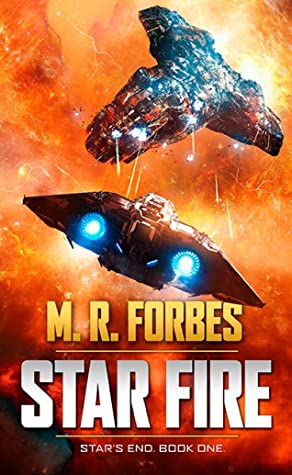 The Commune attacks a remote Alliance base when an unidentified ship appears and attacks the both forces. Now a Commune captain and an Alliance pilot must work together to fight this unknown threat.

Star Fire by M. R. Forbes is another exciting military science fiction novel that finds a divided human species embroiled in a war until they encounter a seemingly overwhelming enemy that forces two officers, one from each side, to work together or risk the extinction of all humankind.

One of the most profound differences between this book and others is that the protagonist isn’t a man at the peak of his prime. Instead, it’s an older man with a family who, like many his age, are counting the hours until retirement and dreaming of days on a warm beach.

But unlike most men, the protagonist Grayson Stone, is a hero to the Alliance and a villain to the Commune for his actions. Having an older hero introduces some interesting baggage to the story, especially a hero with a family.

There’s a simple reason that many protagonists end up being orphans or single. It’s difficult to put oneself at risk when there are dependents. While Stone’s love for his family feels like lip service because they aren’t really part of the story, his protective toward his co-pilot Joie is apparent, though she is literal baggage rather than a figurative one.

Aspects of the story do feel a bit generic. Too many science fiction writers rely on having “communists” as enemies. Star Fire isn’t really any different, though not much is known about the political ideology or structure. Thankfully, the author doesn’t waste too much time detailing the differences between the two parties in this conflict.

While the intra-human conflict rages, a third party emerges that helps explain why the galaxy that humanity inhabits is the way it is. Specifically, a bubble phenomenon surrounds the solar and surrounding stars that prohibits humans from going out farther.

The description surrounding this enigmatic enemy makes them intriguing, to say the least, and their technological prowess makes them quite the adversary, casting humans into a defensive battle, setting up a David-and-Goliath story that is sure to entertain.

This mystery of the barrier, as well as what lies beyond, is perhaps the most interesting aspect of the novel and adds an element of intrigue that goes beyond just one generic faction fighting against another generic faction. While the writing may be engaging and the action scenes well done, it’s difficult to care who wins when it’s between humans, at least from a science fiction perspective.

M. R. Forbes’ Star Fire has engaging action scenes both in space and on the ground as Stone teams up with an enemy and fights not only for his own survival and that of his pilot’s, but also for the survival of all humans.