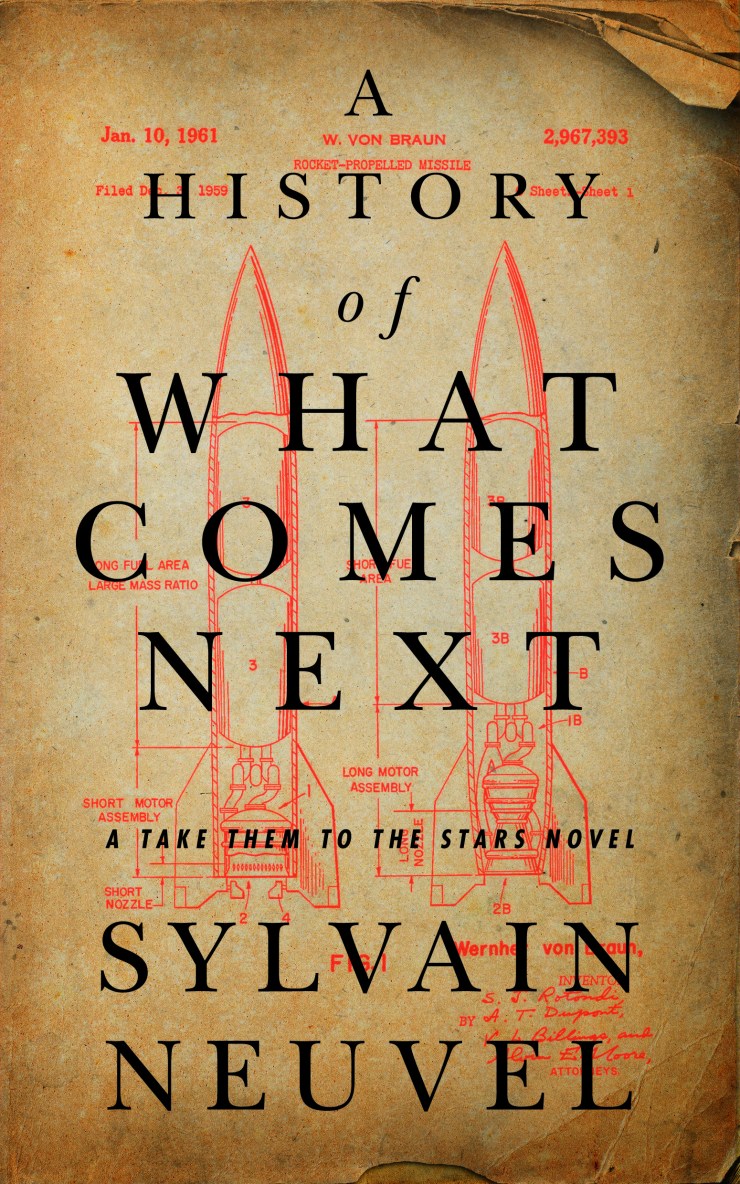 Mi’a, the 100th born in a line of Kibsu, and her mother, strive to bring humanity to the stars while being hunted by a dangerous and persistent foe focused on exterminating the last remaining Kibsu on Earth.

A History of What Comes Next: A Take Them to the Stars Novel Review

A History of What Comes Next by Sylvain Neuvel is a science fiction novel that is a historical retelling of the events surrounding the recruitment of German rocket scientists and the ensuing space race.

Science fiction writers tend to look toward the future for their settings, so it’s not often that readers will encounter a story that is situated in the past in this genre. That makes Neuvel’s novel stand out among other science fiction stories published during the same year. But this unique aspect of the novel can also be what makes it fall a bit short of being a good science fiction story.

The plot is fairly simple: Mi’a, her mother, and her ancestors are survivors of some ancient catastrophe, stranding them on Earth. Since then, they’ve not only had to survive on an alien planet, but they’ve also had to rediscover technology in order to go back to the stars. Meanwhile and throughout the generations, mothers and daughters, for there can only be two, are being hunted by a being that is just as persistent about killing them as they are about getting to the stars.

This cat-and-mouse chase runs its course throughout human history, and the story illustrates this through the use of flashbacks and a spattering of journal entries preserved throughout the ages by Mi’a’s predecessors. These flashbacks are interesting in that they show how influential the ancestral Kibsu were, and in some aspects, the stories here have the potential to be more interesting than the present course of the novel.

What detracts from the story is the historical focus: take away the Kibsu, and what you have is a fictional firsthand account of the events after World War II leading up to the space race in the 1960s. It’s almost as though the science fiction aspect of the novel is secondary, a plot device existing only to provide some rationale for a singular, first-person narrative rather than a third-person omniscient perspective that other writers would have adopted for a novel like this.

The intriguing parts of the story, the science fiction aspects, aren’t really satisfactorily explored. Who are the Kibsu? Where do they come from? Why do they want to get to the stars? So many of these questions are left unanswered, and as a result, the motivations for Mi’a and her mother’s actions and goals feel a bit empty.

There’s almost a sense of two stories going on here: a desire to accurately capture Operation Paperclip and the space race as well as a desire to tell a science fiction story. At times, the story felt more like historical fiction than science fiction, especially with the flashbacks that reveal the struggles endured by previous generations, with my favorite being a fun reimagining of the myth of the Amazons.

What Neuvel manages to do well is to build up a sense of intrigue and mystery surrounding the Kibsu. And the mystery is maintained throughout the novel and to the end, leaving readers with a promise of answers to numerous questions in future books.

A History of What Comes Next by Sylvain Neuvel is a great historical science fiction story for readers who aren’t so familiar with Operation Paperclip and the space race, and the science fiction aspect of the novel will leave readers with enough intrigue to continue with the second book. But for those who desire the more fictional aspect of science fiction, this book can feel a bit slow at times.

Read reviews of other works by Sylvain Neuvel and authors with similar works.

2021 A History of What Comes Next Book 1 Sylvain Neuvel