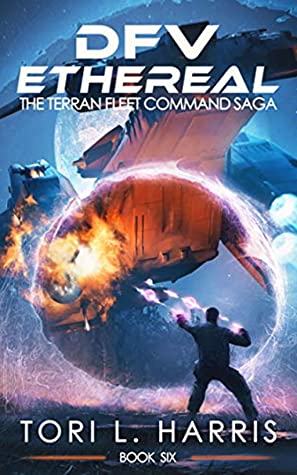 Dreyden must remember who he is in time to help his people fight off the alien Pelaran ship intent on subjugating his world.

DFV Ethereal by Tori L. Harris gives fans of The Terran Fleet Command Saga some much-needed context regarding the Greys and their roles in the galaxy even if the story is focused more on one seemingly insignificant human colony struggling through the medieval ages.

The main character, Dreyden, is enhanced with powerful alien technology and used as a tool for subjugation by a Pelaran AI. Harris incorporates a LitRPG element for Dreyden that feels almost out of place for a science fiction story, with the enhancements becoming “unlocked” as the story progresses.

I’m not personally a fan of LitRPG, and the way it’s used here feels a bit disruptive to the flow of the story. The rationale behind why it’s included for Dreyden makes sense if he didn’t have help in the form of an artificial intelligence. Since Dreyden does have help controlling his powers, it doesn’t make sense to trickle out those abilities since those abilities are managed by another intelligence.

Regardless, some readers may find this element more interesting than a straightforward telling of the story.

While the story is focused on the planet of Didara 4, the presence of the Greys, namely Rick, connects the book to the series. While this book was retitled as DFV Ethereal from The Last Flamecaller, there are enough shared elements to make this book part the series rather than a standalone story.

Harris provides more information about the Greys and their motivations, backgrounds, and purpose in this story, even if this information can feel frustratingly brief at times. What the author does provide only raises more questions about the Greys and their ultimate purpose. Their ubiquitous presence throughout the galaxy suggests a level of technological sophistication and prowess that dwarfs any native species in the galaxy, yet they resort to shadowy tactics instead of outright domination.

The setting for the story takes place during the human medieval period. It’s interesting to note here that the presence of the Pelaran AI doesn’t cause the humans of the time to worship it as a god, even given its demonstration of what must seem like divine power. In fact, quite the opposite happens, and readers are thrust right into the middle of a conflict raging between the humans on the planet and the Pelaran AI.

The conflict between these two forces is enough to make the story interesting, and the action scenes create an element of suspense and tension. A layer of mystery is added with the presence of the “brokers” who help the humans, though fans of the series can likely guess who these brokers are.

DFV Ethereal by Tori L. Harris is good read for fans of The Terran Fleet Command Saga in that it provides some context regarding the Greys and how the Pelaran AIs might have worked in the distant past with their integration program. The use of the LitRPG element may have mixed results, but the action scenes and the conflict between the humans and a seemingly superior force usually make for a fun read.

Read reviews of other books similar to DFV Ethereal.