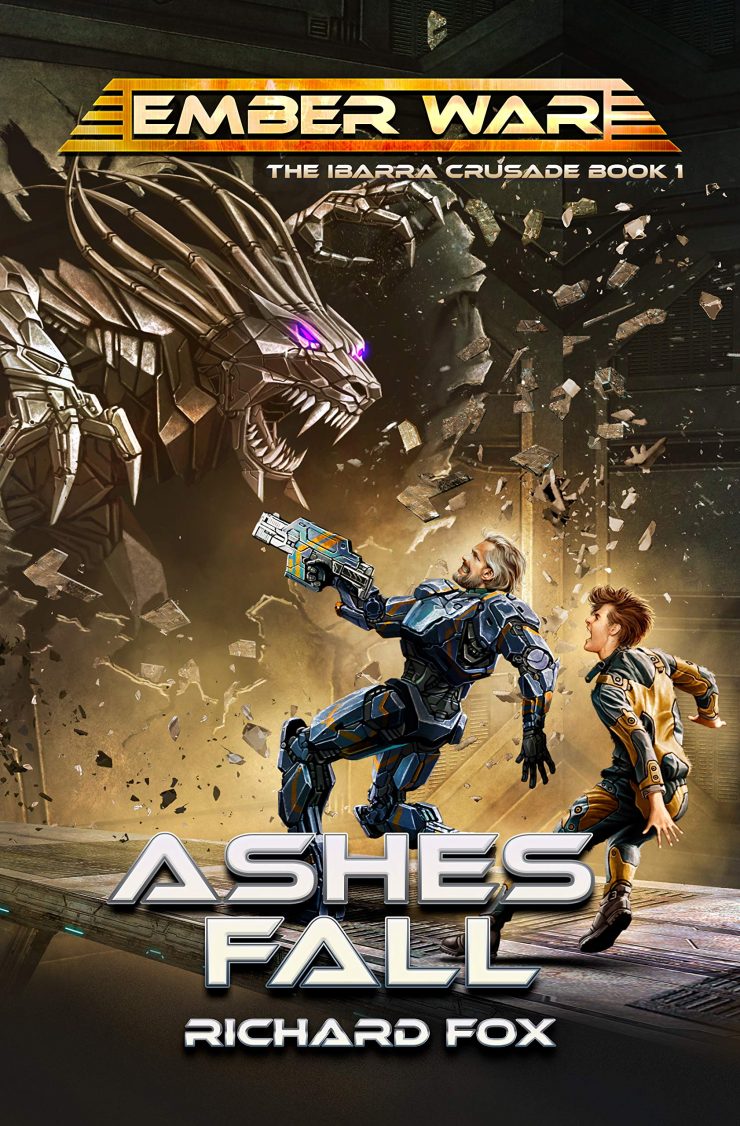 Ely Hale returns to Earth with a Qa’Resh probe fragment in his mind, but little does he know that he returns to a humanity struggling against a Geist enslavement.

Ashes Fall by Richard Fox begins the story of yet another exciting aspect of the Ember War series that features the Ibarra’s crusade against the Geist that have taken over humanity after the defeat of the Xaros and the chaotic consequences of the Qa’Resh’s exit from the galaxy.

One notable difference between the Ibarra Crusade and other spin-offs is that this series features a protagonist Elias, or Ely, son of the famous Ken Hale from the original series, who isn’t as experienced or trained as the other protagonists.

The result is a hero who stumbles through combat and gets lucky too many times against more veteran fighters to feel realistic, though this aspect is mitigated a bit by the Ghost, another favorite character, living in the armor.

Much like the original series, Ely faces seemingly insurmountable odds: he’s perceived as humanity’s salvation from the Geist and Malal in the Milky Way galaxy. How he’s supposed to free humanity and the other enslaved races from the Geist seems a bit of a stretch, but supporting him are some familiar characters, as well as the Ibarran empire.

However, there is a secret weapon that Ely brings with him from Terra Nova, though it remains to be seen how such a weapon can defeat the Geist.

One bit of good news for fans is that that it seems like the differences that separated humanity in the series Terran Armor Corps are inconsequential compared to the bigger threat of enslavement and posed by the Geist. This bigger threat seems to unite the two human factions, with the Ibarras fighting once again to save humanity first from the Xaros and now from the Geist. The results of the war, if won by humans, is a united human front facing a galaxy of aliens now divided by their own interests rather than united by the threat of the Xaros.

While the story is exciting and filled with action and suspense, the story itself builds up slowly with a conclusion that seems a bit abrupt. Still, the foundation laid by this first story promises only a more exciting adventure to come out of Ely’s one-way trip from Terran Nova to a war-torn humanity struggling against the Geist and their god Malal.

Ashes Fall by Richard Fox lays the foundation for what looks to be another great adventure in the Ember War series that is sure to please and excite fans.

Read reviews of other great works by Richard Fox below.