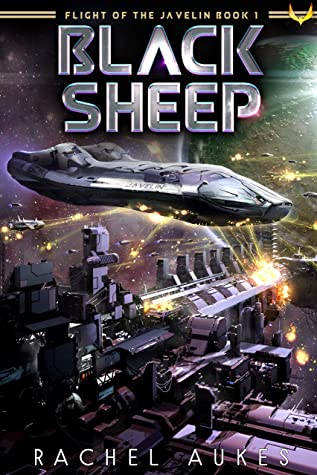 Black Sheep (Flight of the Javelin Book 1) by Rachel Aukes

Captain Throttle and her crew must get their colony ship to its new home in another star system despite the challenges posed by other opportunistic people.

Black Sheep by Rachel Aukes is a fun, action-packed science fiction story with a handicapped protagonist fighting opportunistic humans (vultures), spaceships with more firepower, spies, and even space pirates. While the protagonist Throttle has a physical handicap, that doesn’t appear to stop her in space, an environment that makes her handicap more of a strength than a weakness.

It’s not every day that heroes in stories have a handicap. Too often, these disabilities, or weaknesses in the case of superheroes, are more external–Superman’s kryptonite, for instance–rather than something internal. Perhaps only a few superheroes, like Daredevil, have an actual handicap, though that weakness is offset by superpowers.

Throttle doesn’t have the convenience, but her disability actually gives her an advantage in space. Whereas other people rely on their legs, Throttle’s condition means that she’s able to maneuver better in the zero gravity of space. Perhaps the irony isn’t lost on the people she manages to defeat.

The story itself moves along at a fairly fast pace with one action-packed scenario after another. There’s not much time to get to know the supporting characters except for the former pirate Birk, but what readers do get is the sense of loyalty they have to their captain. The writing itself is relatively simple, lending to the faster flow of the story and the flow of the action scenes.

The universe readers are introduced to in Black Sheep is itself very interesting. Bits of context dispersed throughout the book leave readers wondering about the fate of Sol and Earth, not to mention the Gabriela’s home system, Trappist. Birk’s background provides some clue about the lawlessness and the sense of violence and war that ravaged the colonists of the system.

The prevalence of space pirates in the Trappist system, a crew member who is a former space pirate, and the space pirates running amok all point to a universe that is dangerous. Not too many science fiction stories feature space pirates in such a prominent manner even though the vastness of space makes piracy all that much more lucrative and undetectable.

But the biggest mystery, and my favorite aspect of the story, is the Javelin itself. What, exactly, is it, and where did it come from? Little is revealed about the ship Javelin or its artificial intelligence. What information provided, as well as the brief switch in perspective to the ship’s AI, is contradictory. The result of such a dearth of information leaves readers only wanting to know more.

Black Sheep by Rachel Aukes is a fun science fiction story with almost non-stop action once the story truly begins. And that action goes straight toward the end, promising readers sequels that are just as fun and suspenseful.

Read reviews of books with similar themes below.