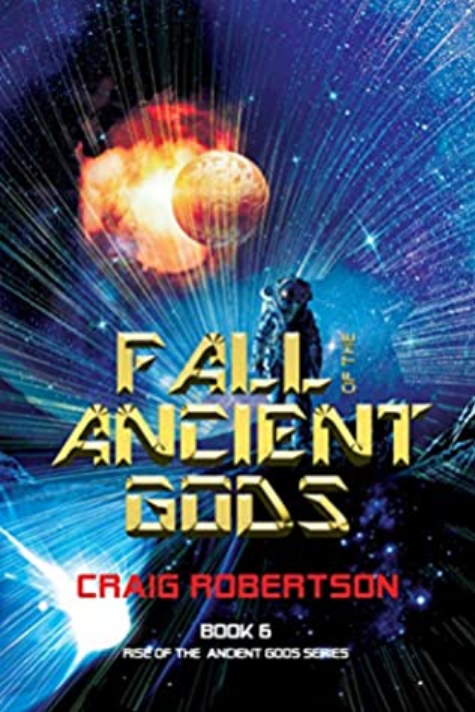 Fall of the Ancient Gods Review

Fall of the Ancient Gods by Craig Robertson is a great, action-packed conclusion to a story that pits Jon Ryan against pantheon of powerful ancient gods. For longtime fans of Robertson’s forever man Jon Ryan, the conclusion of this war was never in doubt.

One of the consequences of being immortal like Jon Ryan is that they outlive everyone except their fellow immortals. That makes being an immortal an incredibly lonely existence. That’s as true for the Doctor in Doctor Who as it is for Jon Ryan in his many adventures as The Forever Man. It’s not surprising then that questions about existence, purpose, and exhaustion come up throughout stories with immortals as protagonists. This question is echoed through the ancient gods, the Stone Witches, and even Ryan himself.

Readers who have followed Ryan through his numerous battles to save the galaxy would have become accustomed to the loss of lives, both his enemies and his allies. But the fates of some of the characters in this Fall of the Ancient Gods feels a bit wrong somehow, almost as though their stories were left incomplete.

As well as the fates of those characters, a few questions remain unanswered: namely, the Stone Witches and Fate. These characters are written into the story with a sense of mystique and wonder that isn’t ever really developed. I suppose further development might reduce their mysteriousness and history, but given that the book is a conclusion to the battle of the Ancient Gods, a little illumination about them would have been nice.

Regardless, this final book in the Rise of the Ancient Gods series provides a satisfying, if not cyclical conclusion to yet another interesting and seemingly insurmountable obstacle facing Ryan. The challenges grow in size for Ryan—they begin close to home with humanity and grow from a local concern to a galactic concern until it’s the entire universe that faces certain extinction.

Every step of the way, Robertson’s writing and Ryan’s humor give the series a sense of lightheartedness that makes the evil less depressing, less heavy to read. In fact, the sense of humor, though tiresome at numerous points, remove that sense of heaviness and despair that can be off-putting for those who read to enjoy and escape a bit.

Fall of the Ancient Gods by Craig Robertson doesn’t really have any surprises for fans of the writer’s work. The title itself already gives away the conclusion of the story, not that the conclusion was ever in doubt. And the ending provides a sense of nostalgia and a desire of the protagonist to return to simpler days. Jon Ryan has vanquished empires and gods. But despite his seemingly dazzling life, he longs for the simplicity that even mortals such as ourselves have access to. A good book, a hot cup of coffee or tea, and a nice, warm reading spot, considering.