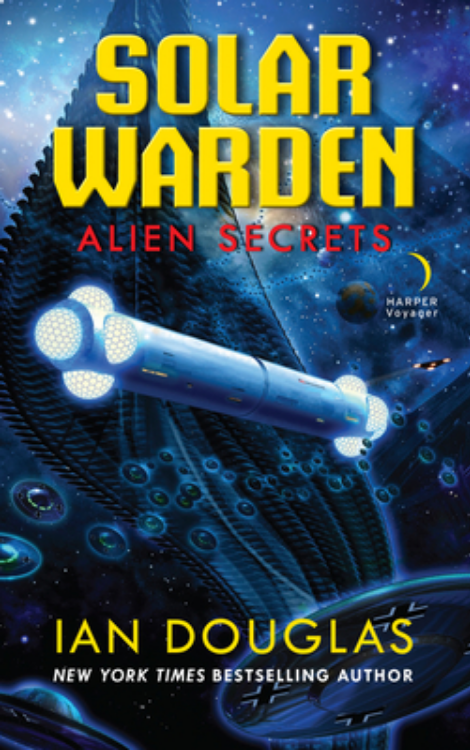 Navy Seal Mark Hunter is sent to investigate a group of Nazis who escaped via advanced technology given to them by an alien species.

Alien Secrets by Ian Douglas is rich with references from UFO lore, mythology, and events. People who have read into the subject will find many familiar references almost immediately: Paperclip, Roswell, and the Battle of Los Angeles, where a UFO was supposedly shot down in Los Angeles during World War II.

These real-world events are highly debatable. While there’s no doubt about Paperclip, many rumors surrounding the scientists are still prevalent. Douglas chooses instead to utilize the mythology as fact, re-imagining a world wherein many of the UFO conspiracies are true. Obviously, this makes for a very interesting story as there are many conflicting ideas, and the adoption of one idea usually precludes other possibilities.

The name of the series itself, Solar Warden, is a reference to a top-secret program a shadow government runs regarding a fleet of ships. All in all, the book is steeped in ufology, and I imagine many people will enjoy identifying these references. In fact, reading the story, I couldn’t help but wonder if the title, Alien Secrets, is kind of tongue-in-cheek disclosure.

Because the book integrates so much of the UFO field, large sections feel like summaries of events or ideas rather than plot development. However, readers who aren’t familiar with the UFO lore will find some of the ideas fascinating—Eisenhower’s supposed meeting with aliens and the signed abduction pact, the Nazi Die Glocke, and other references may encourage others to look into the events that inspired the references in the book. Perhaps such references may reveal more information about the veracity of said events.

In addition to the sometimes exhausting exposition of popular UFO events, the transitions from period to period can feel a bit jarring as the story is broken up with short scenes involving former US presidents.

As far as the plot goes, the heavy UFO references do bog down the story a bit, and in some ways, these references stymie plot progression, as some of the references don’t appear relevant to the plot. Perhaps they’ll play an important role in the sequels.

It’s not until halfway into the story that the plot starts to pick up and the book becomes very interesting. When Hunter, the protagonist, finally begins his mission, the story moves away from the heavy UFO references toward the actual content of the story. The shift from ufology to the plot opens the story to a universe that is populated by some fascinating, and perhaps familiar, aliens.

Still, the basic premise of Alien Secrets by Ian Douglas is engaging, and Hunter’s mission to investigate the Nazis, as well as other events, are creative fiction that fills otherwise very sparse details surrounding the actual events. This interpretation is an imaginative, and perhaps even realistic if some of those conspiracy theories are true, synthesis of compelling events in ufology into a coherent and interesting narrative.