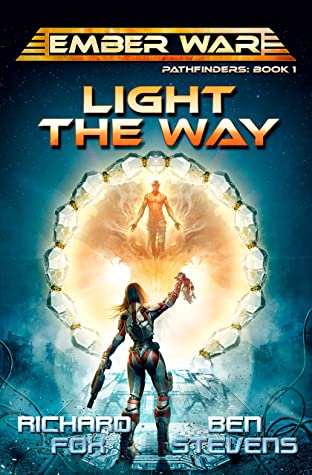 Lieutenant Anderson and his team of Pathfinders head into a mysterious gate for a search and rescue mission, but what they encounter threatens the very universe.

Light the Way by Richard Fox and Ben Stevens reveals yet another perspective into the Ember War universe with the story of a group of scouts called the Pathfinders.

Whereas the other spinoffs to the main Ember War series focus on a continuous plot, the Pathfinders take on different missions, allowing the authors to tell short, episodic stories that provide a nice change of pace from the other series that contain a sustained plot.

What makes Ember War Pathfinders a bit different is that the characters don’t have plot armor like the Redshirts in Star Trek, making every page a nail-biter. The downside, of course, is that readers may grow disappointed by the absence of supporting characters, or characters won’t appear in the next book of the series.

One of the drawbacks of any spinoffs in the Ember War series is that the threats that humanity faces is necessarily less than the threat of the Xaros. After all, what can top the complete domination of an entire galaxy? Still, what Ember War Pathfinders offers is distinctly different from the other doom-impending plots in Terran Armor Corps or Terra Nova Chronicles is a sense of exploration and discovery.

The goal of the Pathfinders is to explore, scout, and search and rescue. Part of that exploration includes the discovery of alien artifacts and mysteries. It’s this exploration and wondrous discovery that makes science fiction so appealing to many fans of the genre. Consequently, this series is perhaps better than the other Ember War spinoffs in that it avoids the sometimes heavy, plodding plot in favor of self-contained, episodic stories. Additionally, the sense of mystery and discovery pervades the book.

Some favorite characters from the entire franchise make their appearance, like the Dotari and Ken Hale. Of course, references to the Ibarras are unavoidable.

While the story itself is interesting, there’s a glaring flaw that seems overlooked by the characters. When facing the antagonists, especially toward the end, the humans use conventional weapons instead of a weapon that was proven to work on such an enemy. The result is that there’s a lot more chaos and destruction, which makes for an engaging story, but it does weaken the continuity a bit.

Light the Way by Richard Fox and Ben Stevens gives readers more of what they love about the Ember War series while adding to the action a sense of exploration and discovery that was missing during the battle with the Xaros.