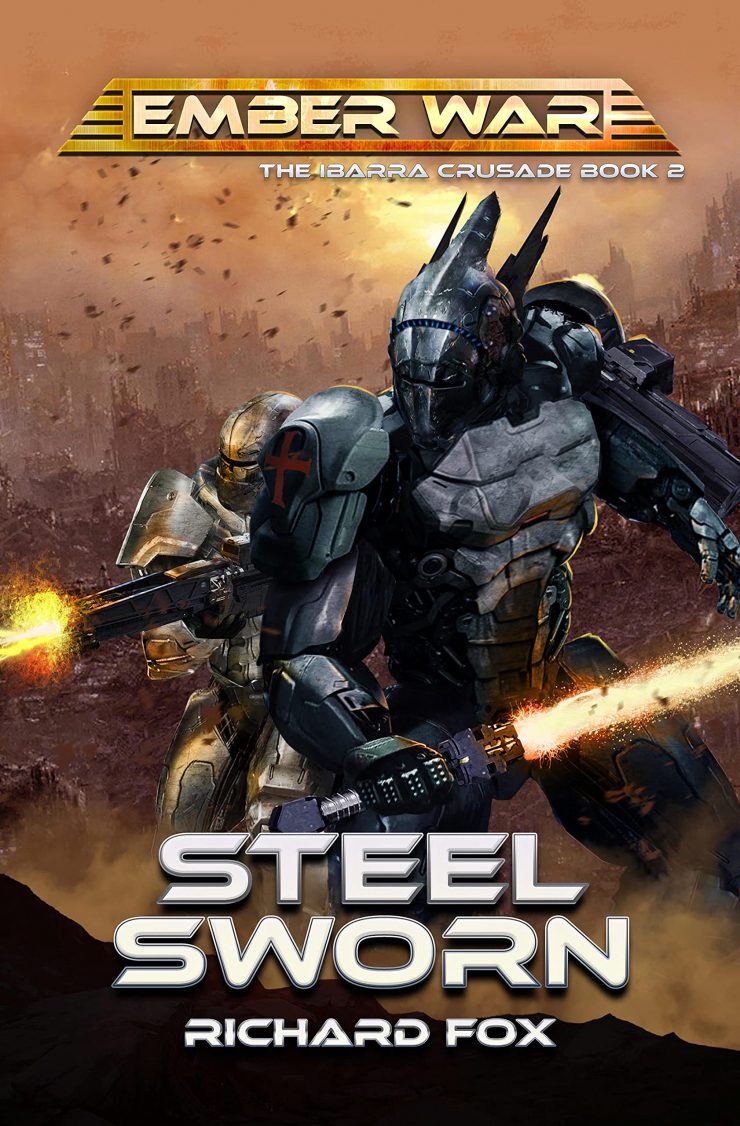 Ely Hale must survive the planetary siege and bring his secrets from Terra Nova to the Ibarran Crusade so that he can save humanity from the Geist.

Steel Sworn by Richard Fox continues the struggle half of humanity, represented by the Ibarran Crusade, against the more powerful Geist and their procedurally-generated and enthralled humans.

Unlike Fox’s characteristically action-filled stories like Pathfinders and other spin-offs, the first two books in the Ibarra Crusade focus more on plot and story development rather than a sequence of action-filled scenes of one battle after another as a group of soldiers face off against seemingly insurmountable odds.

Action and suspense are no strangers to the Ember War universe, so having some character development, especially with someone like Marc Ibarra, is a nice change of pace, especially as it paints him as more human despite his current appearance.

As with the first book, some more popular characters from the original series make their appearance, with a surprise appearance and condition toward the conclusion of the book.

The story continues with Ely’s assignment to a lance and his training as armor. While he manages to stumble his way through with the help of his ghost, Aignar, another character from Terran Armor Corps.

The secrets that Ely carries with him from Terra Nova appear to be able to turn the tide of war toward humanity’s favor so long as he’s able to survive the siege he finds himself under. It’s this siege and subsequent attempt to escape where the story focuses for the majority of this book.

Ely’s lack of armor training is smoothed over by his bridge, Aignar. This makes Ely’s combat inexperience a bit more forgivable—his successes in battle against a more hardened enemy are perhaps the most unrealistic aspect of the story otherwise. This is especially more true considering protagonists of other series tend to be career military and at their prime in health, experience, and training.

One interesting aspect of Steel Sworn is Marc Ibarra’s interrogation. This part of the story reveals some more of Marc’s psychology and emotions regarding the Xaros plague and humanity’s initial extinction, an aspect of his character that was missing in the original series. The Geist’s attempt to break Marc Ibarra and uncover his secrets adds to the suspense and feeling of dread and doom that seem to haunt the Crusaders and their cause.

Steel Sworn by Richard Fox trades the action and battle scenes characteristic of Fox’s stories for more story development, and the result is a slower pacing that heightens and extends the sense of dread that the humans facing the Geist, and readers by extension, must feel.

Read reviews of other exciting works by Richard Fox.