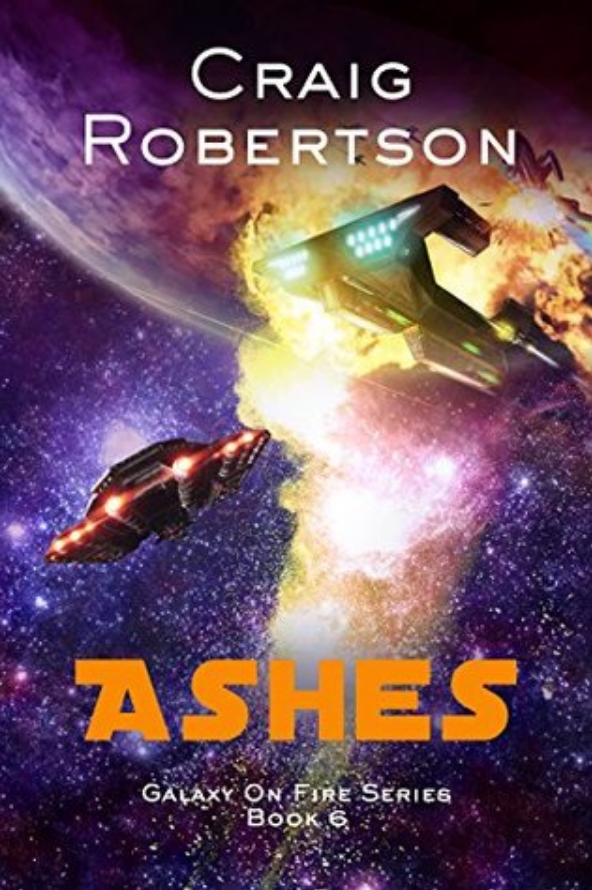 Jon Ryan and his friends and allies face the Adamant empire in this conclusion to the series.

Ashes by Craig Robertson is a great conclusion to the Jon Ryan story in the Galaxy on Fire series that delivers book after book of enjoyment. The sense of humor from the protagonist isn’t as annoying as the first series, The Forever, and it seems like other characters are able to keep his humor in check.

Garustfulous becomes a lot more endearing character in this book, though I wonder if he doesn’t suffer from Stockholme syndrome. The about-face doesn’t seem plausible considering his leadership and lineage, though it was nice to see another ally for Ryan.

The cast of characters will seem very familiar in this book, and it’s reminiscent of the sense of family in The Forever series. It really shouldn’t be a surprise to readers who returns, as the book foreshadows the return very early in the story, and hints of that return were peppered throughout the series. So while it wasn’t a surprise, the return satisfied expectations.

While the enemy is the Adamant, they don’t seem as threatening in this book, especially after the display of power in Dragon Fire. In fact, it’s almost as though the Adamant run straight into a wall that prevents their advance after their defeat by the dragons. Consequently, their threat in this book, though mentioned, just don’t seem as eminent or powerful. The result of a severely diminished Adamant threat means that the story is able to slow down. In fact, the Adamant just seem like a simple spill that needs to be cleaned up rather than a vast, powerful empire that needs to be toppled.

I was happy to have my question about the Adamant origins answered in this book, as it was one of the few questions I had left about the series. Other questions, including the whereabouts of humans were answered in previous books. The last two books in Galaxy on Fire really don’t leave much in terms of loose ends, with the exception of perhaps Ralph. In many ways, Ashes wraps up the entire series quite nicely, even if it was a little too conveniently.

Maybe the largest flaw in this book is that Ryan’s plan, or lack thereof, seems to always work and that the Adamant seem to always fumble despite their strength and prowess. Maybe complacency can explain some of this ineptitude, but after their first encounter with Ryan, I’m not too sure why they didn’t up their security and procedures. Ryan’s plans just seem more lazily thought out and rushed–Robertson could have just avoided stating the plan to begin with and having Ryan carry through instead of commenting about any plan (or lack thereof).

The conclusion of Ashes by Craigh Robertson is satisfying, and the epilogue leaves readers with a promise of more adventures to come. I hope that those adventures include the same cast of wacky characters bumbling through threat after threat and saving the galaxy all the while.