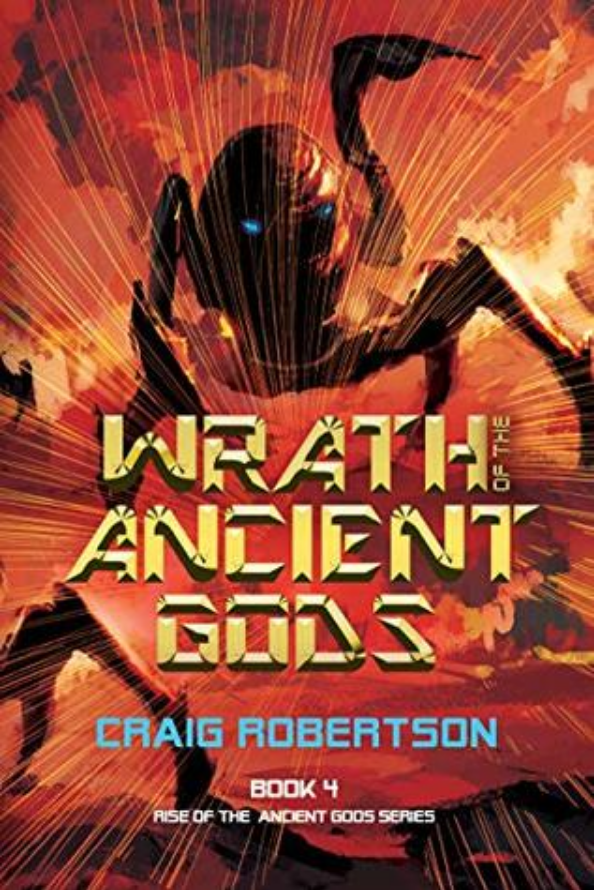 Jon Ryan has to come up with a plan to destroy the Cleinoid gods before they ravish the known universe.

Wrath of the Ancient Gods Review

Fans of Craig Robertson will find another fun, lighthearted science fiction story in Wrath of the Ancient Gods. Readers who have come this far have likely forgiven what criticisms they have about the stories or the writing.

In my previous reviews, I mentioned the sometimes exhaustive sense of humor that diminishes the overall threat that the protagonists face. Whether it’s facing the Listhelons in The Forever or the Adamant in Galaxy on Fire, Ryan not only vanquishes his enemies, but he leaves behind him a trail of annoyed characters who wonder if they weren’t better off being conquered.

Another aspect I mentioned in previous reviews was Robertson’s reliance on using the same structure for Ryan’s adventures. For instance, Ryan captures an enemy, subjects them to his presence, and then converts them to his side using various means. Whether it’s Offlin the Listhelon or Garustfulous the Adamant, these prisoners eventually see the error of their ways and help Ryan.

Wrath of the Ancient Gods continues this pattern, so it’s not really surprising that Ryan has yet another prisoner sequestered in his vortex manipulator. And it shouldn’t be surprising that the prisoner this time Gawar, a powerful prisoner, and that Gawar has seen the error of his ways. However, there’s still that small doubt that perhaps Gawar may not be so easy to persuade.

Despite the somewhat predictable plot elements and sometimes tiring humor, Robertson delivers an engaging story that readers can enjoy and get a few laughs from. The banter among the growing crew makes for some fun moments, and the bigger cast of residents allows more opportunities for humorous dialogue.

And it’s the crew that makes the Robertson’s books and series so endearing. Characters like Sapale, Mirri, and Slapgren have been with Ryan throughout several books, endearing them to readers. As such, there are some moments throughout the book that elicit some emotional responses from both Ryan and readers. It’s because of these moments that readers may forgive some of the more annoying aspects of Ryan’s humor.

Some fun surprises await readers in Wrath of the Ancient Gods by Craig Robertson. Small mysteries like Casper and other elements that Robertson sprinkle throughout the story keep readers interested in wanting to learn more. And perhaps it’s a little fun to see Ryan get a taste of his own humorous medicine when he has to deal with himself.