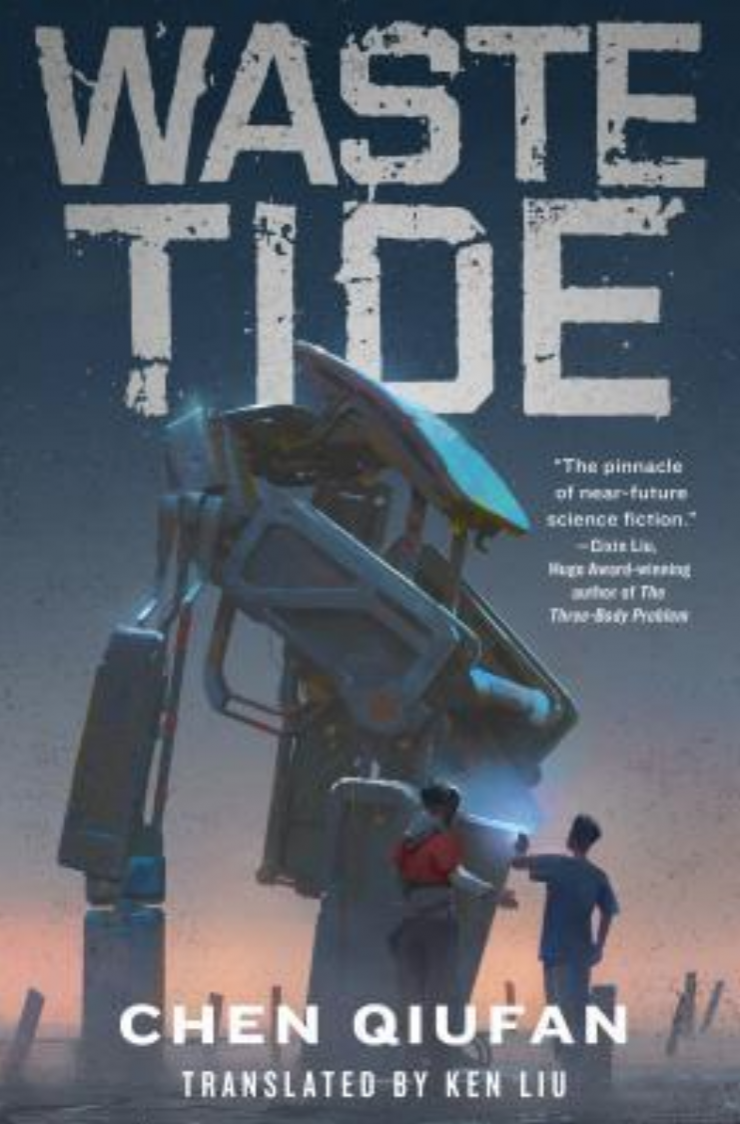 Scott, representing American TerraGreen Recycling, attempts to get the Chinese government and Silicon Isle leaders to change how electronics are recycled. They come to a clash when Mimi becomes infected with a virus that grants her superhuman abilities.

The story itself has some memorable moments, but some American readers may be put off by the vilification of Scott, who represents America and its ideals.

The story revolves around Mimi, a “waste” girl who processes the world’s electronics waste on Silicon Isle. Scott, representing American TerraGreen Recycling, attempts to get the Chinese government and Silicon Isle leaders to change how electronics are recycled. But Scott and all other invested parties come to a clash when a virus infects Mimi and changes her in a way that has severe implications for the future of humanity.

Characters include Scott, an American who represents TerraGreen Recycling; Mimi, a waste girl who processes the electronics waste at Silicon Isle; Luo Jincheng, one of the clan leaders of Silicon Isle; and Chen Kaizong, Scott’s interpreter.

The story takes place on Silicon Isle, an island off the southeastern coast of China that is known as the electronics recycling center of the world.

I have mixed feelings about Waste Tide by Chen Qiufan. The story itself seems plausible in that the Chinese become the world’s leading electronics waste recycler and that an American company wants to go into the field by building an advanced, automated recycling facility.

What the book does well is detail an ongoing dilemma that we have today with automation. While automation is far more efficient, usually safer, and often better for the environment, it also eliminates numerous jobs that people often rely on for their livelihoods. So Scott, and by extension, TerraGreen Recycling and the United States, is seen as a villain. He and the US are there to ruin usurp the status quo, which has provided a lot of people with (poverty) wages.

For the three clans that control Silicon Isle, Scott represents an existential threat to their authority, power, and wealth. So it’s no surprise that the Chinese view Scott with a healthy skepticism. While people may lose their livelihoods, they’ll also be healthier for it since they won’t be handling toxic materials. That Scott actually has an ulterior motive makes him that much worse.

I imagine my reservations about the book are also influenced by the ongoing trade wars going on between the US and China. And I’m cognizant of the fact that the Chinese aren’t always represented in a good light. I suspect that portraying Scott in a slightly negative light and then portraying the Chinese as victims seems a bit unfair. After all, the three clans are exploiting the residents for even more wealth.

We see this early on in the story when one of the waste processors accidentally trips a machine that ends up crushing him. Scott rushes to help, but he realizes that his help is futile—the other Chinese waste processors try to free their companion with a torch, but that only exacerbates the problem. The poor guy ends up burned from the heat transfer.

Who is to blame is a little unclear here. On the one hand, the robotic machine comes from an American business. But the Chinese have no regulation or process in place to safely recycle machines, leaving the waste processors to use unsafe methods and fire pits to melt metals and plastics for recycling.

I imagine the fault here should be shared, and the author doesn’t really blame one side or the other. Still, I had an unnerving feeling throughout the book that America was to blame for everything even though Silicon Isle processes electronics globally. The ending is satisfying in that it shows a victory of one side over the other.

Mimi’s condition was pretty interesting, and though I was a bit unclear about how her abilities came about. The second being or persona occupying Mimi’s body is what makes this story more science fiction. It’s referred to as a virus, but it doesn’t appear to be solely parasitic. This aspect of the story seems underdeveloped, and it’s almost an afterthought in the grander scheme of the politics.

What Waste Tide by Chen Qiufan does well is to deliver a plausible story wherein a whole community—in this case, an island—develops around recycling the ever-increasing mounds of electronics being discarded around the world. This island becomes a breeding ground for new digital viruses that can infect the ever-increasing technology that we integrate into our bodies in form of prostheses, virtual reality, and other implanted electronic devices.

Read a review of other Chinese science fiction works below.