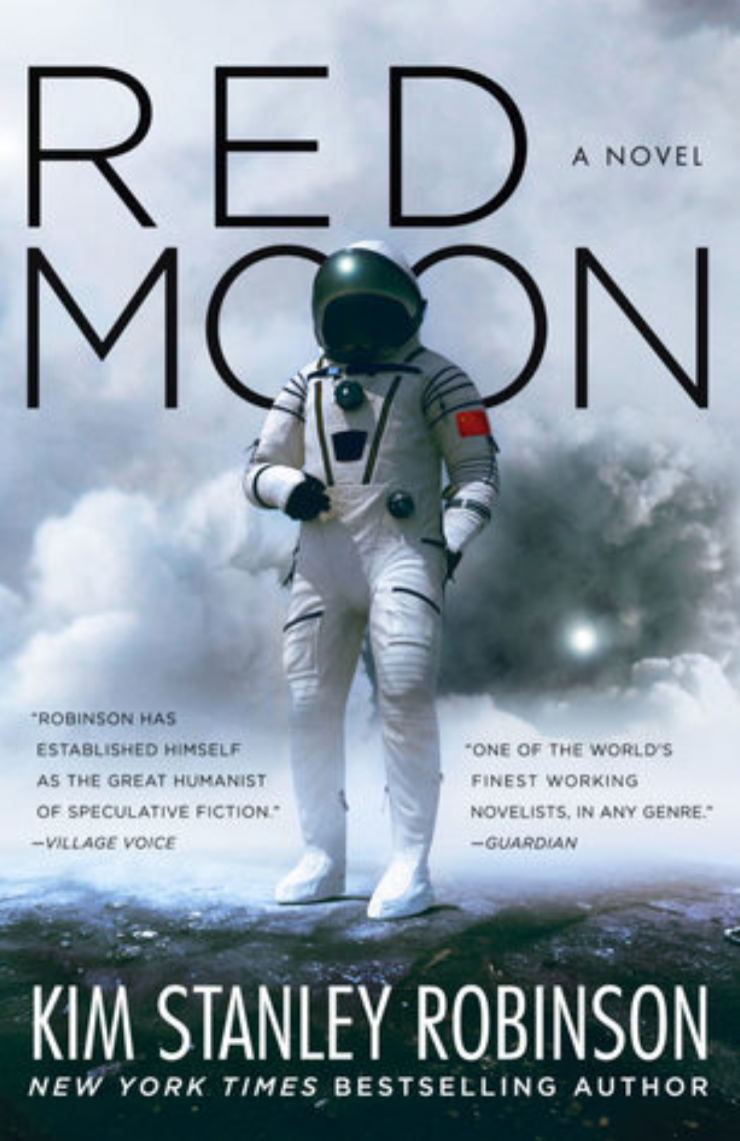 American Fred Fredericks is caught up in a plan to start a Chinese revolution when he runs into Qi while doing a job on the moon.

I’m not sure how I feel about this novel. I enjoyed the story, but the story felt slow in many places. I really enjoy Kin Stanley Robinson’s other works, so I went into Red Moon hoping for the same enjoyment I got from his other works.

While the novel didn’t quite live up to my expectations, the story did paint a very real and very scary picture of an authoritarian government today. If such a government were to become normal, then all aspects of any person’s life can be easily monitored, influenced, and controlled.

An American, Fred Fredericks, is caught up in a conspiracy to start a revolution in China when he runs into Qi, the daughter of a Chinese politician. Fredericks runs away with the pregnant Qi, escaping agents sent to apprehend Qi and stop the revolution.

The two main characters in the novel are Fred Fredericks, an American, and Qi, the daughter of a powerful Chinese politician.

The story takes place on the moon and on Earth.

Too often, American science fiction stories have the United States as the only major space power. Other movies sometimes suggested that China would play a major role in space, but China’s power was often suggested through the dominant language rather than overt political or military power.

Robinson tackles the very real possibility that China or other fast-growing economies may dominate space colonies and development in the near future. And the China in the story is just as flippant about human rights.

There’s a scene early in the story where Qi asks Fred to perform surgery on her to remove a tracking device that’s embedded where she can’t reach. We’ve seen this kind of thing in dystopian stories and other science fiction stories, but it helps to be reminded of the possibility of governments implanting tracking devices in people today. Qi’s tracker isn’t so farfetched considering the Fitbits, smartphones, and Apple watches that people wear today.

Technology today makes the tracking aspects in Red Moon very realistic. And the constantly improving wireless, cellular, and satellite infrastructure means that a person can be tracked throughout the entire world. Reading this particular section, I couldn’t help but think about the controversy going on today with Amazon and the government’s use of facial recognition technology.

What makes Red Moon more scary is that the Chinese government has already implemented some of the more Orwellian practices discussed in the book. There’s a social credit system that can ruin a person’s life just through a chance encounter or discussion. There’s the facial recognition. And there’s the government attempt to silence anyone who speaks out against authority.

What Red Moon does do well is to suggest that against a background of oppression, there’s always going to be someone who is willing to fight for a just cause. In this case, the daughter of the Minister of Finance, is willing to risk her position and security to fight for revolution.

Robinson also suggests that the government’s attempt to limit and control the flow of information can’t succeed when information is freely available—the same systems that allow the government to track its citizens anywhere in the world (and the moon) also allow savvy citizens access to information.

So I suppose the just aspect of the book is that in an authoritarian setting, people will always aspire to freedom. We see this through Qi and the rich Chinese businessman on the moon with his free colony. While the story itself isn’t quite as exciting or action-packed, Robinson does a good job of making us draw parallels to government actions today.

We also see elements of this today all around the world: Hong Kong, Chile, and earlier, the Arab Spring. It gives me a lot of hope knowing that there will be people who are willing to stand up for what’s right.

There are a lot of detours in the novel. Robinson goes off track from the story when he discusses other social issues—these issues aren’t necessarily attributed to the Chinese. But it’s easy to mistake the shared blame for something like climate change when the villain of the story is a faction of the Chinese government.

I enjoyed the story because while it painted a scary portrait of the future, it also gave readers a lot of hope about freedom and justice. Fred and Qi’s survival and escape symbolize the ultimate victory of justice. And that’s enough for me to overlook some of the issues with the book.

Read a review of other works by Kim Stanley Robinson.