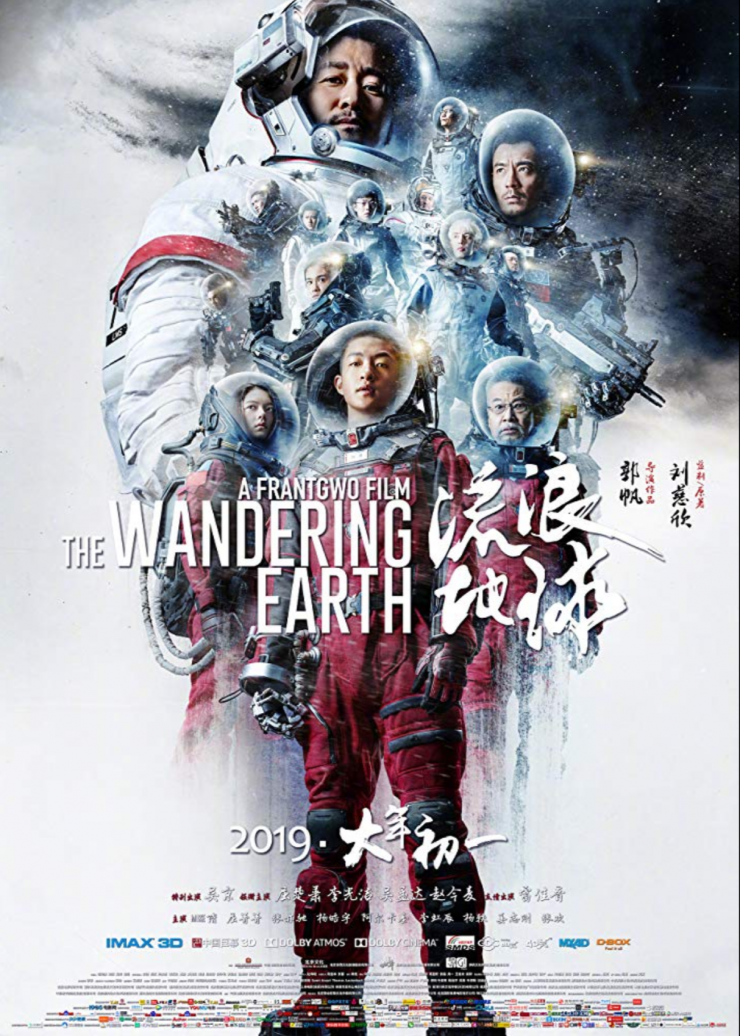 The Wandering Earth is a serious Chinese science fiction movie based on a novel by Liu Cixin that easily matches, if not exceeds, some Hollywood productions.

This movie is based on a novel of the same name by Liu Cixin. Cixin is perhaps best recognized in the US for his Remembrance of Earth’s Past trilogy.

My experience with Liu Cixin’s works is that they can be very complex or dense at times. That may have something to do with the translation and cultural differences.

The visuals are just as stunning as anything Hollywood can put out. If anything, this movie shows how Chinese studios can be serious competition for Hollywood in terms of production quality and cinematography. Going forward, we may see a lot more Chinese movies in the US if they can get their translations and subtitles cleaned up.

If you missed The Wandering Earth in the theaters, you’ll be able to catch it on Netflix in the near future.

The spelling of the names in this review may not match the version you’ll end up watching because of translations and localizations, but they should be similar.

Something happens with the sun that causes it to expand, enveloping all of the planets in the solar system within a certain period of time.

As a result, humans have banded together to move Earth out of the solar system toward another star. Gone are the differences between nations.

Liu Peiqiang is a Chinese astronaut onboard the spaceship that guides Earth to its new home.

Han Duoduo is a girl who Han Zi’ang saved and adopted during the early days of Earth’s devastations.

Other characters, like Captain Wang Lei of the police or military force, round out the character list.

The surface of the planet is now covered in snow it has moved away from the sun. Humans live in vast underground cities, with a select portion of the population living aboard an advanced space station that that guides the planet and provides other logistical support.

I’m not entire sure from the movie what has caused the sun to expand. I do know that it’s what will eventually happen to the sun billions of years from now, but its expansion in the movie takes place within two centuries of our time.

There are a few inconsistencies in the movie, but it could very well be due to my lack of knowledge. For instance, we see China covered in snow. Wouldn’t one facet of the planet be completely dark while another facet be continually exposed to the sun? The movie does mention the deaths of billions of people due to the stop in spinning.

But despite this aspect of the movie, the plot is very interesting and unique, to say the least. I’ve never considered the possibility of moving a planet, but the movie made me wonder just how such a feat could be accomplished, if it could even be done.

There’s a scene where we see Jupiter siphoning Earth’s atmosphere. I’m not quite sure the image was to scale, but it was very disconcerting to me.

There are parts of the movie that contain Chinese mannerisms that would be normal to a Chinese audience but strange to a US one. For instance, when Han Zi’ang shows up to the holding cell and yells at his grandkids for getting in trouble, he behaves like a mother scolding her misbehaving children. The behavior doesn’t seem to befit his age, though I’m a bit familiar with this in other older Chinese shows.

Characters in the West who play grandfather roles tend to give the roles more gravitas that you’d expect from someone so old. Someone like Gandalf from Lord of the Rings comes to mind.

There are a few characters, like Tim, whose presence doesn’t seem to make sense. As a comic relief, he just doesn’t work that well. For me, Tim’s presence seems more of a disruption than a well-timed break from the severity of the situation. The puke-in-a-helmet scene, for instance, was more gross than it was humorous, considering the situation. Though he plays a crucial part later, he seems too much of a generic character.

Han Zi’ang’s attempt to bribe the police chief with a gift receives a retort from the chief as being “traditional” or “old-fashioned,” yet we see him taking advantage of the device during an earthquake. Maybe this is some kind of social commentary about public perception and private practice.

The relationship between Liu Peiqiang and his son Liu Qi seems a bit weak. They haven’t spoken to each other for a long time, and we learn the reason is because of the mother. Their silent relationship seems a bit far-fetched considering how close they are at the beginning of the movie.

Other than those few issues, the movie moves along at a good pace, and it gives audiences just enough action to keep them engaged. If the subtitles and translations were improved, there’d be fewer disruptions to the movie-watching experience.

I’d recommend avoiding the dubbed version if possible. If you’re not accustomed to watching films dubbed in English, then the localizations and the voice acting can be a big turn-off. The dubbed versions may even be a distraction to the story.

The brilliance of the movie is that it introduces science fiction to people who generally avoid the genre because they associate science fiction with Star Trek. While attitudes toward science fiction are changing thanks to the new Star Wars films, movies like The Wandering Earth definitely help make the science fiction genre more accessible and popular again.

Read my review on Ball Lightning by Liu Cixin if you want another story written by the same writer.