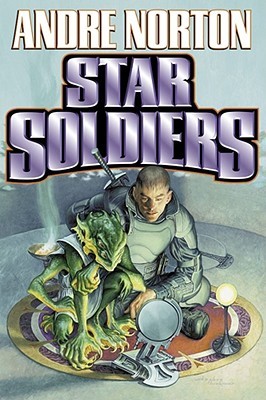 Star Soldiers by Andre Norton, part of the Central Control series, and first published in 1955 easily shows how many military science fiction books today were influenced by earlier works. In fact, it’s easy to forget just how many books today expand upon ideas first explored by writers during the golden age of science fiction during the middle of the twentieth century.

Even more modern stories today, like Star Trek, were influenced by earlier works that have largely faded away in the memories of older readers with busy lives or languish in the dusty corners of libraries awaiting rediscovery by some future intrepid science fiction fan.

Even the earliest science fiction writers adapted their ideas from history. All writers write from the realm of human experience, and Norton is no different. It’s clear that history serves as a template for Central Control, and what history has illustrated is that nothing lasts forever, not even the once mighty Roman Empire.

The writing and plot elements in Star Soldiers seem a bit outdated by today’s standards for technology and science fiction. Older terminology, like “speechers” for long-range communication devices or awe-inspiring weapons like nuclear bombs may have seem futuristic then, but they’re fairly outdated now. Even the label term star soldiers to describe Earth’s mercenary force doesn’t roll off the tongue like star force.

Outdated terminology and fairly low-tech weaponry like swords and rifles aside, the plot about a galactic governing force oppressing humanity or limiting humanity’s expansion to the stars is still explored today by any number of military science fiction writers like B. V. Larson and his Undying Mercenaries series.

In addition to the diction, the tone of the story reads a bit more formal. The discipline that the protagonist shows and the dialogue feel a bit artificial considering the portrayal of humans presented in the story.

What Star Soldiers does do well is to tell a story of how humanity exploits its best and worst characteristics in order to thrive despite the limitations set upon it by a greater force. The atrocities of WWII must have given writers of the period a bleak outlook for some of humanity’s worst traits: brutality, cruelty, and penchant for destruction.

It’s these negative qualities that make humanity an excellent mercenary force that is feared by other aliens. But it’s humanity’s more positive traits—it’s ingenuity or creativity—that allowed people to first imagine space travel and then achieve it. The outcome of these positive traits emerge throughout the story, culminating in the conclusion where readers move beyond a tribal conflict into a more galactic conflict that threatens to upset the status quo.

Star Soldiers by Andre Norton is a great military science fiction story that not only provides an action-packed story but also serves as an example of the sub-genre in its infancy.