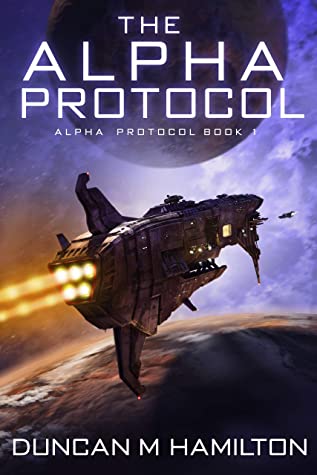 Luitenant Samson investigates a suspicious cargo ship and sets off a series of events that finds him at the forefront of new and dangerous chapter for humanity.

The Alpha Protocol by Duncan M. Hamilton slowly builds the foundation for an intriguing story that pits humanity against a mysterious and superior antagonist. Once the story introduces the villain of the series, the pacing and engagement pick up, leaving the reader with a sense of anxiety and anticipation for the sequel.

The title of the book is a bit reminiscent of the Omega Directive in Star Trek. In fact, there isn’t too much difference between the word directive and protocol. Similarly, the basic structure of the story doesn’t differ too much from the Star Trek episode.

In many ways, The Alpha Protocol doesn’t differ from other military science fiction books that pit humans against a greater opposing force. After all, there’s a bit of hubris in assuming that humans are the most intelligent or advanced species out there. But that’s what makes these military stories engaging and interesting—the classic David vs. Goliath story relies on engaging readers through on well-known conventions while adding twists along the way.

One exciting aspect of the book is the sense of exploration and discovery of new technologies, ideas, and yes, even the eventual encounter with the other. It’s how humans act in the face of the other that makes the story interesting.

Whereas the plot may be engaging, the characters are a bit weak, perhaps because of the decision to have the majority of the named crew go against the protagonist, resulting in a gap that is too wide to bridge. The result of this distance means that the protagonist, Samson, has no real relationship with his crew.

Instead, the supporting characters, like the shady businessman, are more interesting, and this relationship, though interesting, overshadows and surpasses any potential relationships Samson may have with his own crew members, regardless of their previous actions.

Ultimately, the stiff relationships between Samson and his crew make it difficult to get to know the characters, giving the story a sense of a generic feel with the cast of characters.

The Alpha Protocol by Duncan M. Hamilton contains elements that military science fiction fans will all love: space combat, superior and mysterious enemies, technology, and discovery. It’s a solid story, and the sequel promises to be more engaging.