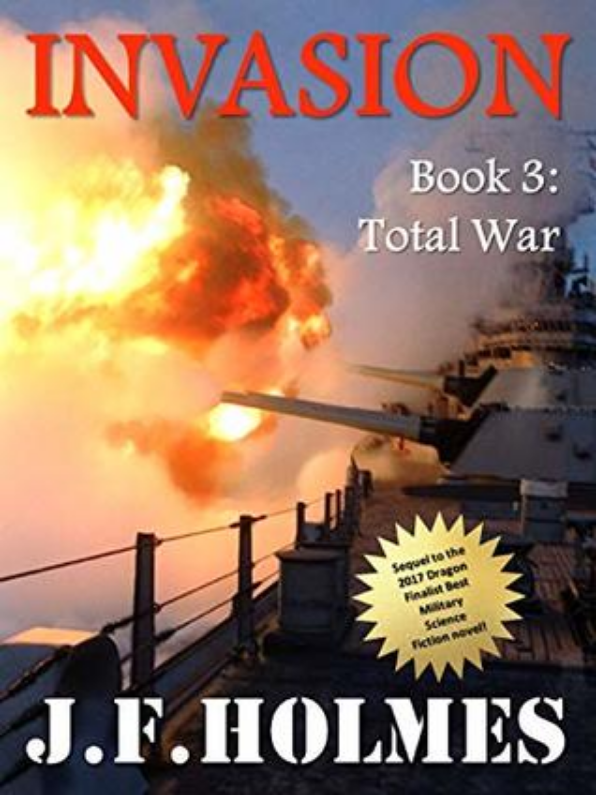 Invasion: Total War by J. F. Holmes resumes from its previous book with an exciting, action-packed war against the Invy. Readers who have read the books thus far will find no faults with this story. On the contrary, this conclusion to the series is more exciting, increasing the stakes of defeat with a bit more focus on humans being used as livestock by the invaders.

As with the second book in the series, Invasion: Day of Battle, this conclusion to the trilogy is just as exciting, including a bit more science fiction elements like artificial intelligence and some discussion as to the background and hierarchy of the Invy.

Casual readers may find some of the names difficult to track, especially if there are long enough breaks between each book. With so many different battles taking place and with the amount of character deaths, it can be difficult to remember who is who save for the main characters like Warren.

As I had hoped, this story reveals more about the artificial intelligences created by humans. Their personalities, control of the ships, and thoughts all contribute to some interesting concepts that make science fiction appealing to many readers.

The seemingly realistic depictions of battles and the brutality that the aliens display make each battle scene grisly. And knowing that no character is safe from death can make readers feel a bit of anxiety about who will go next and in what manner.

I almost wish more was done with the uplifted species, but this entire series does a good job with illustrating some of the complexities of war: the spread and indoctrination of propaganda by the victorious, the resultant enemy sympathizers, the senseless deaths, and other atrocities. Outside of the Invy’s consumption of humans—they prefer fresh meat—history shows that some of the ideas in the book aren’t too different.

Invasion: Total War by J. F. Holmes brings to end an engaging and edge-of-your-seat story of humanity’s fight for freedom against seemingly overpowering aliens. Those who enjoy detailed fight scenes on the ground, in the air, and in space will not regret reading The Invy War. It’s a series that starts off a bit slow, gradually picks up, and doesn’t stop until the end.

Read a review of the other books in The Invy War by J. F. Holmes: