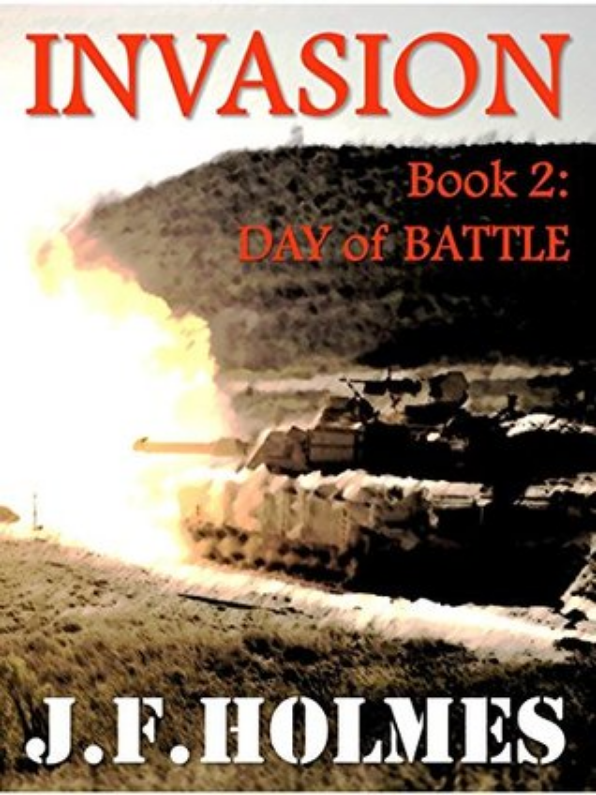 The Confederated Earth Force launches its all-out surprise ground, air, and space attack on the Invy, and their failure or success will determine the fate of humanity.

Invasion: Day of Battle by J. F. Holmes continues with an exciting and action-packed story that not only keeps readers engaged throughout the entire book, but leaves readers wanting the next story in the series.

Whereas large sections of the first book, Invasion: Resistance, felt a bit slow at times, the investment the first book required in terms of establishing the context and characters pays off in this second installation.

Holmes describes many of the battle scenes in detail, and some of the battle scenes illustrate the horrors of war, requiring soldiers to compartmentalize their emotions in order to remain focused and survive. Whereas some fiction writers tend to interrupt horrible scenes with some sort of commentary, Holmes avoids inserting himself, allowing the horrors of war to speak without a filter.

Since humans are already at a huge disadvantage in this war, there are a lot of deaths that make the first book appear almost tame. And the almost journalistic reporting of the consequences of war gives the story a detached, unique perspective. I imagine that soldiers who see a lot of fighting adopt a similar attitude in order to survive.

What I especially enjoyed in the story are the vivid details of the fighting on the ground and in the air. There’s no feel-good story here about humans exacting revenge, and the story illustrates the complexity of war: the sympathizers, the sacrifices, the deaths, and the meaningless losses as a result of simple mechanical failure. There’s no cover here: readers will experience humanity’s last, desperate struggle against the Invy in this story.

Because of the action-packed scenes, I felt that the pacing of the book was too fast. Whereas the first book was slow at times, Invasion: Day of Battle went in the opposite direction and concluded too quickly, leaving me wanting more.

The focus David Warren in the first book leads readers to expect more of David Warren, but he’s noticeably absent here. While Warren makes an appearance, the focus is instead on the soldiers on the ground (and in the air). The third installation promises a return of David Warren, and it should be as exciting as the second story.

Readers who have continued reading Invasion: Day of Battle by J. F. Holmes will be rewarded with non-stop excitement and plenty of military action as the remnants of Earth’s armies go all out against the Invy. The sense of desperation and urgency experienced by the characters are reflected through their actions and sacrifices. There’s no disappointment here until readers realize they’re at the end of the book.

Read a review of other books in The Invy War.