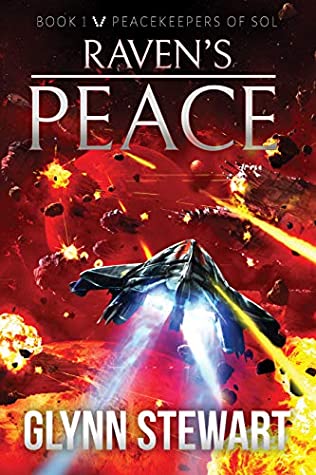 Captain Henry Wong, the exterminator of the aggressive Kenmiri, is sent to a Gathering to help negotiate a peace for the United Planets Alliance with former allies during the war against the Kenmiri.

Raven’s Peace by Glynn Stewart is a great military science fiction novel that thrusts readers into an exciting universe where humans and their allies have emerged victorious over the invasive Kenmiri empire, but their victory is only the beginning as the downfall of one dominating empire leaves room for others to take its place.

I’m no stranger to military science fiction novels. Most novels in this genre tend to rely on action and space battles to carry the plot forward, with the motivations or the premise of the conflict being very weak. In many cases, the reason for the conflict is “just because,” with one side being “right” and the other “wrong,” with names like “United” and “Alliance” that cue readers into the “right” side.

In that respect, Raven’s Peace isn’t too far off–the United Planets Alliance, or UPA, is the force of “good” in this galaxy. But where the story differs is in the author’s decision to begin at the end: rather than start at the beginning of the conflict, readers are thrown into a universe barely finding itself out of one chaotic time and into another.

Starting the story at the end of the war also gives readers the sense that this story universe is “alive.” The lack of explanations for the Kenmiri war and their empire means that the story is less being “told” and more true to the protagonist’s perspective.

One additional bonus is that with the Kenmiri gone, there’s both a sense of uncertainty and promise: how will these once-captive alien civilizations react to their newfound freedom and what bright future awaits them, if they’re able to maintain their alliance?

Some readers may find that the lack of information about the Kenmiri a bit discouraging, though the novel suggests more information will be forthcoming.

What Stewart does well to “ground” the fiction in science is by describing the limitations of the ships. These space battles aren’t described in a way that completely ignores the science part of science fiction.

Missiles don’t fly across the vastness of space and hit their targets or are intercepted, nor are star fighters or ships immune to the stresses of acceleration. Elements like energy requirements and ship or kinetic weapon speeds are described, giving readers a sense of realism that some science fiction writers ignore in the interest of action.

But these more realistic story elements are also balanced with more exotic technologies like gravitic shields. The inclusion of these physical limitations and exotic technologies creates an ideal military science fiction that feels like it can be real.

Raven’s Peace by Glynn Stewart is a great start to the Peacekeepers of Sol series, and the uncertain nature of setting in this first book means that the sequel is more open-ended, with just enough villains to create a sense of unease for the characters and a feeling of anticipation for readers.