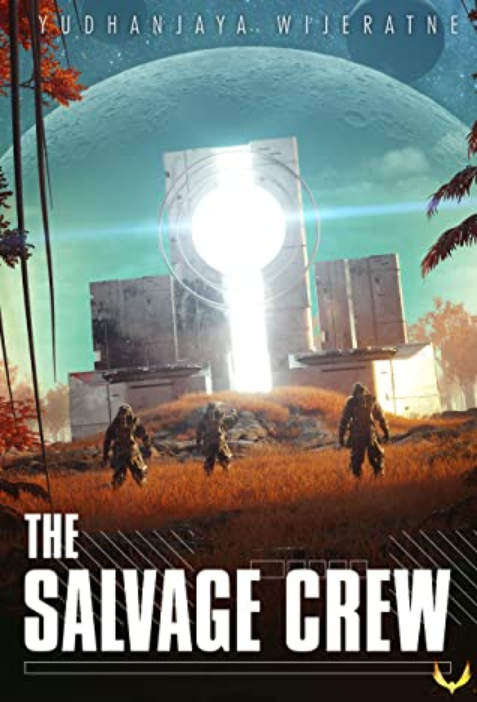 The Salvage Crew by Yudhanjaya Wijeratne

A salvage crew is sent to a faraway planet to salvage an ancient UN ship. What was supposed to be mundane job turns into a struggle for survival as the crew faces numerous dangers.

The Salvage Crew by Yudhanjaya Wijeratne starts off slow but gradually evolves into a story that’s well worth the time investment that readers put into it. If there’s one disappointing aspect of the story, it’s that it ends too soon. The revelations toward the end only raise more questions about the universe the characters live in than it provides answers or a semblance of a conclusion.

What starts off as a fairly “standard” science fiction story about a crew of salvagers on a mission to recover a crashed ship gradually turns into a story that inspires the imagination and raises questions.

Of course, there are some unique aspects to the story that keeps readers engaged during the earlier parts of the book. First, the overseer named OC is an interesting choice in that it’s a human consciousness crammed into a computer and powered by a nuclear power source. In a sense, having a human consciousness instead of a true artificial intelligence gives the writer an excuse to have a more dynamic style of storytelling than simply having a true AI, giving the book a sense of authenticity.

There’s a sense of hard science fiction in the story that is illustrated through the limited supplies and the constant search for energy. This gives the story a sense of urgency and despair not unlike The Martian. The characters have to decide how to maximize their energy reserves while maintaining a sense of comfort and sanity. This fine balance between comfort and pragmatism does take a toll on the characters, giving the story a feeling of suspense and dread.

It’s this struggle for survival on an inhospitable planet that misleads readers into a false certainty about the direction of the story. The change in character perspective reaffirms the story’s seeming focus on survival rather than exploration.

So it’s a surprise when the story shifts direction. And once that shift occurs, the pacing and feel of the story picks up significantly. It’s just unfortunate that the questions raised by the new development remain unanswered for the rest of the story. I found myself more curious about the new events and what will happen after than the what has occurred.

So if anyone is a little “bored” of what appears to be a slow, inconsequential story about a salvage crew performing a salvage operation on some faraway planet: keep going. The at-times trudge will be worthwhile.

Even if the pacing feels a little sluggish, the protagonist’s character and writing style do help the story along.

One interesting idea the The Salvage Crew raises is that of language. I was reminded of the movie Arrival and the alien’s use of symbols for language. Anyone who speaks two languages understands how one language can be inadequate or inefficient in expressing certain ideas. This does raise some questions as to how a symbolic language might work.

The Salvage Crew by Yudhanjaya Wijeratne is a story that delivers its real action and science fiction toward the end. But to get there, readers question the viability of continuing. The answer is that the conclusion is worth the wait.

Read reviews of other books with similar themes.