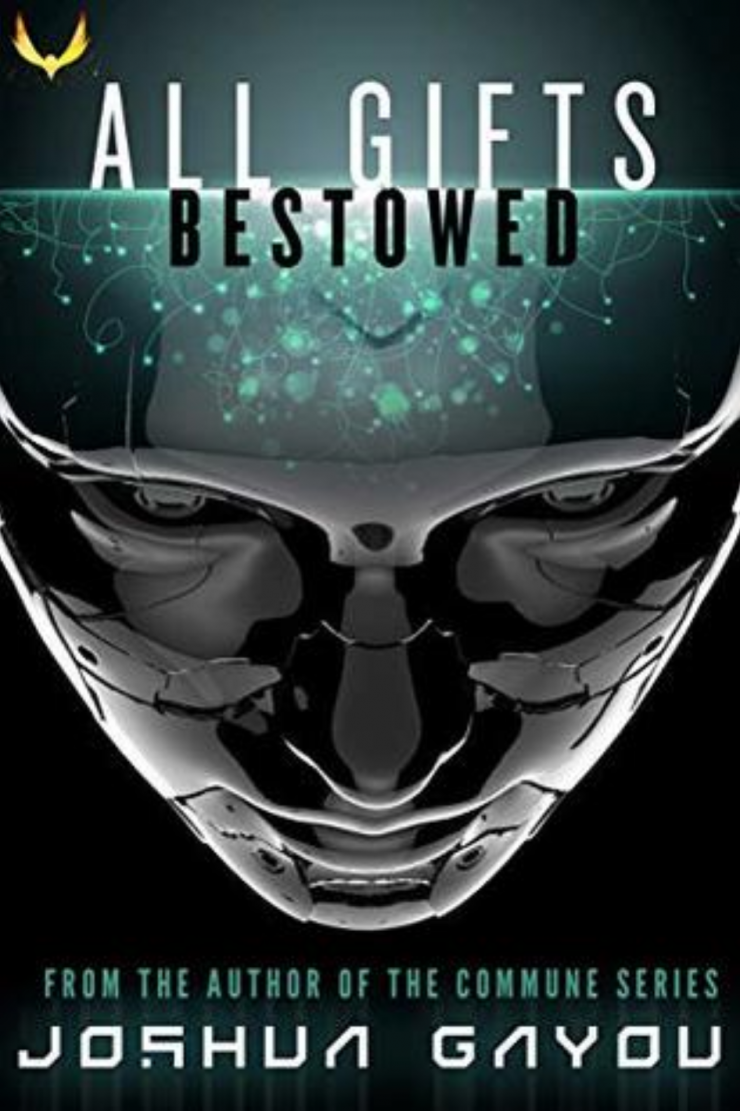 All Gifts, Bestowed An Artificial Intelligence Thriller by Joshua Gayou

Gilles Guattari is hired by Anagnorisis Technologies to investigate why their newest super quantum computer says, “No” when asked to perform a task.

It took me awhile to warm up to All Gifts, Bestowed by Joshua Gayou, but once the story picked up, I was really interested in the story. What really struck me was the impact that Cronus and systems like Cronus had on the nation and the world.

Gayou asks readers to consider our narrow definition of life and how we might apply it to our own creations in the future. There’s some metaphysical discussion in the story, but it’s fairly light.

Gilles Guattari is hired by Anagnorisis Technologies to investigate Cronus, the world’s first significant quantum computer, when it refuses to perform a task. The development of Cronus slowly transforms and automates the world.

Guattari is tasked with figuring out why Cronus refuses to carry out a task, and what he discovers about Cronus has some significant implications not only for the future of Earth and its people, but also for our very understanding of life.

The story takes place in the near future within the United States.

One of the strongest aspects of Gayou’s All Gifts, Bestowed is his discussion of a society wherein technology and automation have eliminated countless jobs. While the loss of jobs to automation is expected, Gayou, at times, treats this consequence almost casually. Yet we’re given glimpses into the damage automation has done: Guattari’s discussions with Dora show the damage and poverty caused by automation and robots.

The existence of semi-intelligent or aware computers and robots eliminated most labor-intensive jobs, leaving a large number of people in poverty. This was more troublesome for me than the danger that an entrenched Cronus in global systems.

The world that Gayou paints is bleak, and it doesn’t inspire much hope or desire for automation. If anything, it reveals a need for us to change our marketplace to focus more on people rather than profits.

Cronus devises an experiment to show that he is self-aware. It’s an interesting dilemma that Cronus faces: how can it redefine consciousness (or life)? Even the Guattari switches pronouns between “it” and “he” to reflect his attitude toward machines.

In fact, Cronus’ entire experiment to get Guattari to first anthropomorphize and then humanize his companions is pretty brilliant. The experiment is maybe a success when Guattari accepts Sigma, though one could argue that Sigma is just following a command. Still, the change in behavior is a stark contrast to how Guattari treated Sigma when they first met.

Guattari’s journey with Dora and Sigma allow them to form bonds, and while there’s a clear bond formed between Guattari and Dora, the relationship of those two with Sigma is rockier. However, they’re all friends at the end, and I couldn’t help but feel bad about Sigma’s fate and a little resentment at Guattari’s failure to ask after the robot.

I’d recommend the story for those who like more realistic science fiction. Advancements in technology are happening so quickly today, and quantum computers are becoming larger and faster. Even large technology companies use quantum computers for research. It’s just a matter of time before their abilities can reveal the mysteries of the universe to us. I just hope that we get something more like Cronus instead of something starkly objective.