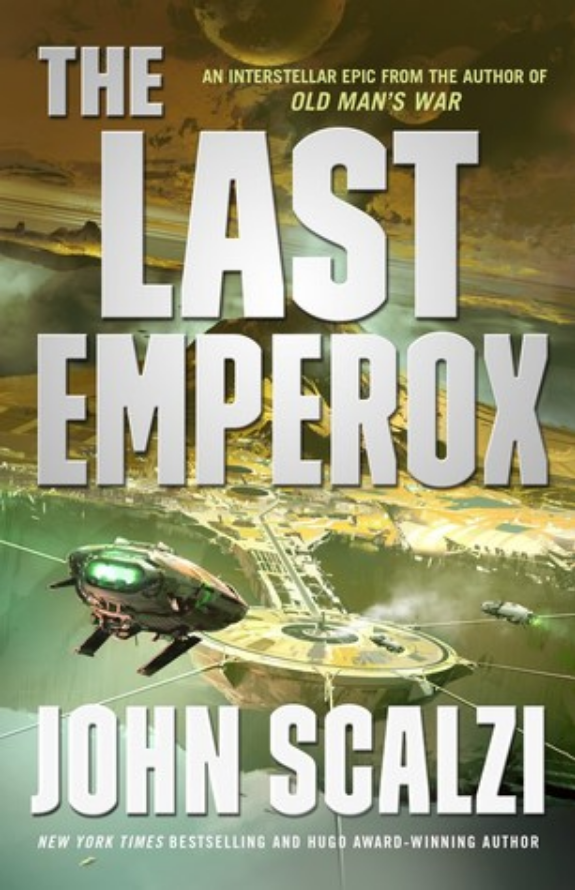 The Last Emperox (The Interdependency Book 3) by John Scalzi

Emperox Grayland II faces the most critical trial of her rule: to save The Interdependency from the collapse of The Flow, a system that permits interstellar travel. Meanwhile, the Nohamapetans’ scheme to claim the throne of the Emperox, control access to the last habitable planet, and profit from the flow collapse.

The Last Emperox by John Scalzi provides a satisfying conclusion to the story of The Interdependency, and while I wasn’t happy with how one character turned out, the overall story wraps up nicely, leaving some room for the imagination as to the direction of the story universe.

I’m not normally a fan of political dramas in science fiction, nor am I a fan of spy novels, but Scalzi does an excellent job in keeping the reader’s attention through his easy-to-follow writing style and his dynamic characters.

The characters in the story are differentiated enough and have such colorful personalities, especially Kiva, that the scenes are enjoyable and engaging. The relationships between the characters are decent enough, with the two romantic relationships uplifting the otherwise frustrating mood caused by the antagonists in the story.

When readers learned of the purpose of the memory room in the previous book, that purpose took out a lot of the fun and surprise of uncovering and then disrupting all of those conspiracies. After all, where’s the fun when one side knows everything? With this omniscience in mind, it doesn’t make sense to me what happens to one of the characters near the end. This particular aspect of the story felt a little rushed.

Throughout The Interdependency series, readers were reminded of the separation from Earth and the other free systems. I was hoping we’d learn more about the history, but that wasn’t the case in this book. Perhaps a novella would do well to cover the initial Flow collapse or to provide some insight into what happened to the rest of humanity.

The end of the novel raises a lot of questions about both the future of the citizens of The Interdependency and how the rest of humanity fared in the centuries since the planets were cut off from Earth. I admit, this was more interesting to me at times than the scheming and political maneuvering in The Last Emperox. Some of my motivation came from the desire to learn more about this aspect of the story.

The Last Emperox concludes the rollercoaster ride of a story that John Scalzi began in The Collapsing Empire. The political maneuvering and counter maneuvering felt at times like a spy versus spy game.

The story’s progression is maintained by a cast of colorful characters, most of whom are self-interested, struggling to benefit from what is potentially the end of their lives as they know it. The conclusion leaves readers with a sense of satisfaction for the antagonists and a bit of hope for the survival of The Interdependency and its citizens.

Read a review of other books in The Interdependency by John Scalzi: