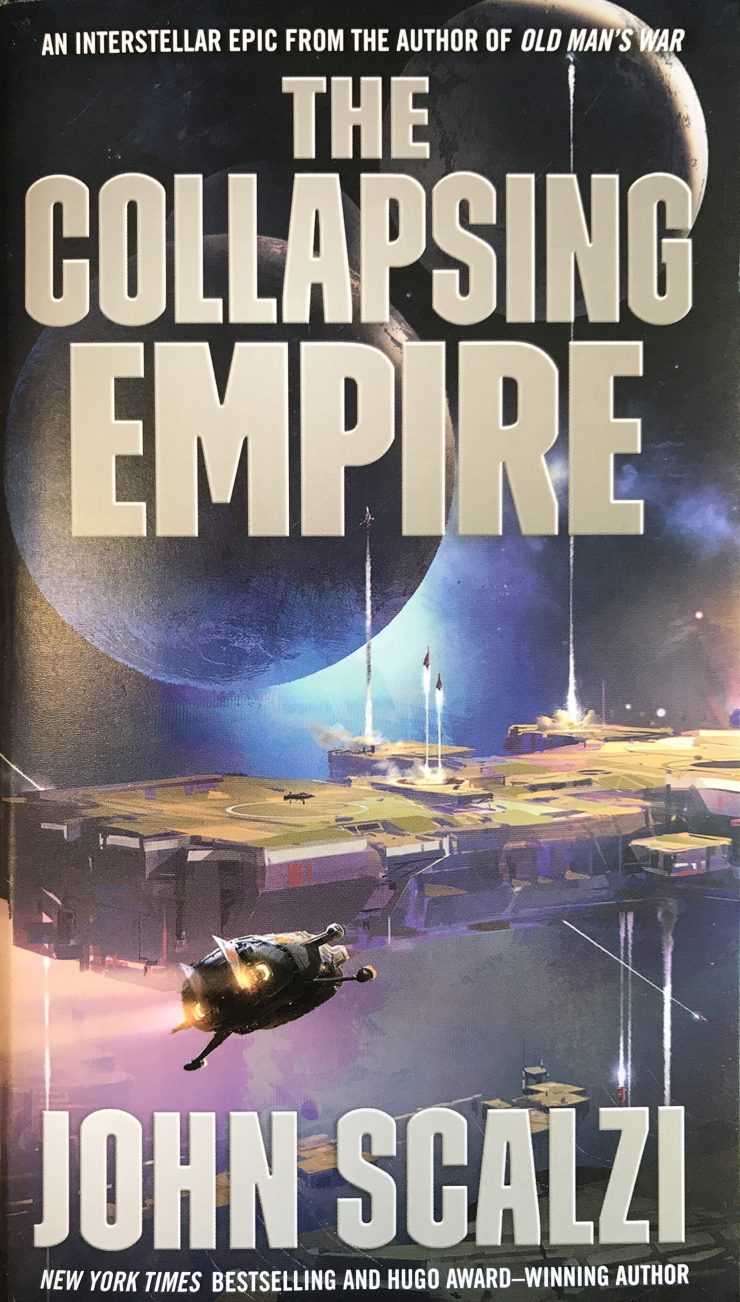 The Collapsing Empire (The Interdependency Book 1) by John Scalzi

A galactic empire of star systems is connected by a network of streams called the Flow. The Flow allows faster-than-light travel, but now it’s starting to collapse, isolating star systems from one another.

The Collapsing Empire is a change of pace for the types of books that Scalzi delivers, especially if you’re looking for more of the Old Man’s War series.

Missing is the casual, humorous, first-person soldier’s perspective in a war. But in its place, you’ll find a broader story that centers on how one piece of infrastructure that’s taken for granted can lead to the downfall of the Interdependency empire.

The Flow, a network that permits faster-than-light travel from one star system to the next, allowed an empire to grow to many star systems.

But all of that is coming to an end when entrance and exit points to the flow shift or terminate, and only Count Claremont who lives on End, at the farthest system in the empire, realizes the danger this change poses. Claremont sends his only son, Marce, to warn the Emperox and the rest of the empire about change before it’s too late.

Marce is the son of Count Claremont, whose research shows that the Flow changes every so often. Both are physicists.

Emperox Grayland II, or Cardenia, daughter of the former Emperox Attavio VI, inherits her father’s position as the religious head of empire.

Other characters include heads or family members of the Interdependency’s trading houses.

The story takes place across the Interdependency, but two prominent locations are End and the Hub, a crucial nexus of trade that connects numerous star systems.

What makes John Scalzi’s writing approachable is that he tends to be very straightforward. The Collapsing Empire is no different. You know you’re going to get a story about the fall of an empire, and you know that with other stories about falling empires, there’s going to be a lot of political intrigue.

But the name of the series gives you some clue as to the severity of the fall. Calling themselves the Interdependency may give the people in charge a sense of solidarity and cooperation, but their real feelings about one another become clear when they’re faced with the very real change in the Flow.

The style of writing in this book goes at a much more casual, slower pace than other books. The lack of action, fighting, and wars means that the readers have to rely more on the plot to carry their interest than showy space battles.

Many elements of the story will be familiar to readers. The Interdependency is controlled by different trading houses controlled by dynasties. You can think of them as corporations, and each corporation manages a part of the economy: shipbuilding, farming, and trade are a few examples.

The difference is that Emperox Grayland II or Cardenia, is the head of the religious organization in the Interdependency. Her father’s death, and her subsequent coronation as the Emperox, means that she not only has to deal with the Flow shift, but also the political opponents who want her power.

Cardenia is also an interesting character, and seeing the contrast between her public and private persona really humanized not only her, but her position as well.

I’ll admit that I’m not usually a fan of political thrillers. Because of that, I didn’t find the plot too appealing, but the strength of the story, the writing, and the characters kept me going. I wanted to see how the Interdependency would break apart and how each system would manage.

Given human behavior, I wouldn’t be surprised if you have the various dynasties fighting one another for ultimate control over whatever systems remain connected. I imagine that this will be the scenario in the following books, unless scientists have some breakthrough that’ll allow them to understand and manipulate the Flow.

Some interesting aspects of the book include the fate of Earth. We learn that it’s not really connected to the Flow, and that the changes to the Flow will ultimately shift the balance of power in the Interdependency. Maybe we’ll see more of Earth in subsequent books.

There aren’t many science fiction stories that are political thrillers. One that comes to mind is Yoon Ha Lee’s Machineries of Empire. Whereas Lee’s trilogy involved space battles to achieve power, Scalzi’s Interdependency prefers subterfuge and backroom deals.

I’m likely to continue with this series. The story is interesting enough, and I’m curious as to the fates of Cardenia and the rest of the isolated systems. How will they manage to survive if they relied on food imports or if they weren’t self-sustaining worlds or stations? I just hope the next books address some of the fates of these systems.