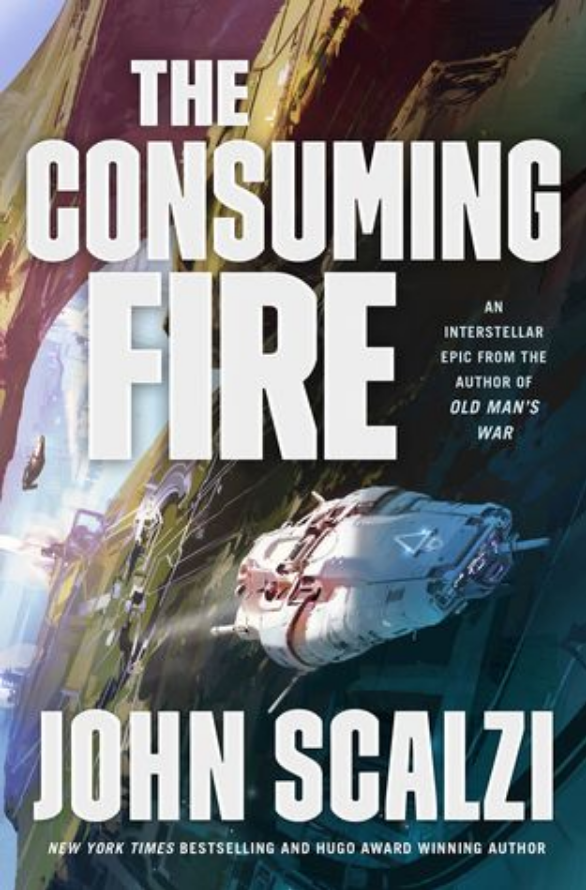 The Consuming Fire (The Interdependency Book 2) by John Scalzi

Emperox Grayland II tries to rally The Interdependency to save the empire from the collapse of the Flow, but the heads of powerful guilds and their allies prepare to overthrow the Emperox.

The Consuming Fire by John Scalzi is a story that reflects a more serious storytelling, writing, and dialogue than readers loved in Old Man’s War. The sense of humor that is beloved in Old Man’s War can still be seen through a few characters, but the story certainly has more depth.

Emperox Grayland II tries to save the Interdependency by warning the people of the Flow collapse and rallying others to prepare for the inevitable disruption of trade and supplies. Meanwhile, other forces attempt to overthrow the Emperox and gain more power for themselves.

The Emperox Grayland II, or Cardenia, is joined by the Marce Claremont, a Flow researcher, from the first book.

While the majority of the story takes place on Hub, Marce travels to another star system opened up by the changing Flow.

The Consuming Fire by John Scalzi tells a great story that leaves readers wanting to see the conclusion to the series. The story is written well, and the political intrigue and maneuvering keep readers engaged throughout despite the relative absence of action scenes that readers of Old Man’s War may have expected.

That’s not to say that there aren’t any action scenes, but the few scenes that do exist are enough to keep readers on edge, wondering if the villains of the story will succeed.

What Scalzi does very well is to write characters who have a real presence on the page. Kiva’s dialogue or lines really make her more relatable and alive, and her fury and righteousness makes her my favorite character by far, perhaps even more so than Cardenia. However, Cardenia’s speech near the conclusion of the book is memorable and satisfying to read.

I’m not too fond of the politics in books, and Scalzi does a good job not diving too much into the politics among between the different powers. There’s just enough information to provide a context for the decisions and actions of the characters, and the story moves forward.

The first part of the story is a little slow as the story attempts to establish a foundation for the later events. For instance, there’s a lull as Claremont attempts to disseminate his research through conferences, but his research later leads to some very interesting discoveries that actually open more possibilities for the direction of the story.

It’s the discovery about the Flow later in the book that I found most fascinating. And it’s also the part that has the least amount of detail, making me more eager for the next, and final, book in the series.

The Consuming Fire by John Scalzi does a fantastic job to establish the plot and more thoroughly portray characters for the conclusion of the series with the next book. There are enough elements introduced to make readers look forward to the conclusion.

Read a review of The Collapsing Empire, Book 1 of The Interdependency by John Scalzi.