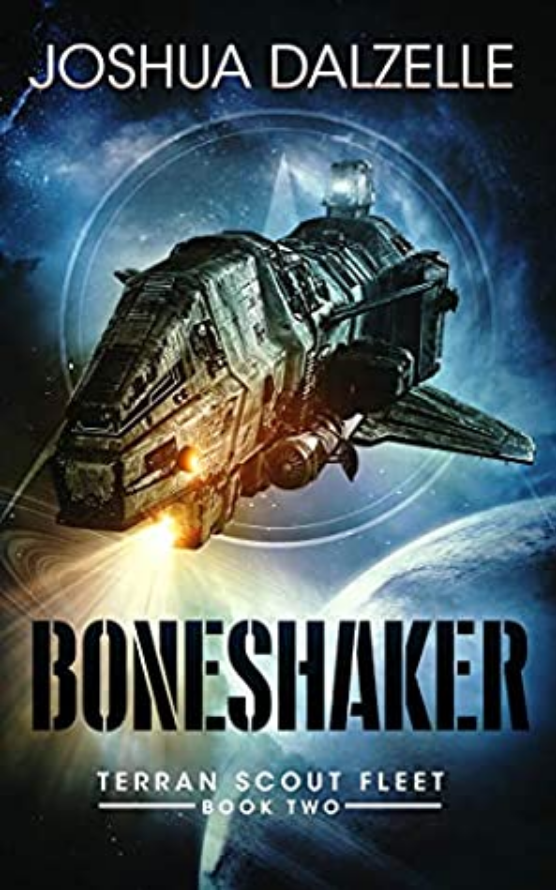 Jacob and his Obsidian team must track down a rogue captain of an Earth cruiser that participated in an attack against the ConFed before the ConFed discovers that Earth was part of the attack. But other parties are interested in the captain as well.

Boneshaker by Joshua Dalzelle continues the series with the inexperienced Jacob at the head of team Obsidian, part of the new Scout teams that operate at frontiers of space. One of my favorite aspects of Dalzelle’s stories is the casual writing style that not only makes the stories easy (and fast) to read, but also contributes to a more lighthearted mood through the interactions of the characters.

Fans of the Omega Force series will definitely miss Jason and his crew of misfits, but the loose tie to Jason through Jacob, along with a few nods to the main series, may satisfy some readers. Instead, this series focuses on the role an emerging Earth plays in a galaxy with constantly shifting power dynamics.

And where Omega Force practically ignores Earth save for the few story arcs, Terran Scout Fleet fulfills those questions readers of the main series have about where Earth fits into the picture. Earth and where it fit into a galaxy of aliens was noticeably absent. I know that I had such questions as I read Omega Force, and I’m happy to say that Boneshaker tries to place Earth into context.

There is one slight conflict that I see with Jacob. He’s described as being a new member of a fairly experienced team. Yet there are moments where he displays more knowledge and understanding of the aliens than his more experienced members, including the intelligence agent. This slight discrepancy can sometimes take away from the consistency of the story.

Other minor issues, like Webb’s incredulity regarding Jacob’s actions, give the book an element of disbelief. It strikes me as odd that a commanding officer would make such a huge misjudgement about a character, given his access to intelligence and personal knowledge of Jason. These small details, along with the team interaction, make it difficult to take some scenes in the book seriously.

The story doesn’t really exceed any expectations that fans of the series may have, and the book doesn’t let readers forget about its connection to the main Omega Force story. The constant reminders felt a bit heavy-handed at times.

In a way, Jacob Brown in Terran Scout Fleet by Joshua Dalzelle is a clone of Jason Burke from Omega Force. If that’s not obvious enough, the characters are related, share similar names, and have the same initials. So it shouldn’t be too big a surprise to readers that the two stories share other parallels: team dynamics, team makeup, and personality.

But these similarities don’t necessarily make for a story repeat. As I’ve mentioned earlier, Terran Scout Fleet focuses on Earth’s position in this ever-changing galaxy of powerful aliens. The exciting conclusion at the end of Boneshaker promises some important appearances and will definitely increase readers’ expectations and desire for the next book in the series.

Read other reviews on books written by Joshua Dalzelle: