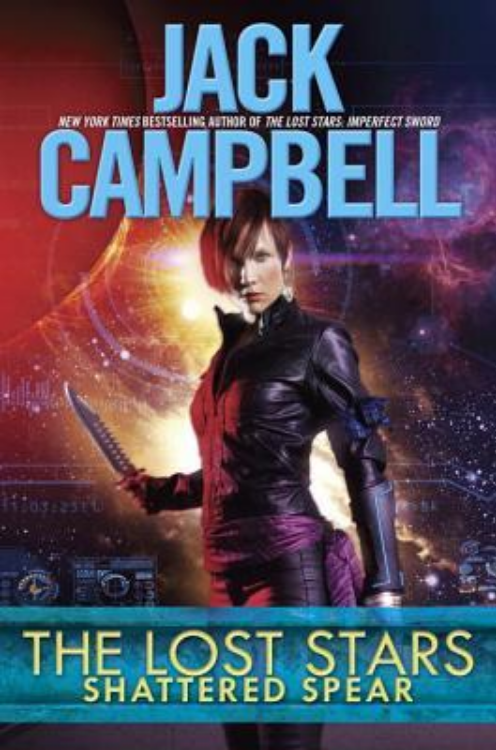 President Iceni and General Drakon work together to establish and strengthen the new government at Midway while defending themselves against a plot by a former advisor. Meanwhile, an enigma warship threatens the new alliance.

Shattered Spear by Jack Campbell continues the exciting and tense conflict between the Syndicate and the new alliance that is being established by President Iceni and General Drakon. For fans of The Lost Fleet series, this story recalls elements and characters that add to the context of the story universe.

One of my favorite aspects of Campbell’s series are the space battles that happen in the books. While The Lost Fleet contained almost non-stop fleet battles in space, Shattered Spear is a lot more limited in terms of warships. But the story makes up for its fewer space battles with more ground battles and a bit more strategic use of available ships.

There’s also the political intrigue and distrust that the author builds up throughout the stories that comes more unraveled here as humans once again learn to trust one another instead of being paranoid and conspiratorial thanks to a corrupt Syndicate government.

One aspect of the book that I felt was a bit slow were the sections of explaining ideas and actions. Iceni spends a lot of time justifying or rationalizing her actions, and I would have preferred more action that illustrates her thinking than explaining. Or rather, I would have wanted more show and less tell.

On top of the conflict between the Syndicate and the non-Syndicate worlds, there’s that additional threat from the enigma and from fellow humans, like former advisors, who have their own goals. This triple threat to the newly found alliance adds a lot of suspense and tension that carries through the entire book. And each threat is well-written and engaging, making each action that Iceni and Drakon take almost like a chess game: sending the limited warships to one system leaves Midway defenseless and open to alien attack.

There’s a feel-good aspect to Shattered Spear that many readers will find endearing. First, Midway and Iceni are underdogs facing giants that are the Syndicate and the unknown aliens. Secondly, the protagonists are attempting to establish a fledgling alliance that represents freedom from oppression, a struggle that relates to the American identity. Finally, within this messy background is a developing romance. These three qualities contribute the story’s appeal.

Shattered Spear by Jack Campbell delivers a satisfying conclusion to the battles that Midway and the new alliance face. There’s not much to dislike about the story, and fans of The Lost Fleet series will definitely enjoy the ending.

Read other reviews on books by Jack Campbell.