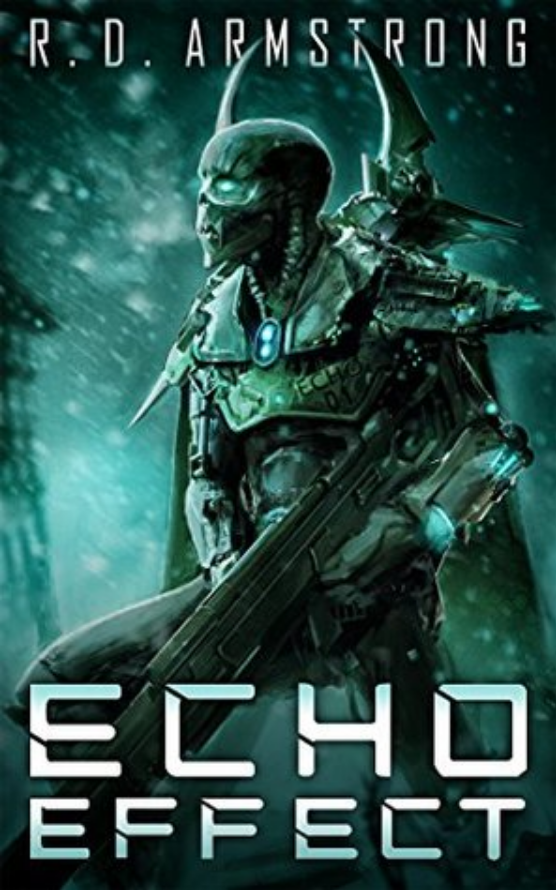 In a world forever changed by Star Rust, U.S. Army Ranger Michael Keller is separated from his wife Vala. Vala does everything within her power to search for her husband, who is caught up in a corporation’s greed for money and power.

Echo Effect by Robert D. Armstrong gives readers an engaging story about alien compounds known as Star Rust and the consequences of such compounds on Earth. At heart is a story of how Star Rust corrupts the people on Earth and how two people learn to deal with this changed world.

Corporations, governments, and opportunistic individuals rush to gather and exploit the Star Rust that spread across the planet from the alien ship explosion. In this conflict-riddled world, U. S. Army Ranger Michael is caught up in a corporation’s greed and separated from his wife, Vala.

Michael Keller is a U.S. Army Ranger who sacrifices himself to save his wife, Vala. Vala, who isn’t aware of Michale’s whereabouts, searches globe for Michael, taking on dangerous tasks.

The story takes place at various places around Earth.

When I think about military science fiction stories, I think about space battles, laser guns, and super destructive ground battles when such battles take place. Echo Effect by Robert D. Armstrong doesn’t quite deliver the kinds of battles one would expect in a military book, but the author does a good job of painting a world that is slowly becoming a nightmare for all but the wealthiest of people.

The book opens up with a lot of promise: the spread of Star Rust across the planet ignites a race toward military and technological supremacy from all the countries on the planet. Whatever Star Rust is, it doesn’t help the people. Instead, Armstrong paints a bleak picture of a world forever changed for the worst with the introduction of Star Rust.

Reading the book, I couldn’t help but draw parallels to our own history when indigenous peoples were forever thrust into the modern age with the arrival of the Europeans. Only in the book, humans are the indigenous people with spears, while Star Rust represents all the evil that the Europeans brought with them across the ocean.

However, readers shouldn’t get their hopes up if they’re looking for historical or background information on Star Rust. That’s likely going to be in future books. Instead, Echo Effect focuses on illustrating how much the world has changed because of the alien element. Governments are distrustful of one another, and a new cold war erupts among the nations. Meanwhile, people suffer and are further exploited by the technological innovations made possible because of Star Rust.

Among all this chaos, the real story takes place: Vala searches for the love of her life, Michael. I wasn’t convinced about the bonds between Vala and Michael—it just didn’t feel as well developed as it could have been, and as a result, the interaction between the two felt hollow at times. Still, there were some touching moments, and their dedication to each other had some moments in the book.

The action scenes in the book are written fairly well, though I think more could have been done to highlight the story behind Star Rust. Readers of tech noir genre will appreciate the sections about augmentations and cybernetics.

I liked Echo Effect by Robert D. Armstrong and the ideas explored in the book. And while I also enjoyed most of the book, there were definitely times when I was wishing for something more science fiction and less grounded in politics and Earth. The short discussion of Star Rust promises more, and I hope that future books will explore that idea.