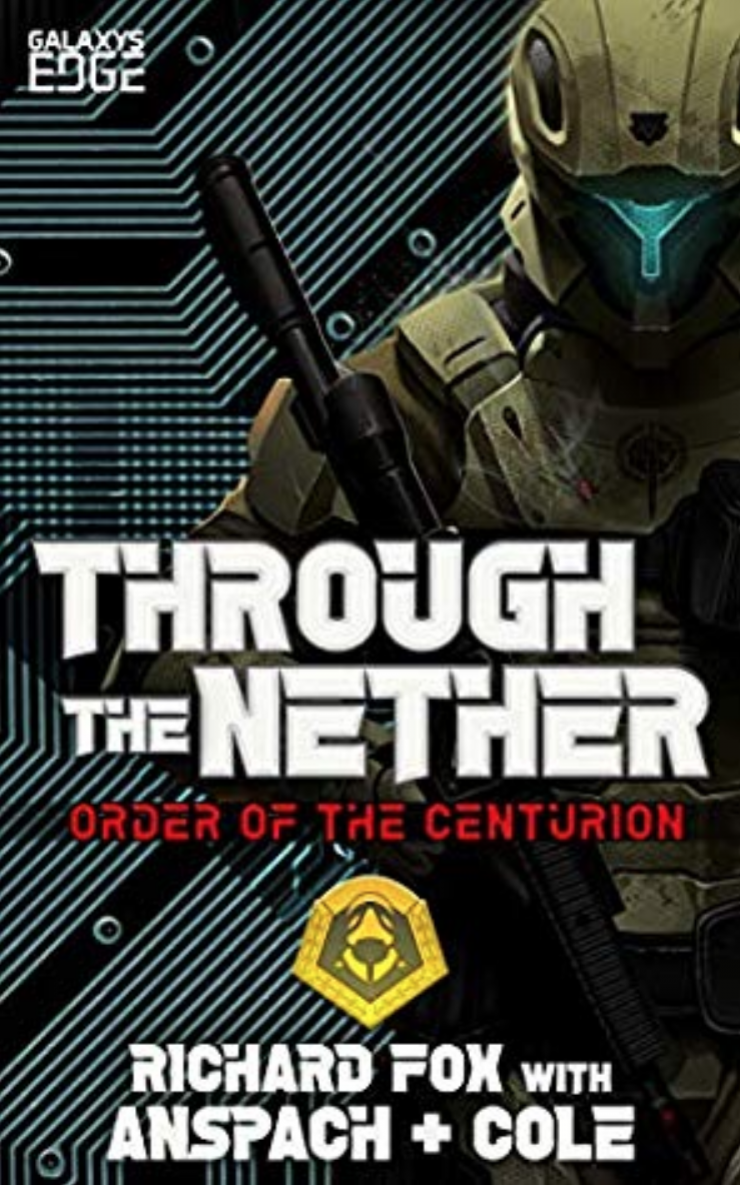 Through the Nether (Order of the Centurion Book 4) by Richard Fox, Jason Anspach, and Nick Cole

Soren Voss, a Nether Ops agent, uncovers a conspiracy to overthrow and disrupt the Republic. Soren must stop the conspirators from succeeding in order to protect the Republic.

Through the Nether does a great job of providing one Nether Ops operation couched in the Galaxy’s Edge storyline. What I enjoyed about this story is that it gives readers a look into how Nether Ops works.

Soren Voss, a Nether Ops agent, investigates the dark underworld of the Republic, encountering characters like the underworld boss Scarpia and corrupt politicians and legionnaires. Soren uncovers a large conspiracy to overthrow the Republic, and he must convince those with power to stop the conspiracy from succeeding.

Soren Voss is a Nether Ops agent whose investigation uncovers a conspiracy to overturn the Republic.

The story takes place in the Galaxy’s Edge universe, within the Republic empire.

Through the Nether Review

There’s a lot to like about Through the Nether. Readers will get a rare glimpse into the shadowy workings of Nether Ops, along with how such an organization is well-deserving of the blurred areas where they operate.

What I particularly like about this story is that it’s couched in the Galaxy’s Edge universe, with a small window into one aspect of the greater, galactic events that take place in the main story line.

Fans of Richard Fox and his writing style will also get to see how he exercises his penchant for writing engaging fight scenes. Fox’s writing style adds another interesting layer to a universe that is fraught with strife.

The one downside while reading was that while the names of the places and characters were clearly Galaxy’s Edge, I couldn’t help but feel at times I was reading an Ember War story. So recognizable is Fox’s writing style with the descriptions of action that I discovered myself lapsing into the Ember War universe on more than one occasion if I my attention wasn’t completely devoted.

As far as the book’s contribution to the larger Galaxy’s Edge universe, I believe the story does a great job in illustrating the rot in the Republic. Readers get a sense of the dealings, double dealings, and spy vs. spy type of shenanigans going on in the background. While soldiers are dying on the front lines and ordinary people suffer on a day-to-day basis, politicians concern themselves more with the harvesting of influence, power, and wealth than with improving the lives of the people they’re supposed to govern.

That corruption shouldn’t be news to fans of Galaxy’s Edge. Indeed, book after book references the rot of the Republic, though that’s usually implied through the appointed legionnaire posts.

As a result of the corruption, the story’s path and Soren’s ultimate decision makes sense. In fact, Soren’s story and the events that lead him to make his choice give readers better insight into why the primary antagonist in Galaxy’s Edge was able to gather such a dedicated and passionate gathering.

I enjoyed Through the Nether by Richard Fox, Jason Anspach, and Nick Cole. It’s not just another mindless, action-packed story separate from the universe. Instead, it enriches the science fiction universe the authors have created, giving readers a more fulfilling reading experience than a standalone book would otherwise provided.

Read reviews of other books in the Galaxy’s Edge universe: