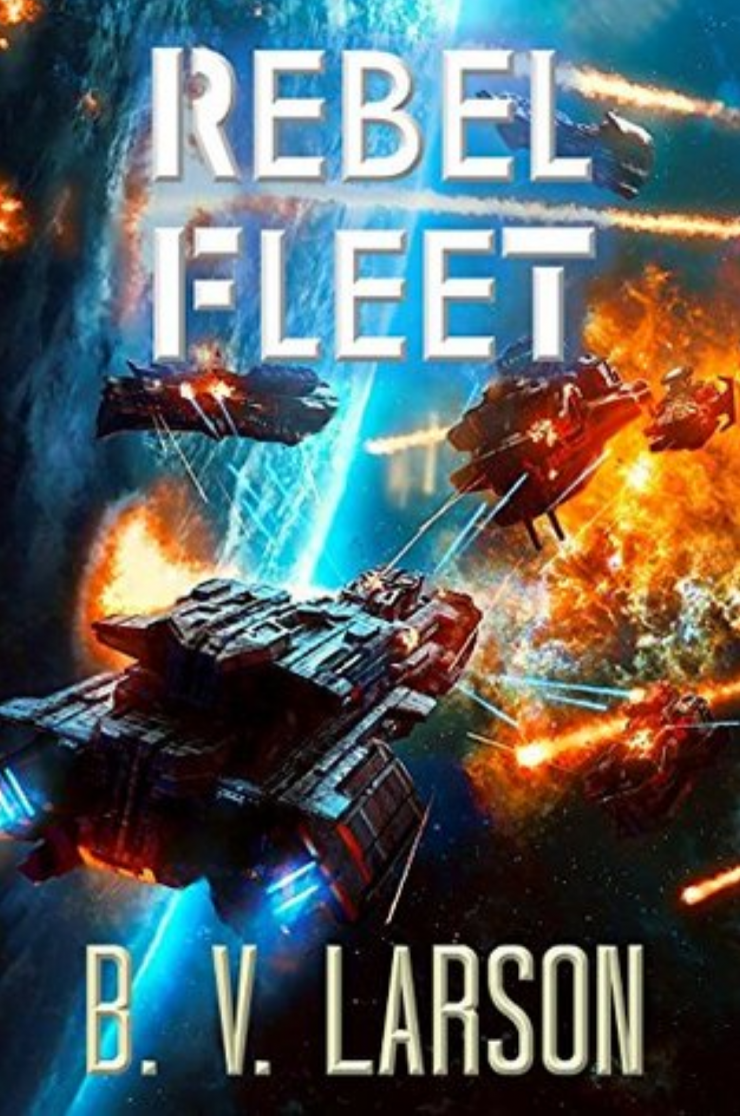 Leo Blake and a small group of humans are violently recruited into an intergalactic war that takes place every thousand years.

I usually read B. V. Larson’s works in between other books when I need something to enjoy and decompress. Larson’s characters tend to fit into specific character types, so you’ll always know what you’re getting into.

Rebel Fleet is no different from his other works in that the writing is enjoyable, and the characters weren’t very surprising. So in that way, the story was familiar, and the plot was decent, especially with the twist in the motivation behind the war.

Every millennium, the Imperial Kher wage war on the rest of the species in the galaxy. And these species band together in order to resist becoming extinct from the war.

This time, Earth is included in the conflict, and Leo Blake and four other humans are volunteered into the Rebel Fleet in order to defend the Earth and other civilizations.

Leo Blake is the main character in this story and a Navy Reservist.

The story takes place on Earth and the surrounding space.

Rebel Fleet opens up with an interesting fight to the death between various humans in order to win the right to represent Earth in the upcoming conflict.

Leo Blake and 4 other humans win this competition, and they’re whisked up into space for a quick training course in order to get ready to fight the Imperial Kher.

The slight twist in the plot that Larson introduces to this book make it stand out from your basic military war science fiction story. What keeps the story interesting is the bits of information that readers learn about the Imperial Kher. What’s missing is the motivation that the Imperials have for waging war.

The rationale for first seeding the aliens and then waging war seems a bit weak, but the reasoning doesn’t really seem to bother the Rebel Kher, every other alien species that is defending itself against the Imperial Kher.

Larson’s use of the womanizing, lustful male stereotype is fairly common across his books. And this character makes his appearance in this story as well. Blake also shares some of these qualities. Outside of some fantasy fulfillment, I’m not sure if the character Mia is absolutely necessary, though she does serve as some kind of ambassador between her species and humans throughout the story.

Some readers may enjoy this particular character (like McGill in Undying Mercenaries), but I found the descriptions of Blake’s encounters with Mia sometimes tiring. Instead, I was looking forward to the space battles and learning more about the Imperials and various Rebel Khers that made up the Rebel Fleet.

My one criticism about the protagonist is that I sometimes couldn’t tell Leo Blake apart from James McGill. Their personalities were so similar that I sometimes felt like I was reading about James McGill’s second job as Leo Blake. This was especially true during the early parts of the book where Blake manages to survive the initial culling and with his encounters with Mia.

The use of various animals on Earth as models for the different Rebel Kher was fun to read about. Having cats, gorillas, and other animals as intelligent aliens adds a fun twist to the story. These aliens have qualities that parallel their counterparts on Earth.

The story wasn’t really surprising in any way. Blake behaves similarly to McGill, and the the humans are able to stumble through obstacles despite their clear disadvantages. The other aliens behave according to their animal counterparts on Earth, and the story leads to a conclusion that shouldn’t surprise readers of Larson’s other works.

That’s not to say that this book isn’t worth a read. Fans of B. V. Larson will delightfully discover more of what they already love. Newcomers to Larson’s works may find some of the male characters a bit flat or one-dimensional, but the plot is fine and the writing is engaging and easy to follow.

If you’re looking for a book that is a bit shallow, but fun to read with an easy-to-follow style of writing, then Rebel Fleet is just the book for you.