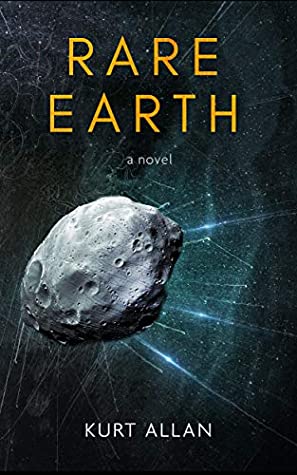 Waldo, a middle-aged asteroid miner, is sent on a mission to discover what happened to a mining ship, and someone does not want him to uncover the answers.

Rare Earth by Kurt Allan is an enjoyable science fiction mystery novel set not too far in the future where humanity has mastered space travel between Earth and the asteroid belt in the pursuit of profit.

But there are also other realistic elements outside of humanity’s financial motivation to exploit space that the author emphasizes. Minor annoyances like oxygen, suit leaks, gravity, and food are often written off by other science fiction writers because they tend to bog the story down.

Allan embraces these challenges, and as a result, Waldo’s struggle to survive against a slew of enemies, both natural and man-made, make for a suspenseful and tense story once the plot picks up. The fear of suffocation is constant for those who go into space, and other threats, like the fear of losing one’s anchor to the ship and floating away helplessly, come in second. Waldo faces these everyday space threats and more from the people who seek to harm him.

Veteran science fiction readers sometimes tire of reading an explanation like a simple shove or jump can doom an astronaut suited up and walking outside of a ship, and in this way, some of the protagonist’s explanations can feel like an interruption to the natural flow of the story.

However, the writing style is casual, even conversational in places. As such, the reading is easy and the pacing is quick.

The thing about mysteries is that the mastermind is often the person people least suspect. That’s certainly true for Rare Earth as it is for any other mystery novel. However, the motivation for the mastermind’s actions feel a bit weak since that character’s background isn’t quite developed until the reveal, almost giving it a feeling of an afterthought.

As a character, Waldo is relatable. His job as a space miner makes sense in that the near-future is a world where humans explore space not out of some idealistic attempt to expand humanity’s understanding of the universe, but rather out of a more pragmatic desire for wealth. It’s this pursuit of profit that leads to the increased efficiencies in space mining, and Waldo’s comments throughout the story can feel like a criticism against this exploitation of people.

The story and its ending leads readers a conclusion about the need for reform in the space mining industry, and on a larger note, the need for a more equitable system wherein everyone can benefit from the riches of space. Maybe there’s a slight social commentary with the mastermind’s motive.

Rare Earth by Kurt Allan is a fun whodunit mystery story set in space that is written in a conversational manner that makes the middle-aged protagonist relatable. A focus on the physics and dangerous realities of space travel give the novel its moments of excitement and tension.