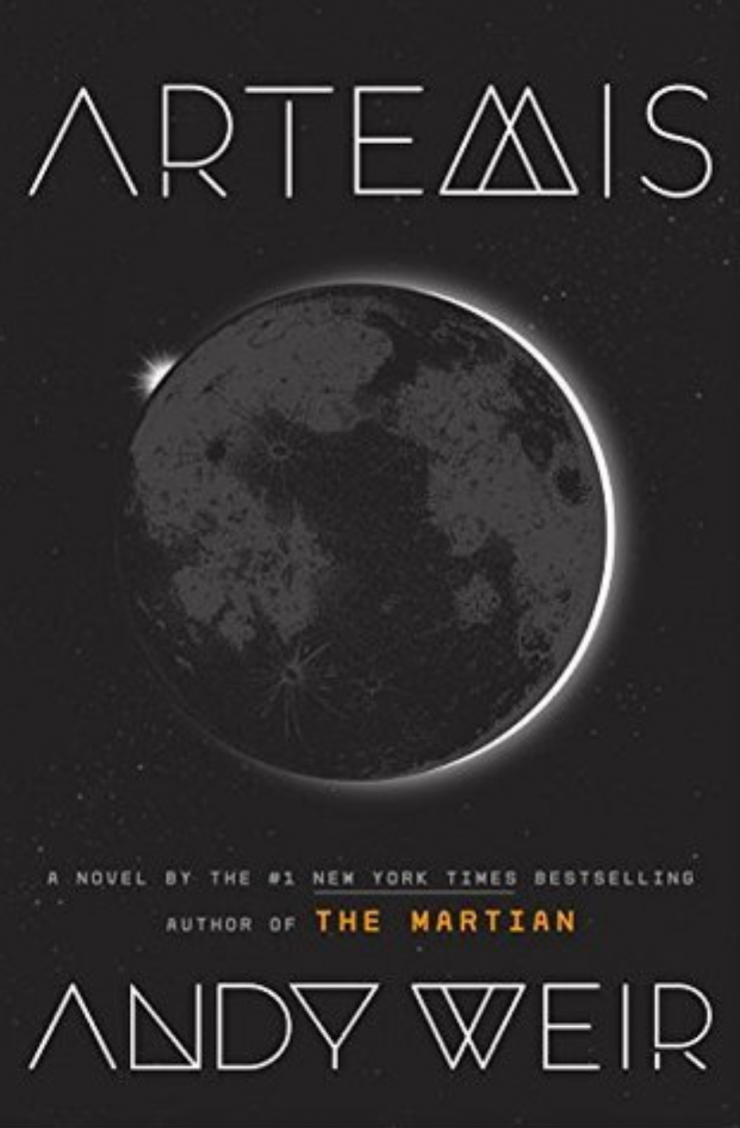 The protagonist, Jazz, smuggles things from Earth to the Moon for people who pay the right price. She takes on a lucrative job and becomes involved in a conspiracy to control Artemis.

The Martian is a fantastic piece of writing, and if you’re expecting that same level of quality, I think you’ll be disappointed. Whereas the sarcasm and humor work well in The Martian, Jazz’s humor and personality just seem immature and whiny.

But despite her personality, the story is still interesting, and the writing style flows well.

Jasmine “Jazz” Bashara becomes entangled in a grand conspiracy to control Artemis after she accepts a lucrative job from a rich businessman. She’s caught on camera while performing the job and is now chased by an assassin.

She has to uncover and expose the details of conspiracy while saving herself from the conspirators using only her wits and her knowledge of Artemis.

Jazz Bashara is the protagonist, a courier and a smuggler who takes on odd jobs. She wants to earn enough money to get her own place.

Martin Svoboda is an electrical engineer who helps Jazz with what she needs for her smuggling operation. Svoboda becomes an important supporting character.

The story takes place in the city of Artemis, located on the moon. The city thrives off rich tourists while citizens struggle day to day.

I have mixed feelings about Artemis because I loved reading The Martian so much. It’s difficult to separate the two stories not only because the writer is the same, but certain aspects of the stories are comparable.

Weir attempts to infuse the same sense of sarcasm and humor into the story through Jazz, but the humor seems to fall flat. Jazz isn’t a teenager, and though I don’t quite remember her age, we learn that she’s in her 20s. But her thoughts vacillate between a 16-year old girl and an objective researcher or engineer.

It may be a gender issue, or it may be a situational problem. In The Martian, the sense of impending doom due to one small mistake is prevalent, making humor a good defensive and coping mechanism.

But Jazz doesn’t face the same extreme consequences. She’s being chased by an assassin, but she doesn’t seek help from authorities. Instead, she takes matter into her own hands, and her humor and sarcasm just don’t reflect her age or the occasion.

And there are scenes that seem a bit out of place. What stands out is the scene with Svoboda and his request of Jazz to test his new condom design. Jazz’s behavior just seems a bit too exaggerated and over-the-top for someone in her 20s. This scene, and others like it, seem unnecessary.

Another similarity to The Martian that you’ll see is the research that Weir has done into the science behind a moon colony. It’s clear that there’s a lot of attention to detail about living on the moon that many writers would just ignore or gloss over.

In both the presentation of humor and the scientific facts, Artemis and The Martian are very similar.

But that doesn’t mean that Artemis is just as engaging. Jazz’s personality makes her really difficult to like. Is she a whiny, sarcastic teenager who blushes at the mention of sex? Or is she an intelligent adult who’s trying to save her beloved city from control by a criminal organization?

Outside of the characters, the plot is well executed and entirely plausible in that any organization would want to control a source of significant revenue and power. The pacing of the story is also good.

Reading along and seeing how Jazz escapes the assassin and gets out of the whole mess was an illuminating experience in that I learned some interesting facts about the moon that I wouldn’t normally have occasion to look up. Many readers may appreciate this fact as well, as it makes the story more realistic.

I think a younger audience would appreciate Artemis more. In many places, the story reads like a young adult novel geared toward teenagers. From that perspective, Artemis would be a great book, except for some of the more sexual references.

Even the conclusion of the story teaches Jazz, and younger audiences, a valuable lesson: there are no shortcuts in life. It’s clear that the entire ordeal has taught her to “grow up” and become more mature.

If you hadn’t told me that the book was written by Andy Weir, I would have thought that the book was a fun science fiction story for teenagers (minus some of the sexual discussion) the same way that Ready Player One is a fun story aimed at a younger audience. So if you can put your bias for The Martian aside, I think you’ll enjoy the story.

If you like stories about the moon, then consider reading the Aristillus series by Travis J. I. Corcoran.