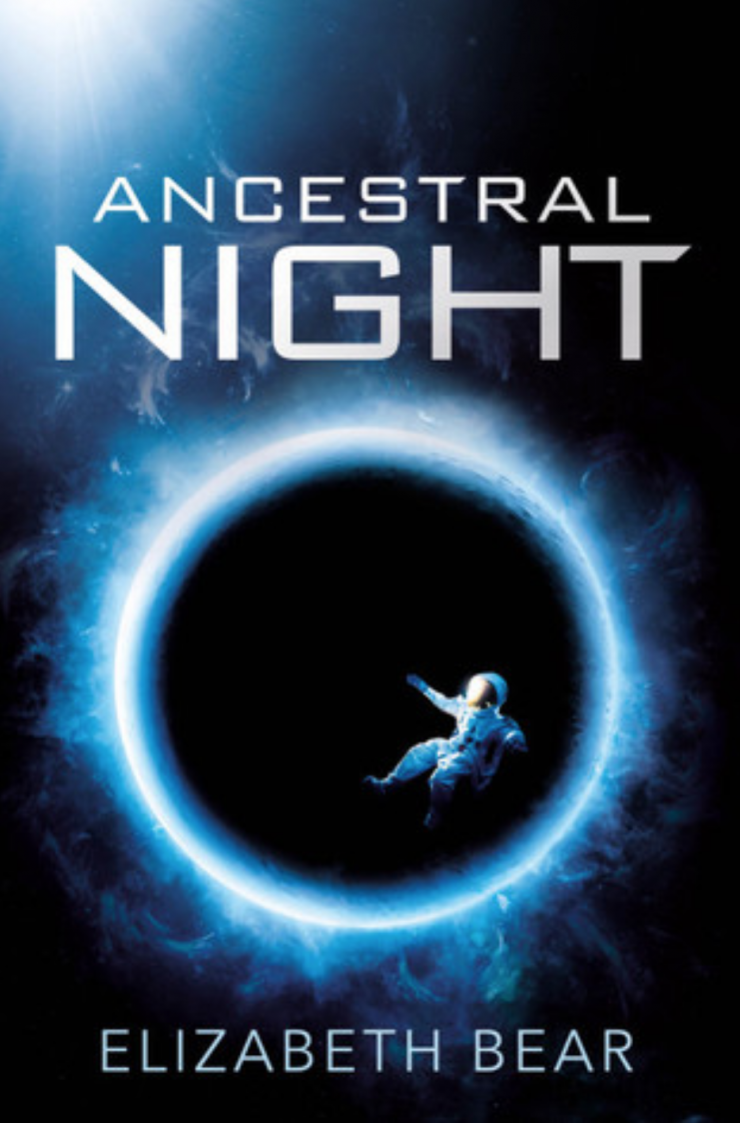 Haimey and her crew of salvagers discover an ancient and powerful alien technology. Haimey must now protect the discovery from groups with malicious intentions.

Ancestral Night by Elizabeth Bear is a fun and light science fiction space opera that incorporates the idea of a precursor race that isn’t often discussed in science fiction. I’m personally a fan of the concept of this idea, so stories that include this element tend to be a favorite.

Haime and her crew discover a powerful technology that is beyond anything in the known galaxy during one of their salvage operations. Haime must now learn the secrets of the technology and protect it from various groups that want it for their own interests.

Haimey is the protagonist of the story. Her crew mate, pilot, and friend is Connla. The artificial intelligence, Singer, controls the ship.

For a space opera, the story takes place onboard ships or space stations across the galaxy.

Ancestral Night by Elizabeth Bear started off a bit slow for me, but as the story progressed, I became more and more engaged. Some books take their time to build up a foundation, especially books that are part of larger series. Ancestral Night is no different, but it’ll reward patience with a story that is engaging and a mystery that is equally intriguing.

Readers who look forward to militaristic science fiction, with lasers, missiles, and other exotic technologies are going to be disappointed. While the presence of battles and action tends to move stories along quickly, the lack of such an element does seem to slow down a story.

Once I accepted that this book wasn’t one filled with battles, my expectations were adjusted, and the story became more and more interesting as readers learned more about Haime and the technology involved.

The character development going on in the story is done better than most science fiction stories. Many times, science fiction writers look toward action, primarily behavior during battles, to build character. But the reality is that people in intense situations, like a battle, will often take spur-of-the-moment actions that don’t necessarily reflect their values. How many times have we said or done things in the moment that we knew were wrong?

Haime is different in that readers get a slower, more substantial character. I’m not sure how I feel about the mind editing that goes on since such a technology can also lead to artificial personalities. But Haime seems genuine enough, and an event happens later in the story that shows the mind editing isn’t as malicious.

The universe in Ancestral Night isn’t one that is black and white. There’s no real clear enemy like there is in other science fiction stories. Instead, the universe is more muddled. There are drugs. Pirates. Cults. Aliens, both good and bad. Amongst all of that is a human species trying to find its place and to try to be a force for good. This theme is mirrored in Haime’s struggle with her past and her own journey of self-discovery.

Ancestral Night by Elizabeth Bear isn’t an edge-of-your-seat story that will keep you turning the pages late into the night, but is one that will make you think about the purpose of life and what possibilities are open to everyone given enough time and effort. And with the premise of the trilogy established, along with Haime’s character development, the second book promises to be more interesting.