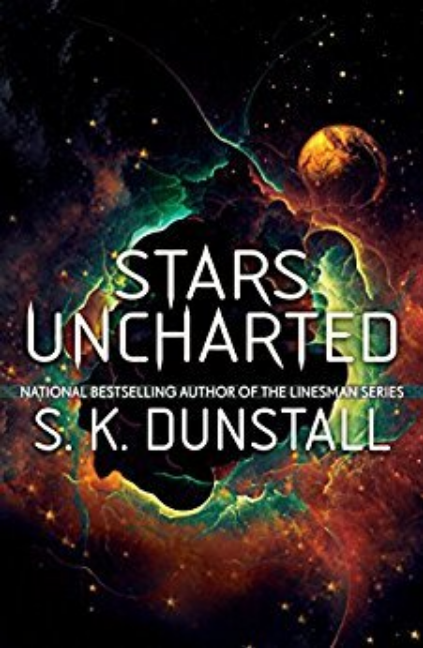 Josune Arriola is a ship engineer and Nika Rik Terri is body-modification specialist who is wanted by a criminal organization for her mind-swapping invention. Their lives come together in search of an elusive treasure map.

Female protagonists are not really common in science fiction stories, and many are generally written by male characters in fairly static representations, but the writers for this story do a great job in showing more complex female characters.

Two different characters and their lives intertwine as one ship captain Hammond Roystan searches for an elusive treasure map that can lead to a wealth of undiscovered worlds.

Josune Arriola is a ship engineer and Nika Rik Terri is a body-modification specialist. Other supporting characters include Captain Roystan and Snow, another body modder.

The story moves from planet to ship and throughout space as characters escape from their past in search for a better future.

Stars Uncharted by S. K. Dunstall is a fun treasure-hunting story involving two female protagonists whose alternating stories eventually intertwine. The impetus for Nika’s story is driven by a relationship gone bad. That’s not something I had expected to see in a science fiction story, but the motivation seems realistic enough.

Perhaps the best part of the story is how both Josune and Nika are more well-rounded female protagonists. In fact, from the protagonists’ perspectives, the male characters seem to be more distractions than heroes. Additionally, the perspectives from the female characters give readers glimpses into what the characters notice: voice, appearance, or behavior are all emphasized more than action.

I wasn’t too interested in Nika’s story at first. The whole body modification aspect seems unnecessary and vain. Luckily, Nika’s twist on the process removes some of the vanity associated with body mods like blue skin or green hair. And Nika is incorporated into the larger story in an interesting manner.

The plot of the story, the search for the treasure map, is reminiscent of the classic Treasure Island. Maybe all stories with treasure maps find their inspiration from Stevenson’s work. If you recall, Stevenson’s work was filled with action, adventure, pirates, and, of course, treasure. The existence of such a treasure map to a wealth of information attracts all types, including criminals who are willing to do what it takes to get what they want.

That makes the search for treasure all the more treacherous for characters, and for readers, all the more exciting. Revelations at the end of the story do a good job to resolve the questions that arise throughout the story. I almost wish there was more combat, but that would probably shift the tone of the story in a different direction.

The conclusion of this first book in the series opens up the story to an adventure that promises to be more exciting, so I imagine the sequel is going include more adventure and action.

Overall, there’s distinct feminine quality about the story that makes Stars Uncharted by S. K. Dunstall a refreshing, fun action-adventure science fiction story. The writing style flows well, and the relationships between characters are dynamic and evolving. Readers who want more character development in science fiction stories will enjoy the protagonists of this story.