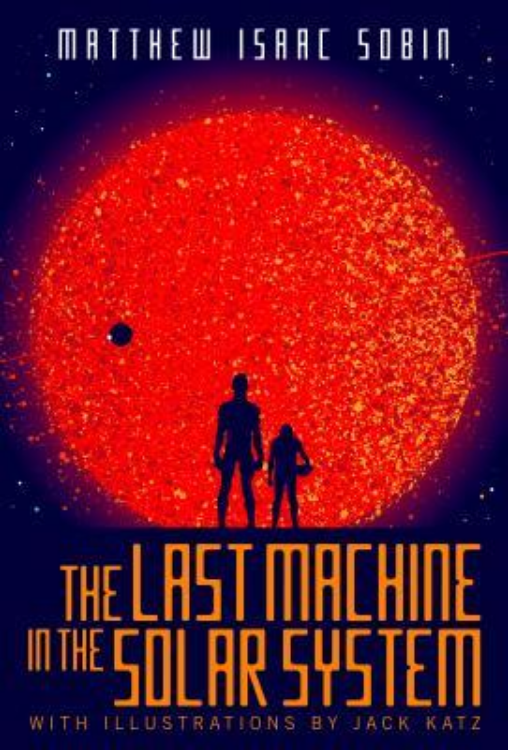 The Last Machine in the Solar System by Matthew Isaac Sobin

Jonathan, an artificial intelligence, observes the last few moments of humanity as the sun swallows up the inner planets.

I really enjoyed The Last Machine in the Solar System by Matthew Isaac Sobin. The topic, the death of the Earth, isn’t largely dealt with in science fiction because this event takes place so far into the future. And many science fiction writers have a more positive view of humanity’s ultimate destiny.

But Sobin doesn’t see humans developing FTL travel or any wondrous technology. Humanity’s squabbles keep people trapped within the solar system, scrambling to save themselves even until the last days of the planet.

The premise of the story is a refreshing take on the fate of humanity, and the story is just long enough to accomplish its storytelling goal.

Jonathan, a machine built by Nikolai, is the last surviving creation of humanity at the end of the sun’s life, billions of years into the future. As Earth and its inhabitants await their doom, Jonathan contemplates humanity and its own place in the universe.

Only two characters are in this story: Jonathan, the machine, and its creator, Nikolai.

The Last Machine in the Solar System Review

There’s a lot to like in The Last Machine in the Solar System by Matthew Isaac Robinson. One aspect of the writing that first struck me was the consistent mood or tone throughout the book.

Jonathan, the machine built by Nikolai, isn’t programmed with emotions or a sense of urgency. As a result, it observes the gradual expansion of the sun and its encompassing of the inner planets with an objective perspective.

Even as the planet and all of its inhabitants are being swallowed up by the red sun, Jonathan remains distanced (both physically and metaphorically). Long after Earth and its people are gone, Jonathan remains, the last testament of a civilization advanced enough to create the machine but not intelligent enough to escape a fate all intelligences must encounter.

Jonathan even accepts its own demise in a time billions of years into the future, when the last light of the stars blink out, leaving a universe of darkness. It’s a bleak picture, and Jonathan’s narration of the events feels almost as a journey entry, with the thousands of years that pass feeling like a week or a month in the perspective of an artificial intelligence.

Readers may find the mood and tone similar to that of Kim Stanley Robinson’s artificial intelligence in Aurora. Fans of that story will likely enjoy this one as well.

The bits of insight readers are given into the human struggle to survive are fascinating. Jonathan’s perspective as a machine gives readers a detached perspective into humanity’s last attempts to survive the death of the sun.

Jonathan’s presence is a reminder to any intelligent species that has managed to escape the confines of its solar system. I only hope that one day, some intelligent species is able to discover Jonathan and the last legacy of humanity so that their lives can live on in the imagination of others.

2017 Matthew Isaac Sobin The Last Machine in the Solar System