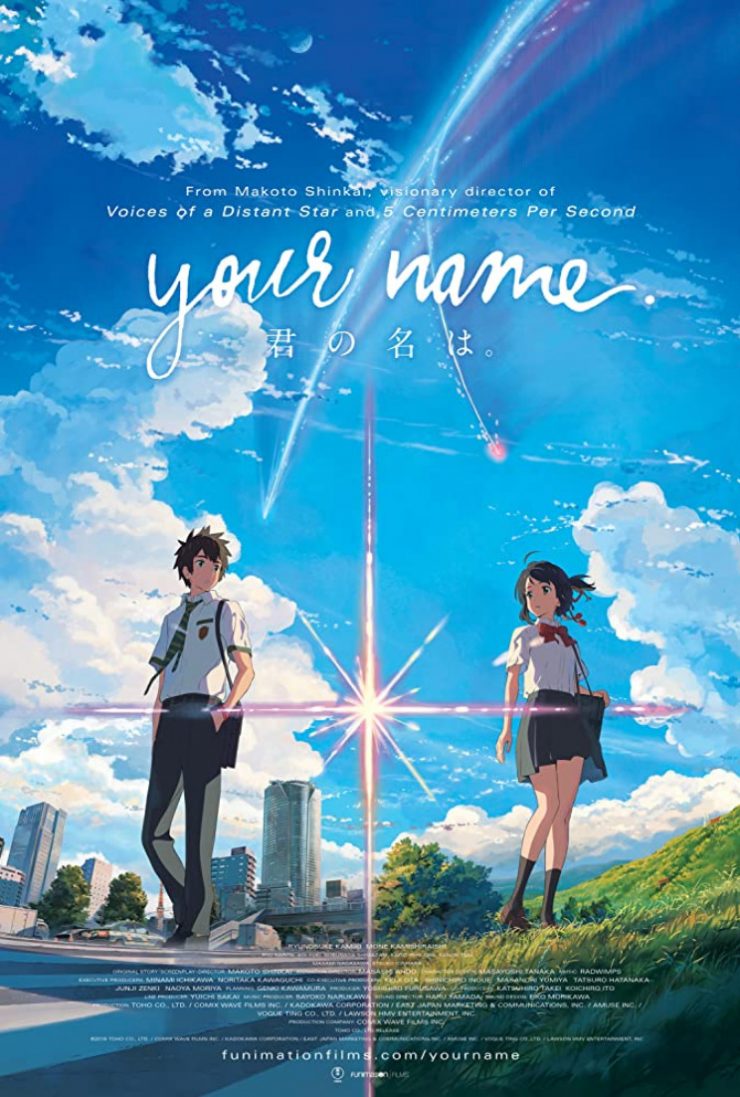 Taki and Mitsuha, two high school teenagers from different parts of Japan change bodies. They learn about each other and their lives become inexorably intertwined.

I’ve been putting off watching Kimi no Na wa (2016) for some time. Every time I’d start the movie with the intent to complete it in one sitting, I’d find myself stopping after the scene where Mitsuha is dancing in the shrine and making sake with the chewed rice. Something about that scene just didn’t sit right with me, and I wasn’t sure where the writers were going with it.

Luckily, this particular aspect of the movie, much like other plot devices and elements are all woven together for a story that is well-told and perhaps a little emotional. That’s one of the better aspects of this movie: the writers made sure that loose ends, much like the tear in Miki Okudera’s work uniform, are woven together in a manner that makes the final product that much more impactful.

The actual pacing of the movie is a bit slow since it’s a slice of life movie. The characters take awhile to grow on you since they’re high school students. And teenagers can be rude. This is reinforced through snide comments that Mitsuha’s classmates make about her being a shrine maiden and daughter of the mayor.

Parents don’t really play a big role in many Japanese animated series. Even in Western young adult literature, parents are largely absent since their presence, combined with good parenting, wouldn’t necessarily allow protagonists to explore, make mistakes, and learn. I suppose Japanese storytelling and American storytelling are similar in this way.

I imagine this ostracism is supposed to make audiences more enamored with Mitsuha, and it works. She’s a high school senior with big dreams of Tokyo, but she’s born into a family of shrine guardians who keep the traditional practices in a small town far away from modern civilization.

How many of us often feel like we’re destined for more until the burdens of life crush those hopes and dreams? That’s what makes all of us root for her even more, and that the movie has done so well in many other countries suggests some kind of consolation: many of us all around the world aspire to lives that are wonderful only to fall into some less-than-hoped for life, often times as a result of forces outside our control. In Mitsuha’s case, an anomaly or fate or some force grants her a second chance to realize those dreams.

It’s difficult to find fault in any of the characters. Unlike a lot of Japanese animation, which uses heavily established character stereotypes, Kimi no Na wa instead opts for more genuine protagonists. Sure, Taki fondles Mitsuha’s breasts when he’s in her body. But what teenage male who finds himself in the same situation wouldn’t? And to be fair, the movie suggests that some fondling may have gone on when Mitsuha was in Taki’s body. Luckily, this aspect of the movie is later used by writers so that it’s not just a perverted plot element meant to gain favor with male audiences.

One thing Japanese writers do well is to take various mythologies and ideas from around the world and integrate them into Japanese storytelling. Anyone who has played Japanese role-playing games like the Final Fantasy series can attest to this. But it’s not just games. Anime series also weave worldwide mythologies into their stories, so I imagine Kimi no Na wa is the same.

The idea of reincarnation isn’t new to Asian cultures. Mitsuha, early in the movie, makes a wish about being reincarnated into a boy who lives in Tokyo. This wish upon a star, obviously, is granted but with a twist. But it’s not reincarnation that makes the movie interesting. It’s the unique use of body switching and travel that I found intriguing.

It’s also this aspect of the movie that is most confusing since the device relies on several factors: the sake that was fermented from Mitsuha’s saliva, the threaded hair ribbon that the grandma claims can be infused with emotion, and perhaps some connection to the Miyamizu family that has has a history of what grandma calls lucid dreams. All of this is supposed to be spiritual and magical in some way that allows the second chance.

The conclusion of the movie isn’t as satisfying as I would have hoped, but it’s not terrible. There’s a jump in time for the characters and they’re older, and presumably, done with college. Those hopeful, dreaming teenagers we’ve come to relate to and love are now grown up. They’re adults, and in some ways, the magic of the movie loses a bit of its appeal. But it’s not a bad ending. It’s good enough.

In many ways, Kimi no Na wa has numerous similarities to another favorite of mine, The Girl Who Leapt Through Time (2006). Both stories feature time and fate as key elements, and the protagonists are in high school. Even the story arc is familiar. If there’s a formula somewhere that Japanese writers are using to crank out these movies, they need to speed up the releases.

Every now and then, a movie comes along that makes you sit back and consider its themes and messages. Kimi no Na wa is one of them, and the movie asks us to consider our lives and how we could change it for the better starting now. Some of us may have forgotten what our hopes and dreams were, but I’m sure the feelings behind them are still there, waiting to be recognized again.

Read reviews of another similar fantastic anime movie The Girl Who Leapt Through Time (2006).