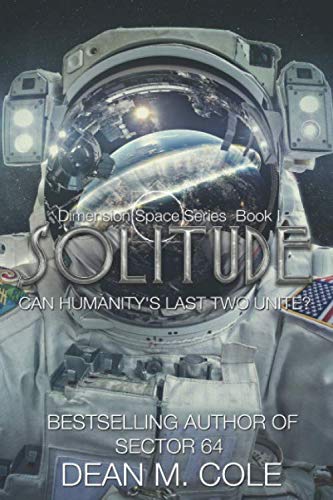 Pilot Vaughn Singleton must rescue Commander Angela Brown onboard the ISS and work with her to figure out what caused humanity to disappear.

Solitude by Dean M. Cole is the start of a series of books that follows two people, a physicist astronaut and an army helicopter captain, who are inexplicably left behind during some kind of world-ending event brought on by a wave of light.

The premise of the story is perhaps the most unrealistic or fictional aspect of the book—the origin of this wave of light plays on the fears that people today have about CERN. This nod to the media-driven fear in our own world gives the story a more realistic fear of the unknown.

There may be some similarities to The Martian in the astronaut Angela Brown’s predicament aboard the International Space Station, but those similarities are few—Brown’s situation feels a lot less severe than Watney’s primarily because she has adequate supplies and she’s in orbit around the planet.

The kinds of obstacles Brown faces do add to the sense of danger, and the psychological aspect of being the last human alive does manifest in predictable ways with Brown’s choice of companions and method of keeping sane.

What is a little different from other stories is that Cole does mention the more mundane and oft-neglected aspects of space travel: hygiene, or the lack thereof. Brown’s encounter with the only other human survivor, Vaughn Singleton, leads to a short, but humorous, description.

Because the story is more realistic, it does take some time to get to the point. Both main characters are introduced as being fallible people. Singleton is portrayed as perhaps not the most physically fit of aviators. And Brown appears to suffer from a feeling of imposter syndrome even if her actions in the story show otherwise. That the characters are self-conscious, prone to emotional instability, and don’t always succeed the first time make them a bit more relatable.

Like the characters, readers are left in the dark when it comes to how and why humanity disappeared. Some tantalizing clues are provided at the conclusion of the story with an event that takes place in the harbor. And while Brown appears to have a theory, that theory isn’t shared with readers or with Singleton, leaving readers pretty much guessing what happened. The conclusion of the story includes a short scene that should pique curiosity.

The promise of an answer to the mystery of the wave of light, the question of humanity returning in some way, and the condition of the world with the sudden disappearance of people are enough to engage readers in this apocalyptic science fiction series.

Solitude by Dean M. Cole is a great book for readers who want more of the science and less of the fiction. The story’s premise may be fictional, but the main characters are just your everyday, normal people, making the dangers of the story that much more palpable for readers.\