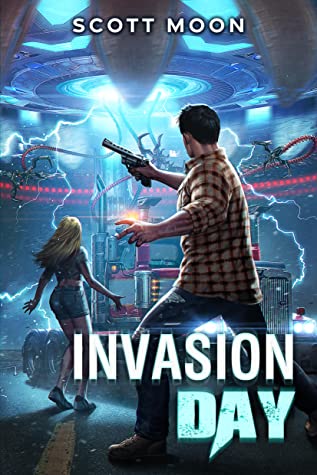 David Osage is a truck driver who finds himself at the center of attention when aliens invade and occupy Earth.

Invasion Day by Scott Moon isn’t quite your run-of-the-mill alien invasion story where aliens are focused on invading and enslaving humanity. On the contrary, the arrival of the aliens leads to some interesting conflicting forces, leaving the surviving humans (and readers) to try to figure out what exactly is going on.

What the story shares with other alien invasion stories—overwhelmingly advanced technology, terrifying aliens, and a sense of dread—is supplemented by a mystery into the motivations and goals of the aliens. As the story unravels, the aliens’ goal only leads to more questions about who they are, what they want, and where they’re going.

The story centers around the three Osage siblings, with the main character being David Osage, who is on parole and working as a truck driver. His two siblings are a game designer in Seattle and a police officer in Chicago. David picks up a hitchhiker, Dust, whose origins and background remain vague and mysterious for a good part of the story. But when she reveals her past, the result is only more questions about aliens and earth.

What makes the siblings interesting to the aliens isn’t necessarily their fairly mundane careers, but their genetics, which allows them to survive the virus that the aliens apparently have within them.

The virus itself allows these aliens to traverse the vastness of space, and much is unknown about whether the virus is native to the aliens or if the aliens were at some point infected by the virus. Questions about the aliens pervade the story, and even the aliens themselves offer few, if any, answers, making the whole story a bit mysterious.

Another aspect of the story that sets it apart from other alien invasion stories is the absence of the military. In fact, it’s even possible, if the aliens are to be believed, that the invasion may have been known about. What little presence the world military has in the book isn’t very inspiring for the survivors, making David and Dust the two people on whose shoulders the survival of humanity rests.

While the story does take a little bit of time and effort to gain momentum, the pacing stays fairly quick thanks to some suspenseful and thrilling encounters with both the rabid aliens and the more intelligent and occupying aliens.

Invasion Day by Scott Moon offers a slightly different twist on other alien invasion stories by focusing on an unlikely hero who stumbles upon the key to humanity’s survival in a world occupied by aliens. But maybe the best person to save the world is someone who is able to show compassion for a stranger rather than some superhero soldier.