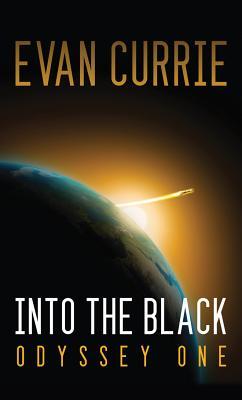 Captain Eric Weston, and his crew aboard the spaceship Odyssey, explore a region of space beyond the solar system and make some discoveries that not only threaten Earth, but also add to the mystery of its origins.

Into the Black Review

Into the Black by Evan Currie tells an exciting story about Earth’s first foray beyond the solar system after a devastating war, and what they discover beyond is not only surprising, but also terrifying.

With a series name like Odyssey One, it’s not surprising that this space opera takes readers on an adventure fraught with dangers and new discoveries, among which is a discovery that threatens the extinction of a young spacefaring Earth.

The story itself begins after the end of a world war that pitted the western countries against the eastern ones, with a slim victory for the North American Confederation. The opening sets the mood for the story: the uneasy peace after the war is maintained by the superior firepower and technology found in the spaceship Odyssey.

But the tension between the two former enemies on Earth is soon eclipsed by what Weston discovers when he travels beyond the solar system. A chance detection of a tachyon distress call light years away prompts the Odyssey to explore the source, and what results is an exciting and terrifying discovery that begs the question of the mystery of the origins of humanity.

One glaring absence is the story’s almost casual disregard for the reason behind the similarities between Earth and the group discovered. While this mystery of the origins of humans on Earth isn’t quite answered in Into the Black, the conflict that arises from Weston’s discovery adds to the suspense and exciting action of the story. Weston’s background as a former commander of the esteemed Archangels contributes to the more realistic space combat seen in this book. This background later proves to be critical in later engagements.

Instead of instantaneous hits, Currie’s discussion of the weapons used in the story—from all parties—gives the story a more realistic feel. And as the technologies are expanded by alliances, the story is sure to have a feeling of progression and advancement—a kind of evolution in ship and weapon design that is sure to make the battle strategies and story exciting.

What is interesting is the lopsided advancement with one party in the story—despite their technological advancements, they are severely lacking in weaponry. This weakness is exploited by the antagonists and allows Weston and his crew a niche to exploit. While this weakness in weapons advancement seems implausible, the story does perhaps allude to some possible reasons.

Into the Black by Evan Currie is an excellent introduction to the Odyssey One series, and the conclusion is sure to leave readers eager to learn more about the fates of everyone involved.

Read reviews of other exciting space operas below.

2012 Book 1 Evan Currie Into the Black Odyssey One