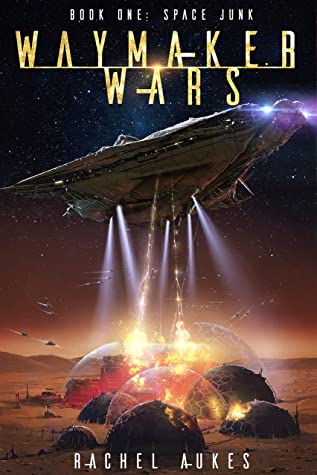 Captain Hale and the survivors of the colony mission try to live as salvagers after their mission is sabotaged by some unknown entity.

Space Junk by Rachel Aukes is the first book in the Waymaker Wars series that is just as engaging and interesting as her other series, In fact, fans of the other series will find many similarities in this one: a fun and diverse cast of characters, an engaging writing style, and an interesting plot that is sure to entertain.

The story opens with a scene that promises to be devastating: a battleship in orbit around the moon is just about to bombard and destroy a lunar colony when it is stopped by a mysterious vessel that later refers to itself as the Waymaker, an artificial intelligence. Its name brings up ideas of guides and trailblazers, and that’s just what they do: guide humanity into a new era of peace.

But that peace comes at the cost of complete disarmament for space-faring vessels.

The beginning of the story certainly implies a very different story from the story that ensues: a group of survivors from a failed colony mission return to the solar system and take on odd salvaging jobs in order to stay under the radar.

That transition between the first part of the book where humans are preparing for their first extrasolar colony and the second part of the book, where the survivors are stuck in a rut, is a bit abrupt. The different directions that the story could have taken—some insidious attempt by the Waymakers to dominate humanity or a story about Earth’s first colony around another star—are instead replaced by a fairly mundane story about how the Human 2.0s are trying to live their long lives.

That’s not to say that the story is uninteresting. Quite the contrary—that the story takes a very different turn from the start is a nice surprise, and the ensuing plot, as well as the writing, are both interesting enough to keep readers engaged. One weaker aspect of the story that seems almost thrown in is Hale’s solution to conflict, and for a science fiction story, this solution seems almost an afterthought rather than something that is carefully conceived.

Some answers are provided about the Waymakers toward the end of this first book that lead only to more questions like what their true purpose is. It’s not difficult to imagine that the plots of the books in this series will eventually converge with a war with these Waymakers given the name of the series.

The main character, Captain Jack Hale, and his crew are interesting and fairly relatable characters despite their seemingly casual disregard for the lesser humans, or 1.0s. Their retreat from the larger society makes sense given what took place aboard the colony ship, and it’s the introduction of a child that forces them to deal with their past history and prejudices.

Space Junk by Rachel Aukes is a fun and engaging science fiction story that has a few unique ideas incorporated into the plot that will keep readers engaged. The Waymakers seem benevolent and invested in saving humans, but at the end of the story, readers confronted with the question of whether or not humans can survive on their own.

Read reviews of other exciting science fiction stories below.