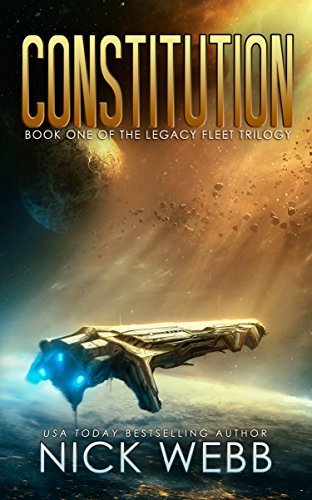 Captain Granger is the captain of one of the last of the legacy battleships that is about to be turned into a museum piece, the ISS Constitution, when aliens known as the Swarm once again attack Earth, giving the Constitution one last mission.

Constitution by Nick Webb is a fun and engaging military science fiction story that finds one troublemaking Captain Granger, described as cantankerous, near the end of his military career as he brings his legacy battleship, the ISS Constitution, into its final resting place at Lunar Base as a museum piece.

But when the Swarm, a hostile alien species that warred against Earth seventy-five years ago, returns to continue the war against humanity, the now ancient battleship finds itself in the middle of a battle to defend Earth against the Swarm.

The plot of Constitution isn’t very innovative—other antagonists in the book are the Russians, an tried-and-true enemy for science fiction writers for decades—but the tropes, however common they are in science fiction, are executed well and the story is enjoyable.

One aspect that stands out is the author’s treatment of battles. While not much is said about the capabilities of the other ships in the defense of Earth except for their smart-steel armor, the Constitution’s birth in a bygone era means that its weapons aren’t fancy and its armor is thick. The result for readers are more engaging battles with kinetic weapons that add to that suspense because of their slower speeds.

David and Goliath stories are enjoyable precisely because readers always root for the underdog. In this story, Granger is a washed-up captain disliked by his peers and higher ups because of an attack he instigated against the Russians years prior. On top of being disliked, he’s suffering from a terminal cancer, and he’s in charge of a battleship that is considered a museum piece rather than a warship.

These factors all reinforce that idea of the underdog for our protagonist, and when facing an enemy with a superior technology and force, all of these factors work against Captain Granger, putting him at a severe disadvantage against his enemy and making readers root all the more for his victory.

The few mysteries sprinkled throughout the story add to the plot engagement. What little is revealed about the Russian’s role in the story, as well as the vice president’s role, only serves to pique interest. What do the Russians know? And when will that knowledge be revealed to readers? What will the Russians do next? These questions, and others, help maintain the mystery and suspense throughout the book.

Constitution by Nick Webb is a fun action-packed story that pits a fractured humanity against an intimidating foe armed with superior technology. Readers who love alien invasion stories and stories where characters triumph against long odds will find a good story here.