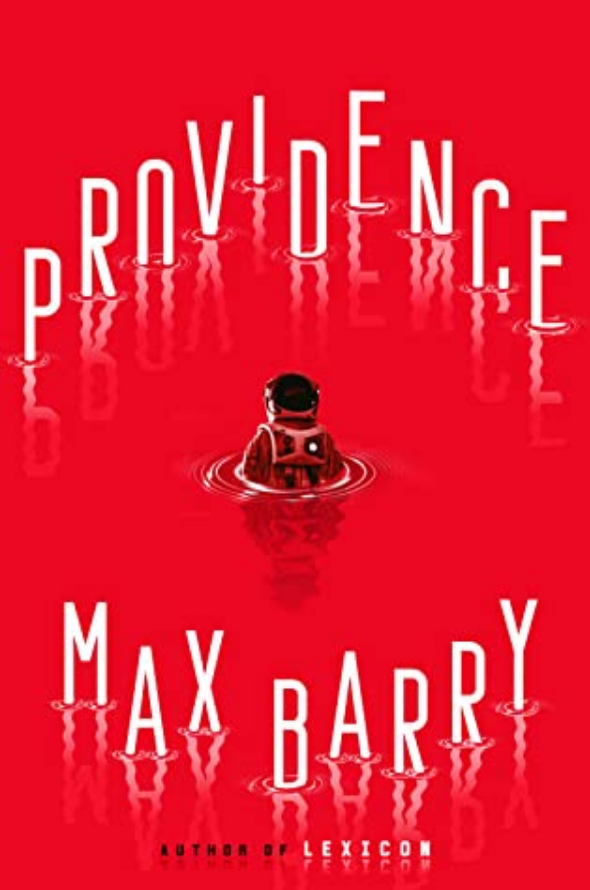 Four people are sent on a mission aboard an automated battleship to destroy an alien species. The crew members serve only to publicize the war effort since the battleship is almost completely automated. When communications with Earth are severed, they must take action.

On the surface, Providence by Max Barry may seem like a story about an intergalactic war between humans and space salamanders. But the story soon focuses on the mental and physical impact on the crew as they discover that they are quite useless on a ship that is fully capable of fulfilling its mission to destroy the salamanders.

A crew of four people are sent on a mission aboard a battleship to wage war against space salamanders. But their purpose isn’t to man the ship. Instead, the crew serve as propaganda tools for people back home. When communications are severed, the crew must make their own decisions.

Anders, Gilly, Jolene, and Talia are the sole crew of a Providence-class battleship.

The story takes place aboard the battleship in the VZ, or Violet Zone, as it battles the salamanders in space.

Providence by Max Barry starts off a bit on the slow side and takes awhile to get to a point where the story becomes interesting. In some ways, the way battles are waged is reminiscent of Ender’s Game, except with a small crew of humans.

It’s that crew of four people on the automated battleship that the story revolves around. And for a good portion of the book, the story is about how these crew members cope with being sent on a years-long mission deep into enemy territory.

Outside of the automated battles that weren’t really exciting save for one or two, I admit that I had little interest in the characters. They didn’t feel that relatable despite some of the anecdotes. I think it’s a combination of how detached the battles along with a sense of boredom among the crew. Perhaps some of that translated over to me.

Discussion about the artificial intelligence did pique my interest, and it kept me guessing throughout the book, though I felt at times this aspect of the story was an afterthought, considering its treatment.

I continued reading because the mystery of the salamanders is interesting, and the conclusion of the story is decent. In fact, the last third of the novel becomes a lot more engaging than previous sections. If the two-thirds of the book were accelerated a bit, I think the pacing would be better. Perhaps a discussion of previous missions with other ships—I found myself wanting more of this whenever other missions were discussed.

Some aspects of the story do ask us to question the rationale of the battleship designers. For instance, why include a crew at all along with the ship? And why not include equipment or defensive weapons for them? If readers are led to believe that these ships come at an extreme expense to humanity, then it seems shortsighted to not consider weapons for the crew.

Nevertheless, the story’s exploration of the salamanders is interesting enough, and the last section of the story reveals other facts about the salamanders that are quite novel. Max Barry’s Providence is an interesting read once if you’re curious about how an almost automated war against another species could be fought. The aliens in the story are presented in a manner that is different from other science fiction stories, and for me, that alone was worth the read.