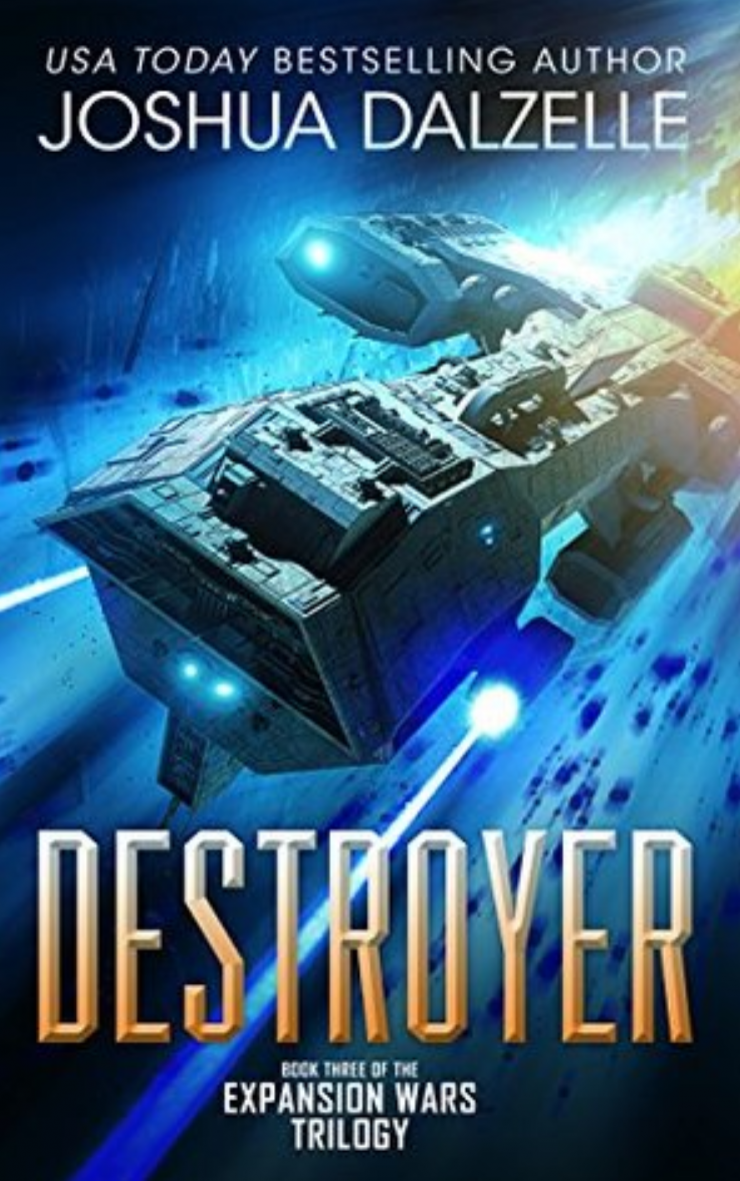 Captain Jackson Wolfe in command of the latest destroyer Nemesis hunts the Darshik ace known as the Specter.

If you’ve enjoyed the previous two books in the Expansion Wars trilogy, then you’ll definitely enjoy this book. It has a bit more suspense regarding the Specter, though we don’t get to see Captain Wright commanding anymore.

Captain Jackson Wolfe commands the latest destroyer named Nemesis, and he has to hunt down and destroy the Darshik ace codenamed Specter.

Captain Jackson Wolfe returns in what is perhaps his last command of the frontline destroyer Nemesis.

Characters from previous two stories in the trilogy make a return. Celesta Wright is now an Admiral, and Agent Pike plays a more prominent role behind the scenes.

Captain Barrett, now in command of the Aludra Star, plays a supporting role.

Not only does the book take Captain Wolfe across various systems in the Federation, but he’ll find himself in Darshik territory, as well as in a familiar system.

The main action of the book revolves around the cat and mouse game between Captain Wolfe and the Darshik ace Specter.

What you’ll find refreshingly absent is the focus on the political maneuvering that was present in the previous books. While the politics was crucial to setting up the background information for the series, it did get bogged down in certain places.

In Destroyer, we learn some more details about the Ushin and Darshiks, though these details are loaded toward the conclusion of the story rather than spread throughout. In fact, many “loose ends” are resolved at the end of the book, giving the ending a “rushed” feeling.

What Dalzelle manages to do well across his stories is to add a sense of continuity at the end of his books. This leaves open the potential to create a new series of books for readers to enjoy. I’m sure that many of his fans welcome the continuation of his story universes, though it’s sometimes hard to let go of certain characters (Lucky, from Omega Force, for instance).

One fun aspect of the story was seeing the evolution of the Specter as it tears across Federation space. The vessel becomes increasingly dangerous just like the Federation ships improve from the Icarus to the Nemesis.

Some of the more noticeable changes for the Specter include the use of missiles instead of just the plasma lance weapon. These upgrades, as well as the sacrifice the Darshik captain makes, gives the Specter a large advantage over Wolfe and his crew.

It was also good to see Captain Barrett in the story. He seemed a nice enough character in the previous book, and his presence in this story gives Wolfe an advantage. However, as a character, Barrett isn’t as well developed. Perhaps in the Black Fleet trilogy, he plays a more active role.

What’s a little unknown is how the Specter is able to resupply. The end of the novel gives us some hints as to the logistical support for the Specter, but even that seems a bit unlikely considering what the Specter does to his planet.

We also learn of the Specter’s motivation for attacking the Nemesis. I’m not exactly sure why the Specter didn’t go straight for the prize in the previous books, but that may be due to what they learn from the raids.

We also learn more about the mysterious cube and its relationship to the Vruahn. The cube is perhaps the most powerful device that humanity owns. In the short time that wakes up, the Federation is able to drastically advance its ship designs. It’s even possible that without the cube’s help, Captain Wolfe wouldn’t be able to contend with the Specter.

I felt some ambivalence about how Captain Wolfe treats the cube. In previous books, we see his behavior toward the cube as clinical. But his thoughts reveal that he feels some kind of regret about how he treats the cube. There’s some empathy toward the artificial intelligence, but Wolfe doesn’t express it. These unstated feelings seem a shame considering the outcome.

The plot element regarding the Darshik alliance seems a bit too left field for me. We hear only of snippets throughout the previous two books. Maybe this story is introduced now so that it can be developed in later books. I hope that’s the case. Otherwise, the story arc is incomplete.

The ending of the novel leaves us with a positive note and some hope for humanity. If Wolfe’s visitor is correct, then humanity has a small chance of joining the group of ancient, but powerful, alien alliance.