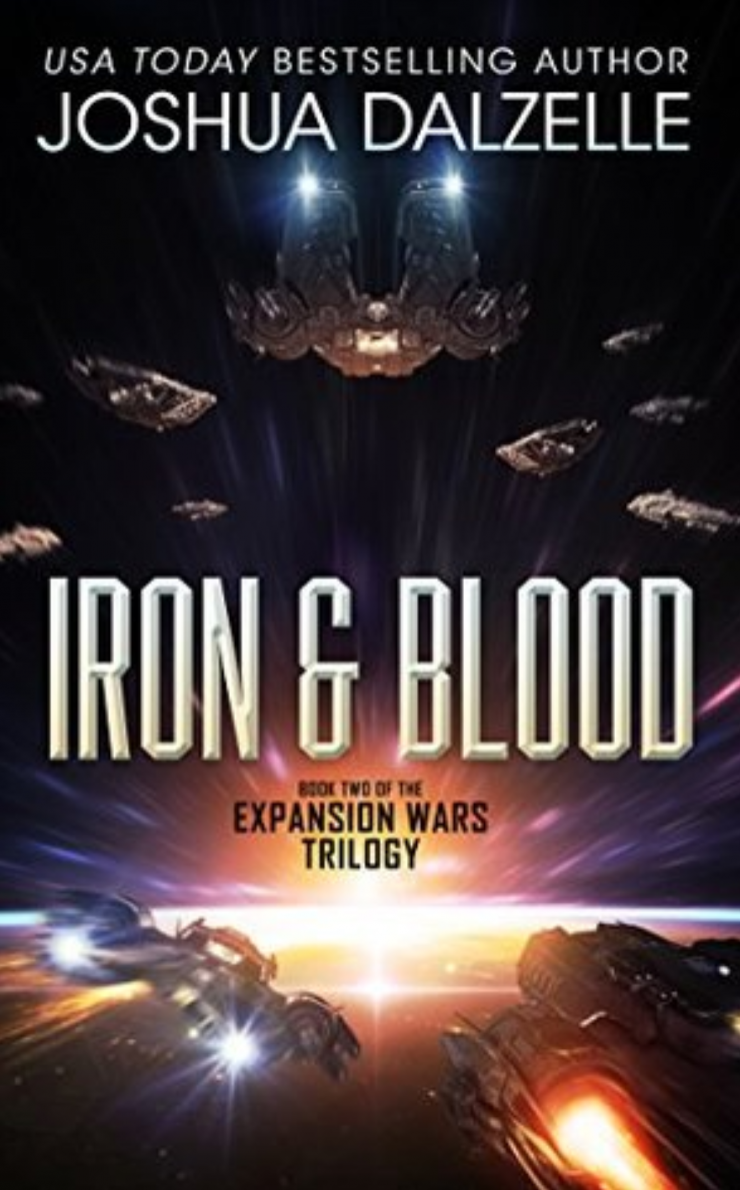 Iron & Blood brings you more of what you love from the first book fo the Expansion Wars trilogy.

If you enjoyed Joshua Dalzelle’s first book of the series, New Frontiers, then you’re going to enjoy more of the same in this second book of the Expansion Wars trilogy.

One of my biggest complaints about the first book that was we got so little about the aliens. Iron & Blood does give readers a bit more about the Darshiks and Ushins. And the ending of the book promises even more insight into the mysterious aliens.

Readers who enjoyed the first book of this trilogy will no doubt enjoy the second book. On top of space battles, Dalzelle shows us he can make ground combat just as exciting.

The Darshik invade a human colony in the Juwel system on the edge of human space. Captain Jackson Wolfe is tasked by CENTCOM with bringing relief forces and supplies to defend the colony with an antiquated Assault Carrier.

His supporting task force is also comprised of three last-generation destroyers commanded by a captain known for his cowardice. Everyone expects the task force to fail like the previous two task forces, so Captain Wolfe has to perform yet another miracle.

Senior Captain Celesta Wright and Jackson Wolfe must run a Darshik blockade comprised of a superior number of Darshik ships. On top of that, a Darshik stealthy ship is hunting down Terran ships.

Senior Captain Wolfe is recalled into command of an old Assault Carrier to deliver relief troops and supplies to the Juwel colony.

Senior Captain Wright also has a mission in this book.

We learn more about the agent or spy Pike and his role in the story or future of the Terran Federation.

On the planet is Sergeant Willard Barton and his marines who have to defend against the Darshik with limited supplies and weaponry.

The majority of the book takes place around the Juwel system, Captain Wright’s ship the Icarus, and Captain Wolfe’s ship, the Aludra’s Star.

My main gripe with the first book was the lack of information about the Ushins and Darshiks. But Iron & Blood manages to give us more detail about these aliens, and their relationship was a little surprising.

I particularly enjoyed the exploits of Captain Celesta Wright and her ship the Icarus in this book. We get more space battles between the Icarus and the Darshik cruisers, and we get some exciting planet-based combat.

It was agonizing reading along as Captain Wolfe had to deal with the initially incompetent task force commander. His cowardice was not only aggravating, but it also drew out the battle. I suppose the saving grace is that we get to see more of Captain Wright blow up alien ships.

Learning about how Captain Wolfe has to adapt his strategy and maneuvers was also a nice contrast to Captain Wright’s destroyer strategies. We learn firsthand the different tactics captains use when commanding ships that serve vastly different purposes.

Agent Pike gets more attention in this story, and we learn a bit more about his motivations and loyalties. His character isn’t as well developed as Captain Wright or Captain Wolfe. Maybe he needs to be put in more dangerous situations in order to allow his character to really develop.

As he is now, he zips around in his stealthy ship performing his spy duties. It’s not the most glamorous job, and avoid detection as a spy may come across as weak or cowardly to some readers.

There’s probably a novella in Pike’s little trip to the Eastern Star Alliance. We learn a bit more about what the enclaves are up to, but their goals are still a mystery to everyone, including readers. Having a short story that focuses on Pike’s exploits as a spy would go a long way toward fleshing out his character.

Still, the enemy you fear is the one you don’t know, and there are more unknowns with aliens than with another group of humans.

I’m looking forward to the final book of the trilogy. I know that I’ll enjoy it as much as I did the first two, if not only to see this whole war come to a happy conclusion.