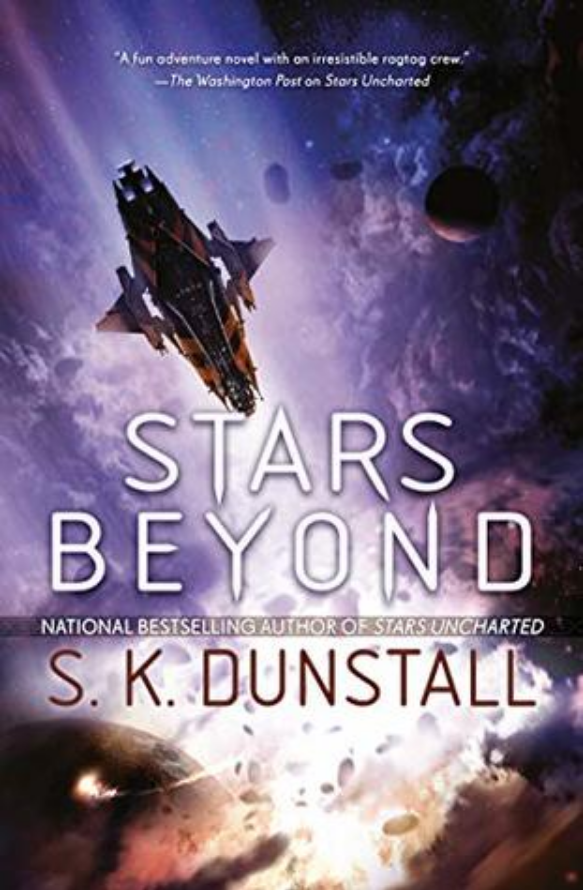 Josune, Nika, and the crew of Another Road attempt to hide from their pursuers while trying to save Captain Roystan from death. Alistair Laughton, a former Justice Department agent, searches for Nika in order to save his friends.

Stars Beyond by S. K. Dunstall is a great story that continues the saga of Josune, Nika, and Alistair. These three characters are developed well throughout the story. Their backgrounds and faults make them very relatable. As well as the protagonists are developed, the other characters don’t quite get the same attention to detail in this sequel, and they’re relegated to the background.

Stars Beyond doesn’t seem like a science fiction story to begin with. There are science fiction elements, to be sure. The body modifications or gene editing, as well as space travel, contribute to the futuristic feel, but at its heart is a story about people who are trying to run away from their pasts. And as inevitably happens, the past catches up with people.

The book switches plots between the crew of Another Road and Alistair Laughton as they each pursue their objectives. Josune and Nika try to surreptitiously obtain a state-of-the-art gene editing machine in order to save Captain Roystan.

Meanwhile, Alistair Laughton searches for Nika in order to save his friends on a distant colony. These two stories take place independently until they converge later in the book.

The antagonists of the story seem to have some strange motivations. Snow’s pursuer, a captain of the mercenary ship, is motivated purely by vengeance, and it seems a bit obsessive to spend so many resources just to hunt down one person even given his rationale.

What Stars Beyond does really well is to further expand the universe that these characters reside in. And as the story progresses, this society appears more and more corrupt: companies seek only to exploit people, and these companies are abetted by the Justice Department. Even agents in the Justice Department are corrupt, as one encounter illustrates.

Of course any institution that is created and funded by the corporations is going to have the corporations’ interests at heart, so the Justice Department is essentially a police force for the wealthy. Perhaps there’s some social commentary here.

In addition to the corruption, the companies show their true colors, valuing machinery more than people. It’s a universe that is lacking in morals and compassion, and within this universe is a cast of characters, who though flawed themselves, try to create a better place. In many ways, the search for habitable worlds and transurides has created a sense of the Wild West where treasure seekers risk their lives for the promise of wealth.

The search for transurides is pretty interesting, and key plot elements introduced in the previous book, Stars Uncharted, are resolved here. For instance, readers are provided with some revelations about Roystan. And the quest to help Roystan brings the crew of misfits even closer together.

The conclusion of the story is satisfying and the reveal about Alistair and his colony leaves a lot more to be desired. The author foreshadows where the next book will take the crew of Another Road, and the next story promises to be very interesting considering the conclusion.

Stars Beyond by S. K. Dunstall is a fun story with an engaging and lovable cast of characters who are searching for their fortunes in a corrupt society while avoiding their pursuers. It’s not a story that delivers page after page of action, but it also doesn’t rely on action as a crutch in order to keep readers interested. The conclusion of the story only further opens up the protagonists of the story to the new wonders of the universe.