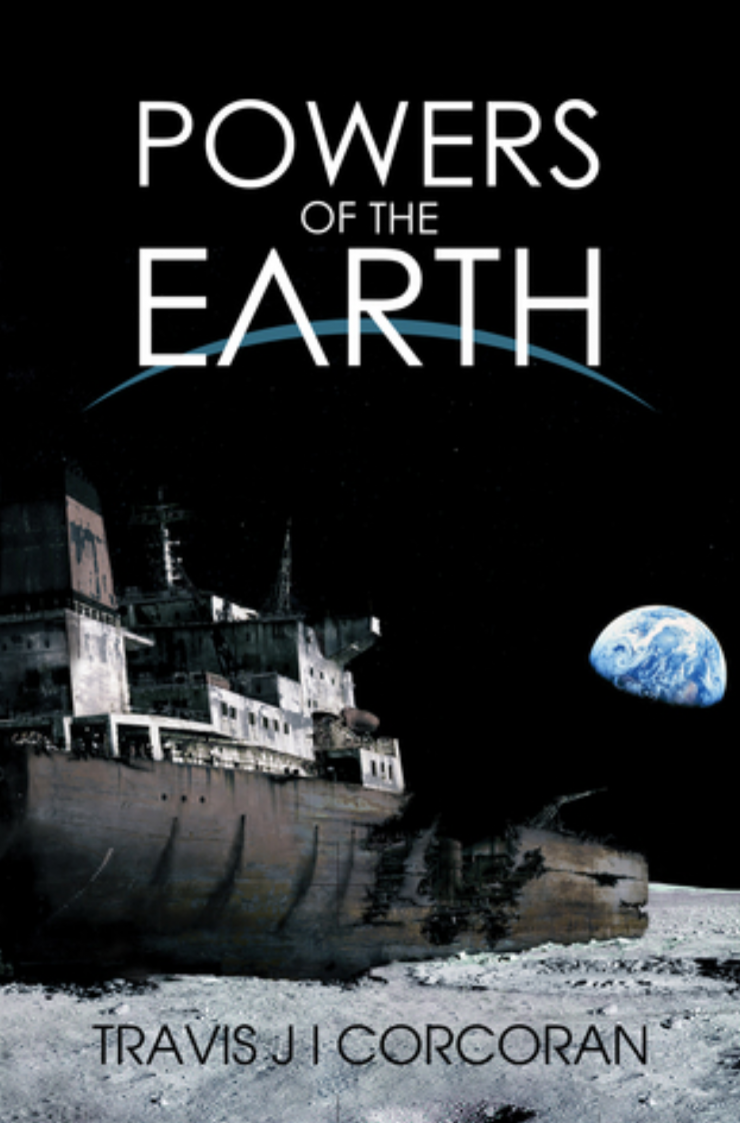 The Powers of Earth (Aristillus Book 1) by Travis J. I. Corcoran

The colony of Aristillus, the artificial intelligence Gamma, and the intelligent dogs have to defend themselves from the political and military maneuvers of the United States president bent on controlling the colony and its resources.

I didn’t have any expectations going into this story. I knew from the title that it’d be related to the moon, so it wasn’t surprising to learn that the story revolved around the relationship between a seemingly corrupt and diminishing earth government and moon colonists-anarchists.

Throw in an artificial intelligence and some genetically engineered super dogs, and you have the major players in this book.

A group of CEOs who were on trial for being capitalists escape to the moon to establish their own colony. The colony of Aristillus has no central authority, and the major influences are the various CEOs and their companies.

At present, the companies work together to the mutual benefit of the colony. Even though there’s no central government, businesses and residents appear to get along well.

Aristillus is also home to a genetically modified dog species that is super intelligent as well as the artificial intelligence Gamma.

But tensions between Earth and Aristillus soon come to the open when President Johnson seeks to control the wealth in Aristillus to guarantee her election and cement her power.

Mike Martin, CEO of Morlock Engineering, is the head of the group of CEOs who make decision for Aristillus.

Other notable CEOs include Javier Borda and Mark Soldner.

President Thema Johnson, of the Populist faction, is the President of the United States.

Senator Haig is another powerful and influential character.

Other notable characters include Ewoma and John and the dogs Blue, Rex, Duncan, and Max.

The story takes place in a moon colony located in the Aristillus crater. The colony is named after the crater.

The Powers of Earth Review

The description of the book suggests that it’s a conflict between competing political and economic theories. That’s one way to look at the story, though I think that reading this story through a political lens will reduce your enjoyment if you have particularly strong emotions on that front.

From a story perspective, the plot isn’t necessarily new. Many science fiction stories or shows have space colonies that declare independence from Earth. We see tensions between Earth and her colonies even today in shows like The Expanse and especially in the books. One could even argue that it’s inevitable that colonies outside of Earth would want independence after enough time passes.

It seems like this book establishes the setting and the action for the next book in the series. The pacing can be a bit slow because readers are learning how Aristillus works and who the major players are, as well as the political and economic climate. As a result, sections of the story can be “boring.”

The addition of Gamma and the dogs really give the story a unique twist that would otherwise make it a slog to read. For some people, reading is a form of escape, and they don’t want to read a science fiction story that boils down to just political drama. There’s enough of that in the real world and through other books or shows.

Some interesting aspects of the book include the dogs and the games they play. It appears to be some kind of online multiplayer game. I don’t recall if it’s connected with Earth since the latency between Earth and the moon would make it difficult. But the dogs seem to enjoy their virtual reality game, and the dogs even come up with a creative use for the game.

What was more engaging for me was the story of the dogs. We learn very little about dog society, and their antics and personalities seem more realistic and dynamic than the human characters. I think I felt more for the dogs than I felt for some of the people in the story.

The artificial intelligence Gamma was also interesting, especially the suggestive parts of the story that reveal how vast Gamma has grown. We learn that Gamma has a penchant for self-preservation, and its vague statements give an air of mystery and intrigue to the book.

Despite the fun addition of the dogs, I don’t really see how they relate to the overall story. I don’t feel like they contribute to the plot except to say that the dogs are a reminder of an ethically questionable experiment on Earth.

I imagine we’ll see Gamma and the dogs play a more prominent role in the next book. Otherwise, we could do without them and focus more on developing the human characters. I didn’t find many endearing characters in the story outside of the dogs and perhaps John and possibly Ewoma.

If you can get past some of Mike’s stance on politics and economics, I think you’ll enjoy the book. The second book in the series promises to be more exciting, especially because of the escalating conflict between Earth and Aristillus.

Read reviews on other books in the Aristillus series.

2017 Aristillus Book 1 The Powers of Earth Travis J. I. Corcoran