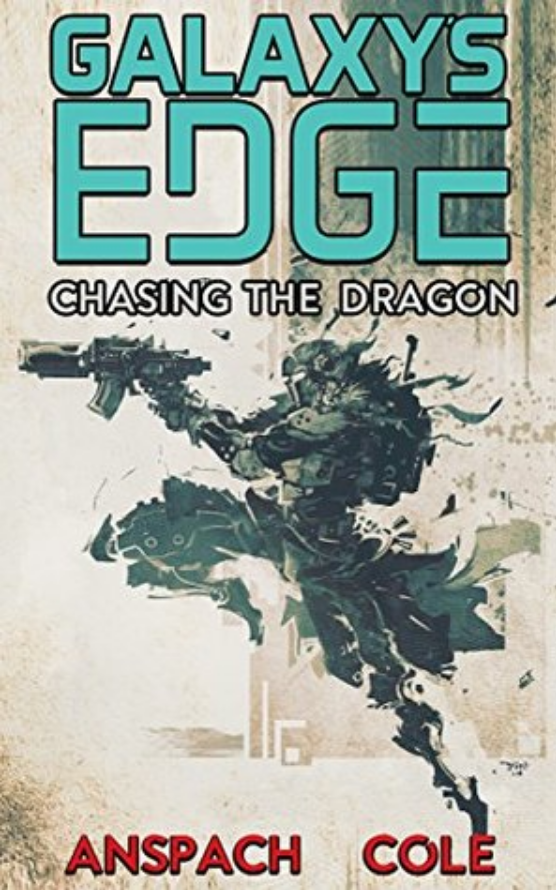 Tyrus Rechs chases down public enemy number 1, The Dragon, to save him from the army of bounty hunters, Nether Ops operators, and fortune seekers out to collect on the bounty so massive that it exceeds even the price on Rechs’ head.

This second book fo the Tyrus Rechs series is a little weaker than the first. While it contains the same action that we’ve come to love in the Galaxy’s Edge series, the book doesn’t quite develop Rechs’ character as much as I would have hoped.

Still, I enjoyed the writing and plot, but I would have loved to learn more about who Rechs is.

The Republic puts out a bounty on The Dragon that surpasses the bounty on Tyrus Rechs. Rechs moves to save The Dragon before the galaxy’s bounty hunters, Repulic Nether Ops, or anyone looking to score a massive amount of money can collect.

The main character is Tyrus Rechs, but his crew G232 and ship AI Lyra are included. Other characters include The Dragon, Gabriella, and a Nether Ops agent.

The story takes place on the galactic edge of the Republic.

Tyrus Rechs fits the stereotype about badass science fiction bounty hunters who populate science fiction universes from Star Wars to Firefly. There’s no quantitative measure of his ability like draw time, strength, and fighting ability, so Rechs is free to kick ass without limitations.

One common encounter with Rechs includes a fairly cool description of the enemy. Say, the enemy has a cybernetic arm that allows him to draw and fire faster than any human. Or the enemy is known to have executed thousands of sentient beings with his bare hands. Or the enemy is 10 times larger than Rechs and carries a weapon that is larger than the average human. Regardless of how these enemies are described, Rechs is able to easily dispatch them with his own superhuman abilities.

One of the downsides with writing prequels is that ultimately, you know the character’s fate. The purpose of a flashback then shouldn’t necessarily be to further elaborate on how tough and cool Rechs is. Instead, we should learn about how Rechs became Rechs. Maybe some more background on Rechs, the renowned general of the Republic, would be better than Rechs, the bounty hunter taking on random contracts.

Whereas the first book in this series showed readers how Rechs got his AI and G232, the second book doesn’t really provide more much information about Rechs. In this regard, the character development is a little poor, though what we learn about The Dragon does provide some interesting information for later events in that story universe.

Some tantalizing bits of information that the authors allude to but don’t quite cover: Rechs’ part in the founding years of the Republic. Rechs’ need to form the elite Nether Ops team that is now hunting him, and Rechs’ mental degradation. There’s a lot to go over, so I hope we learn more about Rechs or the history of the Republic in future novels.

Still, I did enjoy the story, but I didn’t quite appreciate the interruption of the redacted memos. I felt those memos interrupted the flow of the reading more than they provided necessary information. I’m a bit ambivalent about that particular story device.

There’s a lot to like about the story. Project Phoenix and The Dragon provide good examples of the corruption that has infected the Republic. Rechs’ mental state is a little worrisome, as that leads me to question how Rechs is able to survive all these intense battles when there’s a constant battle within his mind. The authors attribute his success to instinct and experience, and that’s a reasonable enough justification considering his 2,000 years of life experience as a soldier.

I’d recommend this book if you’re a fan of the Galaxy’s Edge series. But if you’re in the middle of an excellent science fiction series already, I wouldn’t be in a rush to read this second book in Tyrus Rechs: Contracts & Terminations. Instead, read Chasing The Dragon when you’re done with whatever you’re currently reading and want to to get caught up.

Read the review on Requiem for Medusa, Book 1 of Tyrus Rechs: Contracts & Terminations.