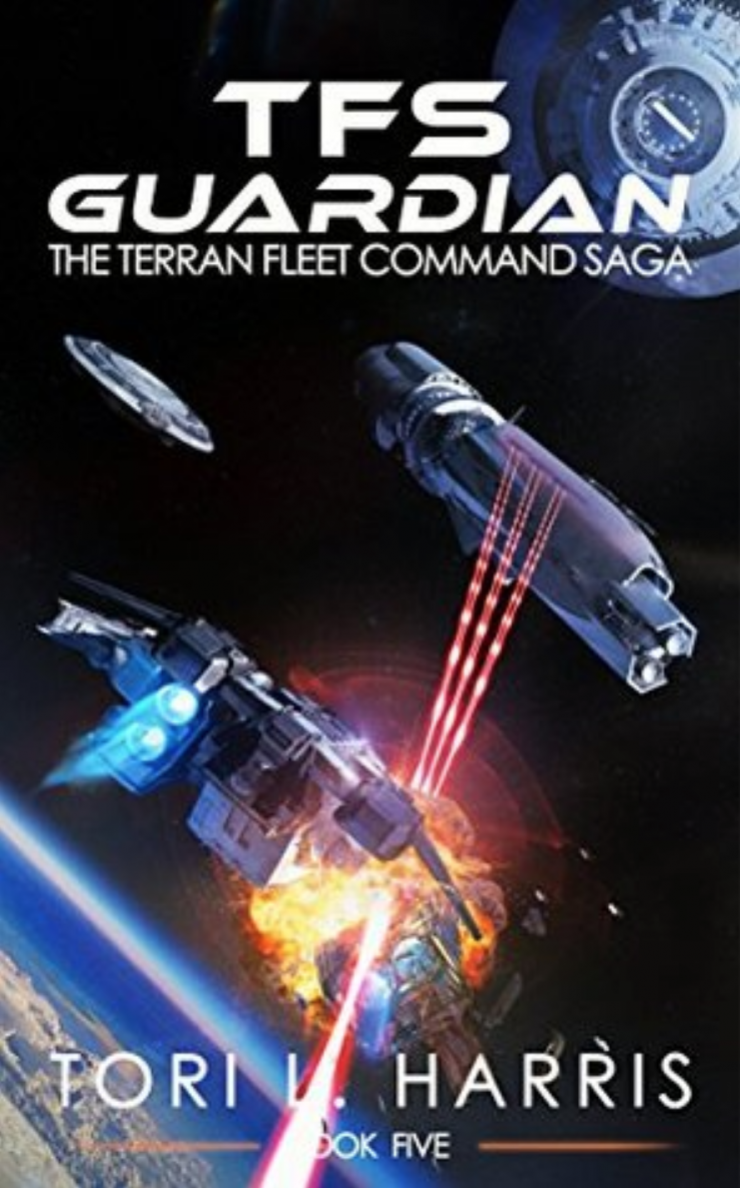 The Pelaran AI has subjugated Pelara, and the Pelaran Alliance is effectively disbanded. Earth and its alliances must free Pelara from AI control.

I’ve read all of The Terran Fleet Command Saga, and TFS Guardian by Tori L. Harris is perhaps the most interesting by far because it gives readers more information about who the Pelarans are. What’s also interesting is the idea that humans and other humanoids are immigrants, leading readers to really interesting questions about origin.

The Pelaran AI has subjugated Pelara and its citizens for centuries under some corrupted idea of protection. As a result, Pelara’s allies have all but abandoned the alliance, leaving the AI in control of the Pelara and its advanced fleet of Guardian ships.

Earth, Graca, and the Greys work together to save Pelara and themselves from the AI’s control.

Many characters from the previous book make their return to this book. Captain Tom Prescott and TFS Fugitive play a critical role in this book. Griffin, the GCS ship, plays an important role as well.

Other characters include Creel, a Pelaran, the Grey alien Rick onboard the Ethereal, and Prince Rugali Naftur of the Crowned Republic of Graca.

The majority of the story takes place in the Sol system near Earth and Pelara.

TFS Guardian by Tori L. Harris delivers a pretty decent story that weaves UFO mythology from our world into the story universe. The result is an expansion of The Terran Fleet Command Saga to open the plot to perhaps more exploratory plots rather than just military ones.

Including elements from the abduction and UFO communities, like beam technology, lost time, and reference to the moniker “The Watchers” is a fun nod to the those who read or keep up with that field.

What I found particularly interesting about the book was the claim that all humanoids in the Milky Way galaxy are colonists from an even more ancient and advanced progenitor species. Even the technologically advanced Greys, old as they are, come from this original species. This one small part of the story, almost an afterthought, intrigues me enough to look forward to future books.

Other aspect of the book I enjoyed are the development of Griffin as a character who grows beyond just programming and the contextual information about the Pelarans. Previous books painted the Pelarans as callous and arrogant, but the plot surrounding Doctor Creel shows readers otherwise. The Pelarans (and even the Greys) are just as human as humans.

In fact, I’d even say that the Greys in this book have more personality than the humans. Rick’s jovial personality really seems to be in stark contrast to the clear absence of personalities associated with the Greys reported by people.

One of my criticisms about Harris’ writing is that all of her characters exhibit the same kind of personality: stiff, bland, and overly polite. Rick’s character reveals to us that Harris is fully capable of writing interesting, even lovable, characters. I hope that future characters are written with as much personality.

The kind of stiff writing we see in the dialogue among the humans does tend to dull the action scenes in the story. It’s difficult to feel tension and action when people are polite during the heat of battle.

The heroes of TFS Guardian aren’t the humans. Sure, TFS Fugitive plays a critical role in protecting Earth and dealing a blow to the Pelaran AI, but it’s Griffin and the Gracan capital ship that save the day. The aliens’ actions suggest a future wherein all sentient beings can cooperate and thrive in this vast universe. That’s a really positive message that readers don’t often get in military science fiction stories.