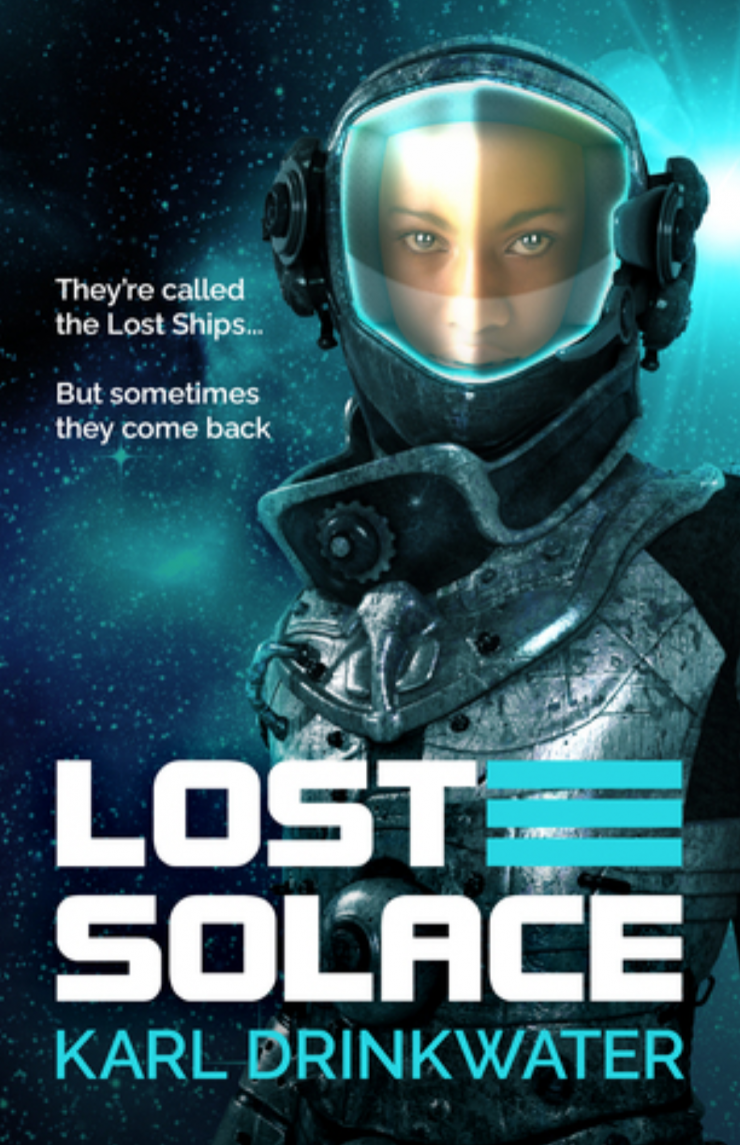 Opal, a soldier, steals a military vessel with an advanced AI in order to hunt down a Lost Ship to search for something that she desperately wants.

I’ve read plenty of military science fiction books, as readers of this site likely know. Lost Solace gives readers a decent science fiction story, but I felt lost since we’re never quite clued into what the main character’s goal is until far too late in the book.

Still, there’s a lot of action, and the aliens on the Lost Ship raise some questions that I hope will be answered in subsequent books.

Opal steals an advanced military ship with a super secret AI in order to search for something on a Lost Ship in decaying orbit around a neutron star.

The two main characters are Opal, the protagonist, and Clarissa, the ship’s intelligent AI

The story takes place around in a neutron star system that has a Lost Ship in decaying orbit.

Drinkwater delivers a solid science fiction story with a decent amount of action and an interesting plot.

One of my biggest criticisms about the book is that readers aren’t clearly made aware of the motivation behind Opal’s search until the end of the book. As a result, I felt a bit lost while reading—what, exactly, was Opal searching for and why was she willing to risk her life?

During life-and-death moments, Opal seems almost too willing to give up. Without a strong motivation, the protagonist’s actions just seem weak. If Opal has a strong motivation, like say saving a family member, then she’d strive to survive regardless of the situation. If she’s just looking for a big payday, as the story implies, then giving up easily would make more sense.

Despite that criticism, I did enjoy the story. It’s a little weak in terms of the character development and interaction, but the concept of the Lost Ship and the other dimension is intriguing for me. The author promises a lot more about the phenomenon behind how ships become Lost and where they’re “Lost.” It helps that the stowaway, acting as an omniscient god, can provide answers.

The sequels promise a lot more intrigue and answers to the question that seems to plague the story universe, especially regarding the Lost ships. I was a little uncertain about the method of travel. If crew members have to go to sleep in some hibernation state, then what does that mean about time? The story doesn’t make clear what the consequences are for aging or time.

The action in the book was okay, though it felt lacking in some parts, especially with the beings that occupy the lost ship. The behavior of those beings was certainly unexpected, and I’m not sure how I feel as a result, especially given what is revealed toward the end.

Perhaps the best element of the story is the mystery that the author nurtures throughout Opal’s journey. As we tag along with Opal through her discovery of the lost ship, her interactions with Clarissa, and her exploration of the lost ship, we learn bit by bit who she is and what she’s after.

I hope that the answers in the next book answer those questions in a satisfying way.