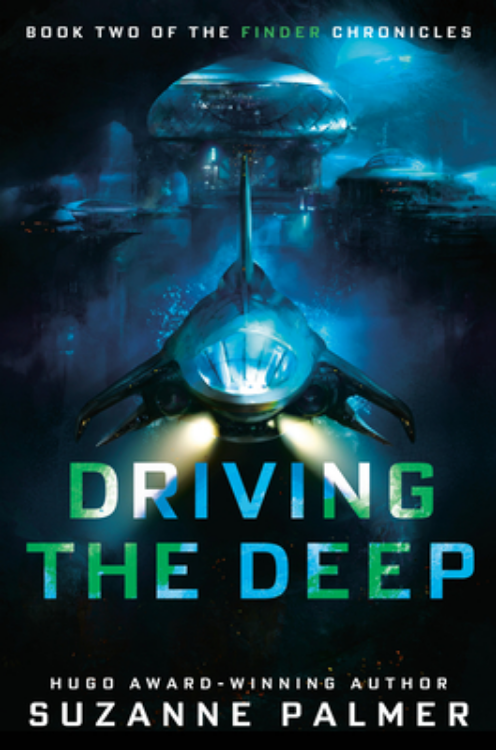 Fergus Ferguson is entangled in another conspiracy, but this time, it involves his friends from the Shipyard. Fergus must now save his friends with an unlikely detective ally.

Driving the Deep by Suzanne Palmers delivers another action-packed and suspenseful story starring Fergus Ferguson. But this time, readers get to meet his storied friends from the Shipyard, while characters from the first book make a cameo appearance.

The writing in the book is done well, with the words flowing and making for smooth reading. Many readers know that writing styles, grammar aside, can impact a story’s flow, making it that much more difficult to get involved with a story. The dialogue in Driving the Deep is realistic, contributing to character development.

What I’ve enjoyed about the Finder Chronicles thus far has been the variety of aliens mentioned in both stories. But while the series universe is populated with aliens, they don’t really play a big role in the story save as oddities or as extras on the set. Readers are introduced to a few more aliens in this sequel, and for all intents and purposes, they are just as mysterious as the aliens who modified Fergus in the first book.

Despite the dearth of information on the aliens, the brief introduction to the Shipyard characters at the beginning of the story is endearing, making the protagonist’s reason to search for them that much more motivating. Palmer does an excellent job in writing characters who are interesting and who readers want to like, or in the case of Pace, the antagonist, hate.

As with the name of the series, Finder Chronicles, the plot shouldn’t be too surprising. Instead of a stolen warship, Fergus has to find his friends. But there’s also a promise here of the mystery regarding Fergus’ motorcycle, long placed in storage. It, too, is missing, and in its place another mystery appears.

What Palmer manages to do well in Driving the Deep is lead readers along a mystery that slowly unravels, giving readers just enough during the investigation to keep from losing interest. The investigation leads Fergus to interesting locales, and the different places Fergus visits adds to the intrigue of the story.

While Fergus seems capable enough, especially with the Asiig’s modifications, his uncanny ability to solve mysteries or riddles seems perhaps a bit too convenient. For instance, Zacker is a thirty-year veteran detective, yet he’s unable to solve the Met mystery. While the premise for Fergus’ return to Earth seems a little shaky, it’s blended well into his character story and the conclusion of the novel.

Driving the Deep by Suzanne Palmer is an excellent sequel to Finder that continues the story of one Fergus Ferguson, whose job it is to search for missing things. Along the way, and seemingly without intention, Fergus discovers friendships with fascinating people. With this exciting sequel, the Finder Chronicles establishes a strong foundation and cast of characters, making readers anticipate the next book that much more.

Read a review of Finder, Book 1 of the Finder Chronicles.