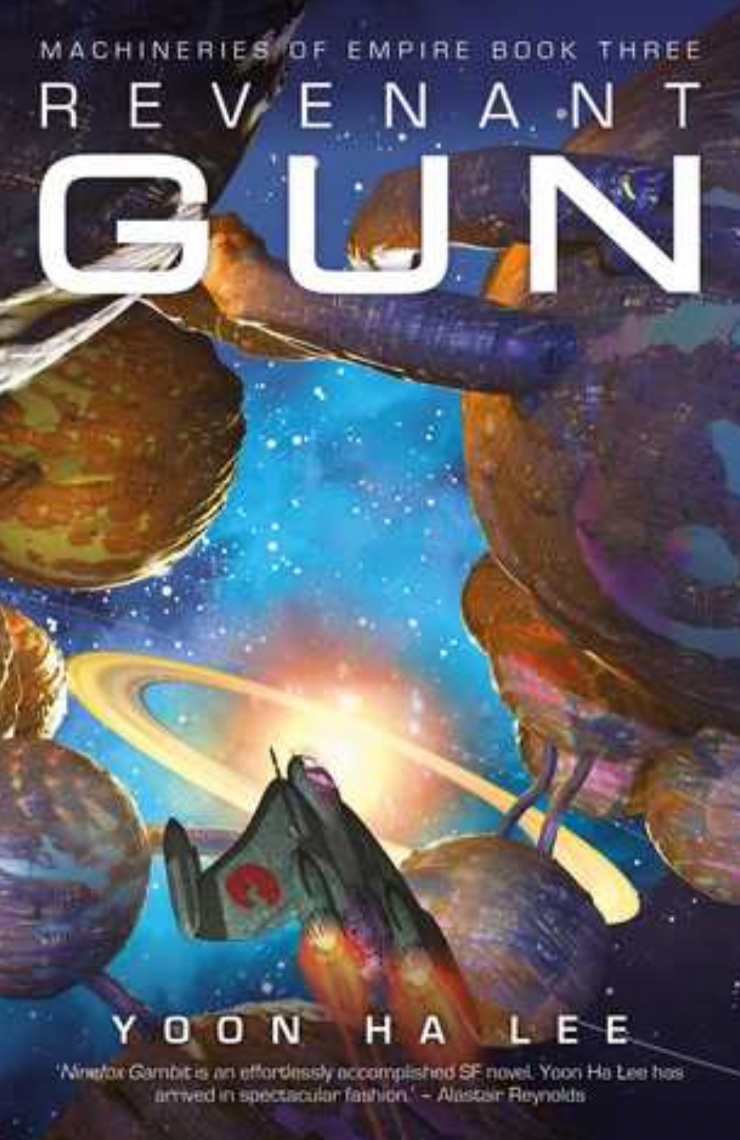 A young cadet Shuos Jedao wakes up and find himself in the body of an middle-aged man. Hexarch Nirai Kujen explains that the Hexarchate is fractured and he needs Jedao’s help to reunite the empire.

One interesting aspect of this book is that it provides more insight into the universe regarding gender and relationships, specifically with regards to High General Brezan and Jedao.

This is a satisfying conclusion to the series, and I’m happy that it ends on the note that it did since it seems like any other extension of the story may seem forced rather than natural.

This story takes place 9 years after the events of Raven Stratagem. Since the previous book, the empire is split into two factions: the Compact, headed by High General Kel Brezan, and the Protectorate, people loyal to the traditional calendar led by General Kel Inesser. Hexarch

Shuos Mikodez allies himself with the Compact. Cheris, with her memories of Jedao, disappears from the Compact.

There’s some tension between the Protectorate and the Compact, but there’s also an uneasy peace because of the potential for an invasion from the outside.

Most of the characters from the previous book carry over into this one. However, this time, we see two versions of Jedao at play: the young cadet and the memories of Jedao that Cheris carries with her.

We’re still in the same setting as the previous 2 books, but the Hexarchate is now divided into two major factions with Kujen representing a third force.

The one characteristic that stood out the most to me is the revelation of gender roles and identities. Many science fiction writers tend to take a more progressive approach to gender identities. After all, aliens may not have the same beliefs and attitudes toward gender roles or identities as people have.

In that regard, I was surprised to learn about Brezan and Jedao. Though the story hinted at Jedao’s sexuality and identity, it wasn’t ever made clear until this book. In retrospect, it must have been interesting for Jedao to inhabit Cheris’ body. Discussions of relationship, marriage, and children reveal a little about the familial structure in the Hexarchate.

One of the criticisms I have about the book is that we never really learn about the mechanics of the weapons of war. The spaceships, or moths, aren’t clearly explained save for the brief mention about their capture and harnessing. And why are they better or worse than mechanical ships, which the Hexarchate is clearly able to build. And why not enhance these ships with whatever technology or magic that powers the seemingly terrifying weapons of war?

Some aspects of the story are left undeveloped. What happens to those powers outside of the Hexarchate is unclear, though the citizens can now choose their own fate instead of being forced or compelled to behave. I suppose in a way, it’s better to choose the manner of your death rather than have it chosen for you, as far as the Kel are concerned. For instance, the Hafn seem to have completely vanished, whereas they comprised a good section of the previous book.

Also making a more prominent appearance are the servitors. These helpers also long for the freedom that Cheris is fighting for. What’s interesting is that the overall theme of freedom is being reinforced on several fronts: the Kel, the servitors, and even the moth ships. Cheris’ victory, then, is a statement of freedom’s ultimate victory over oppression.

The irony is that the pursuit of freedom costs Cheris her own individuality. She’s shackled to the memories of Jedao, and it’s difficult to say whether she would have taken on the role of freedom fighter had it not been for Jedao. So the question of whose idea it is to fight the Hexarchate is still not quite answered.

The characters deserved or earned the way the story was concluded. There’s a sense of completion with the roles that both versions of Jedao occupy. I can’t think of a more fitting end for Jedao and Cheris.

Overall, I really enjoyed the story. I think I may have enjoyed it even more knowing that this was the last book in the trilogy. That’s because I couldn’t really see where else the story could have gone without adding more filler.

The story provides a nice conclusion as to the fate of the Hexarchate and its citizens, and it leaves readers with a satisfying feeling of completeness about the trilogy.